CES 2011 Leftovers: A little here, a little there

IF YOUR COMPANY invented the shoebox PC and made it famous, at a trade show, you stick with what you know, and what you are known for. At CES, shuttle showed off a lot of variants of their Shuttle box, and a few new things on top of that.

First up is a new take on the top end Shuttle H7 line. The current H7 line is an X58 based gaming-PC-in-a-shoebox, quite the amazing feat if you consider how much heat an i7 and a few GPUs put out. The line was EOL’d a bit ago, but is being relaunched with added features. What is new? USB3 and SATA-6 for starters, plus minor changes all over. The new H7 Pro still looks like a standard ‘large’ Shuttle box though, and that is a good thing. 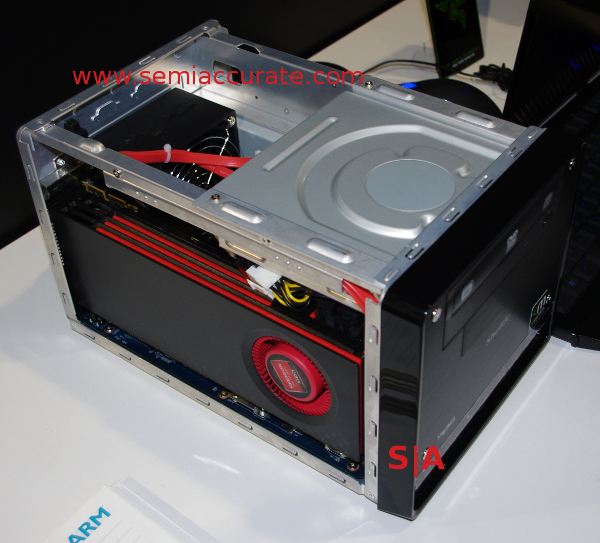 From there, we come to a new form factor, the H3. OK, it still is a shoebox, but this one sports a Sandy Bridge board and CPU, and is slightly smaller than the H7. Given the CPU difference, it is probably a bit faster, more efficient, but a little less expandable. Once Sandy Bridges start shipping again, the H7 should too.

Not one to ignore customer demands, Shuttle looked at the most common requests and designed the new J4. It is still the same rough shape, but the biggest feature is a customizable front panel. It has a clear front that you can slide a picture, logo, or misbehaving child behind, if you flatten them appropriately.

The J4 is about the same size as the G2 line, but due to the front picture frame, it has to go without the floppy/3.5″ external bay and a reset button. Oh woe is me. Other than slightly smaller power button and LEDs, it has everything the G2 does on the front panel. 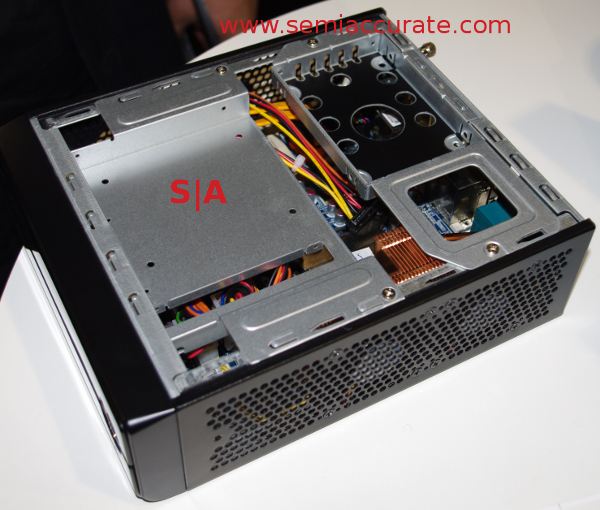 3-Liter form factors are nothing new, but they almost always are underpowered Atom-class machines or complete systems. Shuttle is going to break that mold by offering a full iSomething machine as a barebones in this form factor. If you want a specific HTPC config, you might want to look at this box. Better yet, there is a Sandy Bridge based XH61 coming before mid-year. I can see both being popular with the HTPC crowd.

One nice thing I was not expecting was an optional cooling system. We are told that all new Shuttle systems will have an option for Cool-It liquid coolers as standard equipment. A highly efficient and quiet water cooler in a shoebox with a Sandy Bridge, what more do you want?

Another thing Shuttle has been doing a lot of is helping VARs build vertical solutions around their PCs and barebones systems. One that stood out was a solution from eSommelier, it is a complete wine cellar management system, and sold as as a unit by eSommelier itself. 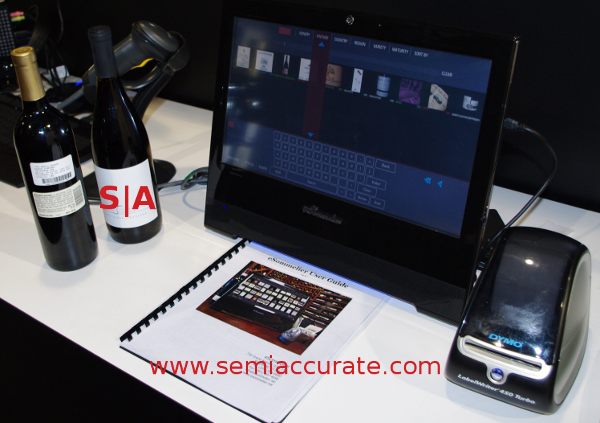 Shuttle wines, and we listen

It consists of a Shuttle All-in-One PC with the app loaded on it, along with a bar code scanner, label printer and sensors for temperature and humidity. The idea is that you can manage your wine cellar, print out labels for the bottles, and generally keep track of all the details in an automated way. Shuttle had a lot of vertical integrations like this at their CES booth, and is actively looking for others. They have the perfect boxes to build them with too.S|A