AT THE MSI booth in the middle of CeBIT’s hall 17, there was an AMD 6990 dual GPU card on display. There were no specs, and MSI claimed they didn’t have any either, something that is pretty common with the games GPU companies are playing of late. 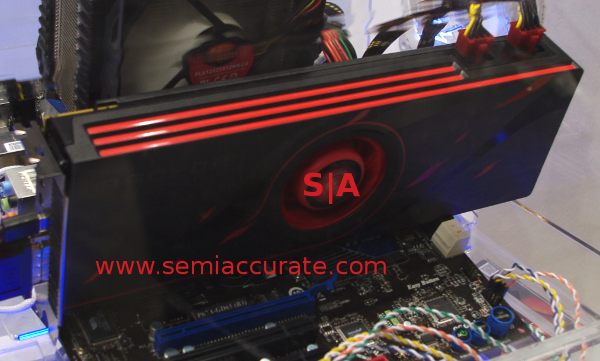 The card, walled off

About the only thing that we can say right now is that there are two 8 pin power connectors, meaning that it will ship with a sub 300W TDP forced by aggressively set Powertune limits, but can go much higher.

It will be seriously underclocked to get the numbers right, or at least internally capped to achieve the same thing. That should shock no one, the 5970 did that too, but without the fine grained power control.

The difference between the last generation and this one is that the ability do it gracefully is much less complicated in the 69xx cards. The converse of that is the ability to get the performance back is also easier. It will be very interesting to hear the final specs on this beast.

Word on the street is that this dual GPU beast will be launching in March.S|A