CeBIT 2011: Two new and too new, more before Computex

CEBIT IS WHERE Intel traditionally launches new chipset families, and they tend to ship a few months later at Computex. This year was no different, with lots of people showing off H61 and Z68 boards, and MSI was the first to talk to us about them. 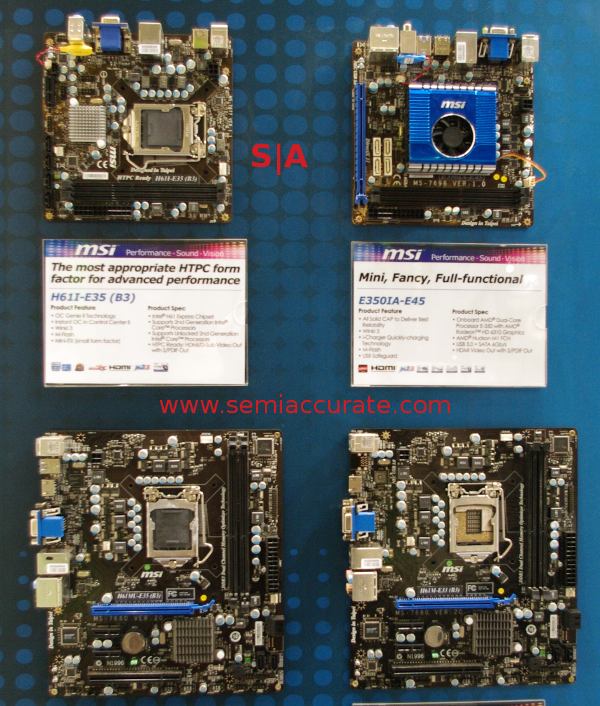 One of these boards does not belong

Three of these boards are H61 based, basically low, medium and high feature sets. On the top left, we have the H61I-E35, a mini-ITX HTPC board. It has a few more video out options, and is the high end of the bunch. Right next to it, we have the E350IA-E45, a Brazos board. To answer the question above, this is the one that doesn’t belong.

Below the H61I is the H61MU-E35, the ‘value seekers essential’ board. We are not sure what this means, but it is a full size board. To the right of that is the H61M-E33, something that seems to be the same as the H61MU-E35 but without USB3. Given the choice, buy the one with USB3, you will be glad you did, not having it isn’t worth the few dollars you save.

All of these boards are B3 steppings, so they will not be hit by the Sandy Bride/Cougar Point SATA issue that surfaced a month or so ago. Any H61 boards from MSI, and likely everyone else too, should be safe. If not, all the new ones are prominently marked B3, they will be hard to miss. 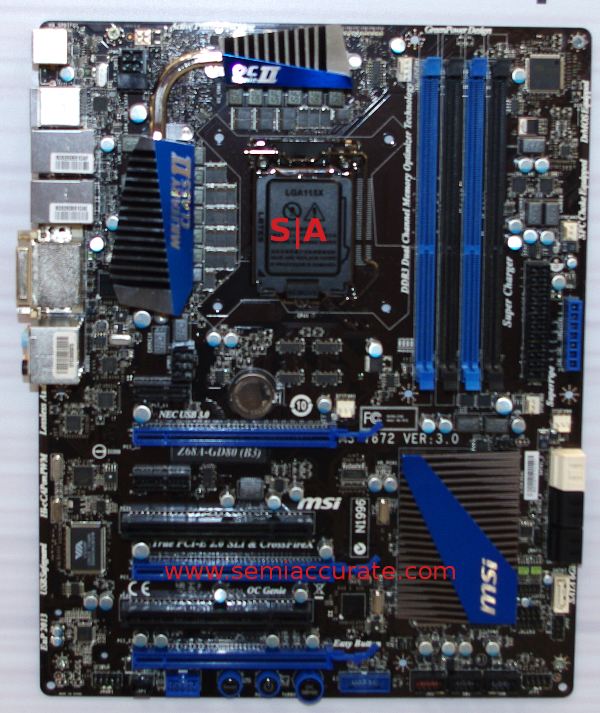 Z68 pops up too, officially

Moving way up the food chain, we come to the Z68. This is a top of the line socket 1155 board, and the chipset features a combination of both the P67’s ‘overclocking’, if you can call it that, and the H67’s graphics. If you are thinking that this is a Cougar Point chipset without any of the big fuses blown, you are dead on, that is exactly what Z68 is, everything in one.

The Z68 is shaping up to be the new enthusiast chipset-of-the-moment, at least until the socket 2011 boards come out later this year. The Z68A-GD80 brings the chipset’s features and adds, 12-phase power, 10 USB3 ports, 2 SATA6 ports, and a 2 eSATA ports to the mix. It is also a B3 stepping, or will be when it launches. This one seems pretty basic though, but by launch, there will undoubtedly be more enthusiast Z68 boards from MSI and others.S|A