SSDs get smaller and faster

Now down to about the size of a paper clip

The first, the U100 is aimed at the thin & light notebook market and the second, the iSSD, is destined to go into tablets and similar goodies.

The U100 has a maximum capacity of 256GB and some impressive specs. It can read data a 450 MB/s and write them sequentially at 340 MB/sec.

The iSSD is even smaller. As you can see from the photo it is about the size of a paper clip. The exact dimensions are 16mm x 20mm x 1.85mm and the maximum capacity is 128GB. The read speed is still 450 MB/sec, but the write speed is a bit slower at 160 MB/sec. both drives feature a SATA III interface. 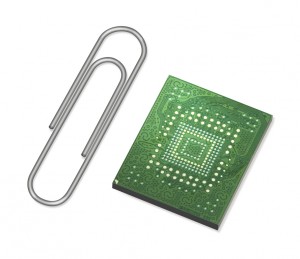 Although SanDisk does not mention prices in its press release, we should expect the small SSDs to compete heavily with mechanical drives – as they are very difficult and expensive to miniaturise.S|A