PCM shows off its usefulness

Still a prototype but getting there…

A group of students from Computer Science and Engineering department at the UC San Diego Jacobs School of Engineering have developed a storage array based on PCM (Phase Change Memory) that is seen by many as a successor to both dynamic RAM and flash memory.

The module that you can see in the picture stores 512MB of real data and an additional 128MB is used for error correction and metadata.

The total storage array has a capacity of 10GB.

This may not be much from a commercial viewpoint but keep in mind that this is a prototype and the first of its kind.

The array has some very impressive specifications. It can read data with up to at a maximum rate of 1.1 GB/s per second and write data at up to 371 MB/s. For smaller accesses (e.g., 512 B), Moneta can read at 327 MB/s and write at 91 MB/s, or between two and seven times faster than a state-of-the-art, flash-based SSD. 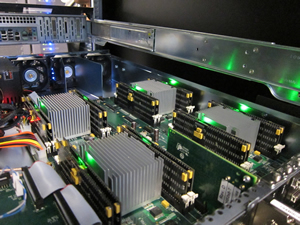 x has delivered the FPGAs that are used for the design of the controller hardware.