Supermicro had a bunch of cool new form factors to show off at Computex, including 8-way servers from Atom to Westmere-EX. The unofficial theme of the booth was once again density. 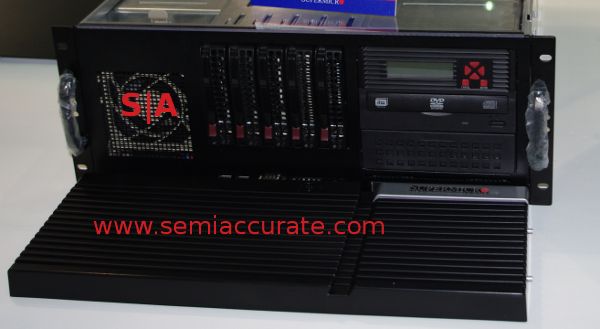 The new look of Supermicro

The first thing you notice at Supermicro is the new front panel, both the plastic shield and the LCD bay. The server it is in is the 842TQ-665B/865B, a 4U short depth industrial chassis with enough hot swappable bay options to satisfy most users. The interesting bits are the LCD display/controller and large front mounted fan. The interior can take a number of different standard sized mobos and has a full 7-year support lifespan.

Next up is the 2026GT-TRF-FM407, a 2U GPU compute chassis. It supports 2 Xeon 55xx/56xx, whatever that means this week, and has six DIMM slots. The nice thing is that it can take six dual slot GPUs in a 2U form factor, quite the density improvement over the normal 2 GPUs you find out there. To keep things from GTX590ing, the chassis not only has an 1800W redundant PSU, but also a 6 ‘heavy duty’ 8cm fans. There is an optional hose attachment for the back side as well, with full Paul Mitchell certification for speed dry and fluff. 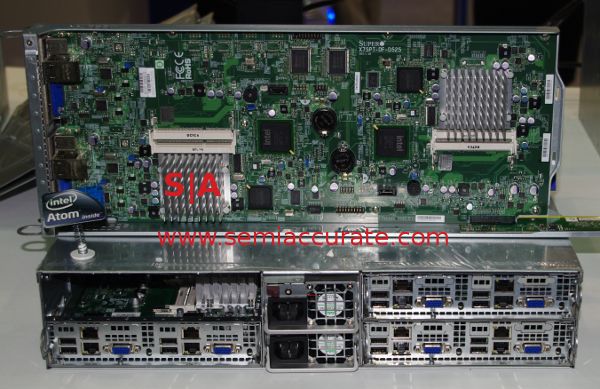 8 servers in a comparatively huge box

From there we go to a product that has me scratching my head, the Twin^3 Cube server, aka two 2U 2015TA-HTRF boxes in a 4U chassis. Each box has 4 tray, 2 dual core Atoms per tray, for a total of 16 Atoms per 4U. There are 3 SATA ports along and a Matrox G200eW GPU that I can’t spot for each Atom, so double that per tray. I’ll bet you thought that chip was long dead, eh? It just goes to show that great analog output quality can live forever.

The real question here is why bother? If you are going for density, and this is simply a density play, SeaMicro is the way to go. Atoms are far too crippled to do anything useful without going to custom hardware interconnects, so I see this box as going nowhere fast. The Twin^3 Cube seems like a paid for Intel stunt to point fingers at when asked if Atom has a chance in servers. 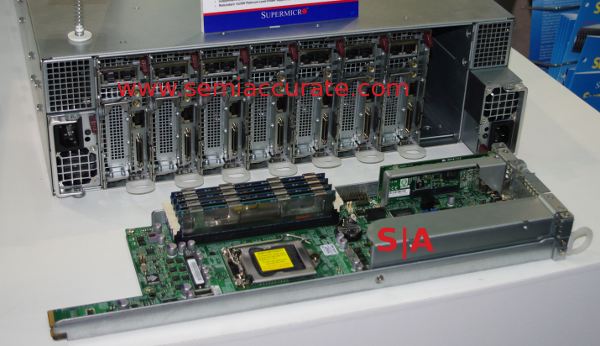 Why am I so down on the Atom blade/tray/cube/whatever? Well, if you don’t have SeaMicro’s density, you can easily get more cores per U with Sandy Bridge parts. The Twin^3 has 32 Atom cores, the 5037MC-H8TRF MicroCloud has, wait for it, up to 48 Sandy Bridge cores. The Twin^3 is 4U, the MicroCloud is 3U, but only has 2 SATA ports per CPU. Anyone think 50% more Sandy cores in exchange for a single SATA port is a bad trade? Yes, the Sandy pulls double the wattage, but at full draw, any guesses which does more work? Now you see why we say stunt? 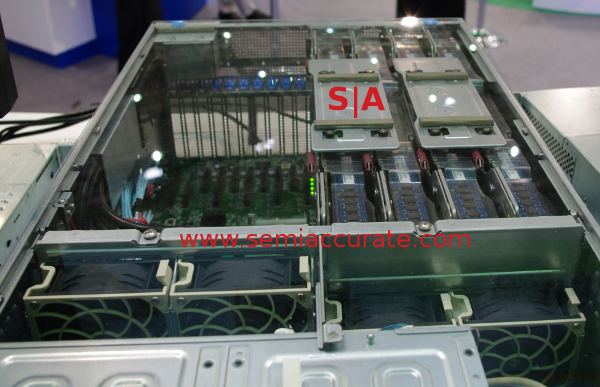 Becton in a white box

The last one is by far the coolest, the 5086B-TRF 5U chassis that fits 8 -EX class Xeons, either Nehalem or Westmere. That means up to 80 cores in 5U, 6 SATA ports, 16 hot swap HD bays, and10 full length PCIe slots for real RAID cards. The weak point? It will only take 2TB DDR3, hardly enough with Windows 8 looming. If you have been waiting for something that you can buy off the shelf that fully implements the spaghetti diagram we showed you two years ago, your wait is over.S|A