Geek on geek action in Austin

About two weeks ago, AMD (NYSE:AMD) held a ‘top sekrit’ Bulldozer overclocking event in Austin and smashed a few world records. SemiAccurate was there to provide a few critical support functions, as well as take pictures and annoy people doing real work.

The short story is that on August 31, 2011, AMD smashed the world record for CPU speed by a large margin. The old record, 8308.9MHz was destroyed by the overclocked Bulldozer, “Team AMD FX” hit 8429.4MHz, well over a percent up. If you think about it, this record is more remarkable because the old was set with a single core cacheless Celeron, this one is with a full 8-core bulldozer, L3 cache included. Not only does this new chip clock faster, but it also does it with 8 times the cores. 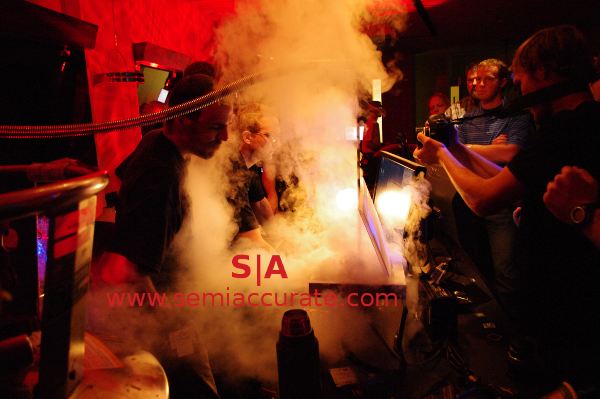 Smoke, fun, and cameras in Austin

If you want to read about the event, AMD has a blog up here. The raw numbers, new and old, can be seen on HWBot here, and this is a picture of a dog and a cupcake, awww, cute isn’t it? A picture of the actual score is below. 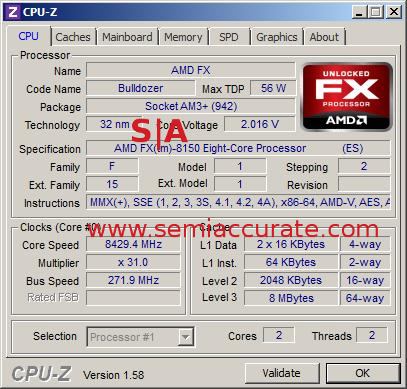 For those wondering what our ‘critical support functions’ were, the author did three things to make the event work out. He leaned on the Helium tank to keep it in place while obstructing Simon Solotko from reaching his Nitrogen tank, but we only count that as one. Also, there was a serious dearth of media wisecracking, so we ably filled that void, mostly in a fashion safe for work. Mostly. Last, we filmed it all for posterity, all while performing the prior two grueling tasks.

Not much more to say, record set from early silicon, and much more to come. We can’t talk about performance due to other non-expired embargoes, so that will have to wait. Yes, we know that sucks too. The official SemiAccurate video of the event is long, slow, lots of nitrogen but also has wisecracks included. Enjoy.S|A