Military grade data-at-rest encryption is now within your reach…

It seems that Kingston is looking to make waves in the flash drive market by introducing a product aimed at people with data worth hiding. Or just for those who have an enormous p0rn collection. The DataTraveler 6000 comes in sizes ranging from 2 GB all the way to 16 GB, offers transfer speeds of up to 11 MB/s read and 5 MB/s write. Where this USB 2.0 drive differs from the ones you can find at your local retailer is in its security features. “100 percent of stored data is protected by 256-bit Advanced Encryption Standard (AES) hardware based encryption…” This means that your data, when loaded onto this drive, is just as secure as the workstation you created it on. 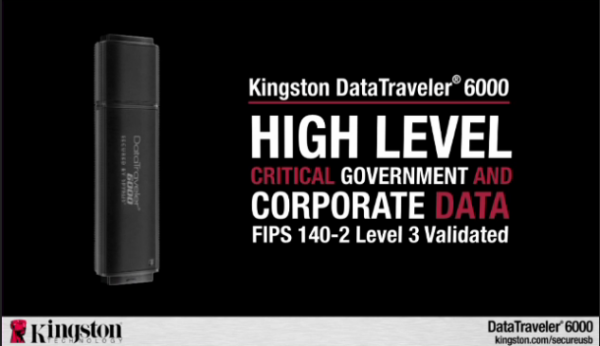 In addition to encrypting all of the data on the drive Kingston has also implemented what it calls an “Ultra-Strong Security Architecture”. The drive will lock down and destroy its encryption key after 10 intrusion attempts. It also uses Elliptic curve cryptography (ECC), which is not to be confused with Error-Correcting Code memory (ECC Memory), as part of the NSA’s Suite B set of cryptographic algorithms. All of these features fall under the marketing banner of FIPS (Federal Information Processing Standard) Level 3 Validated.

Now the DataTraveler 6000 isn’t Kingston’s first encrypted flash drive, with the DataTraveler 4000 predating it. It also does not exist in a vacuum, with companies such as Lexar and IronKey offering competing solutions. But it does offers an impressive set of features that should give it a leg up on the competition, and allow Kingston to increase their margins until the forces of competition bring the DT6000’s price into a more palatable range. $50 a gigabyte for the lowest model seems a bit steep when you can pick up a an unsecured drive of the same size for $6, but for the buyers that need their data secured with one of these devices it’s probably safe to say that money’s no object.  We’re sure a US military contract is in the offing.S|A