If you have been looking for a fanless desktop PC, Splitted Desktop was showing off a new heatsink to enable that at IDF. You can now run a fan-free, passively cooled machine without resorting to low power parts and the attendant performance loss.

The main innovation behind the new heatsink is a material Splitted Desktop is calling composite copper. It looks like a very thin walled copper grate, the innovation is how the mesh itself is welded together, not simply a copper mesh. In case you didn’t guess, they would not tell SemiAccurate how it is done, but it isn’t as easy as it looks. 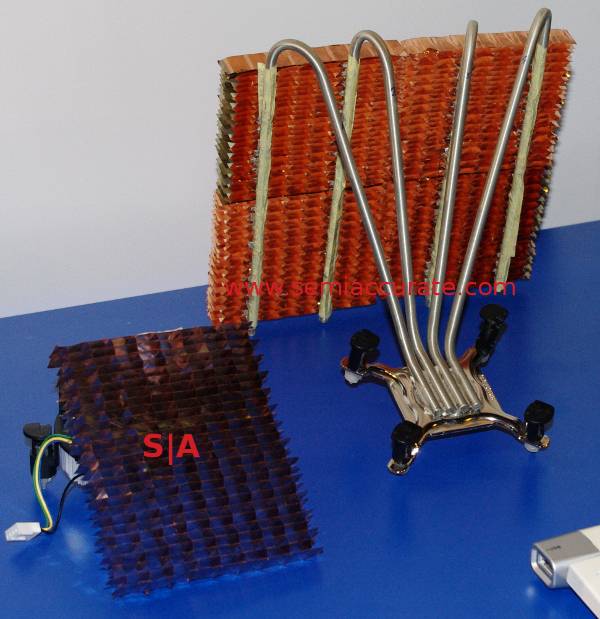 The material itself, and a heatsink made from it

From there, you take this very light copper grille, bond some heat pipes to it, and then slap a CPU plate on those. Splitted claims the efficiency comes from heating the air in three dimensions, but just looking at it, you can see that there is a lot of surface area to heat the air with.

At IDF, the demo used to show this technology off was a cube form factor PC called the Buoyancy Box. The idea is to suck in cold air at the bottom, heat it near the top, and have an open mesh top, basically a little material added to physically protect the heatsink itself. Hot air is vented out of the top, and the thermal energy from the CPU is used to pump air through the box. It is silent and maintenance free, no moving parts. 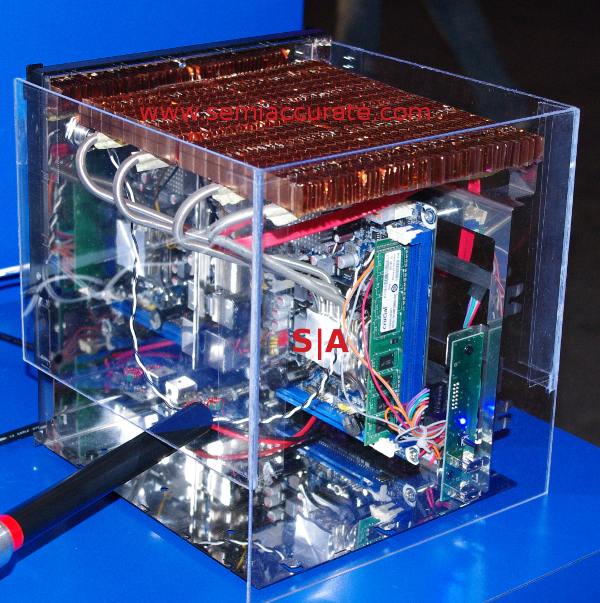 Throughout the show, the system above, minus the smoke generator used to show off the airflow, was looping Street Fighter IV 24/7 on a 45W i5. The board is a standard mini-ITX part, nothing special there, and the heatsink will take up to 95W CPUs before you need more area. Basically, you can put most non-XXXtreeeeem!!!! CPUs in the rig and it should just work.

With this type of heatsink, Splitted Desktop should be able to make a wide range of PCs for most uses, and make them dead silent. Throw in an SSD and CoolerMaster Hybrid PSU, and you have a silent, fan free machine that is, well, actually useful. The size isn’t that bad, about 1 cubic foot, and the components are lighter than ‘normal’ parts too. What’s not to like?S|A