Intel shows off HDR and AA in raytraced games

IDF 2011: Wolfenstien with rayguns and blooms

Raytracing took a step forward at IDF, with Intel (NASDAQ:INTC) showing off raytraced Wolfenstein again, with a lot more twists and features. While the features aren’t new to PC gamers, how they are done is cutting edge stuff.

Every IDF, Intel’s perkiest researcher, Daniel Pohl, shows off another variant of a raytraced game. Things went from Quake variants to Wolfenstein, and have stayed with that game for quite a while. That isn’t to say the engine isn’t massively updated every time it is shown, it is, and this time was no exception. 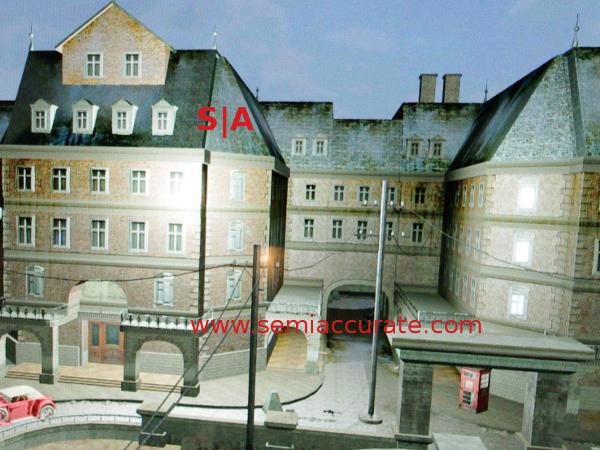 As you can see above, HDR effects are now possible with a raytraced game engine in real time, as was lens flare and similar effects not pictured above. While it isn’t an amazing step forward in game graphics, it is another checkbox to fall in the “You can’t do that with raytracing” debates.

Moving on to another one of those checkboxes, we get antialiasing. With a raytraced scene, AA requires you to effectively shoot 16 rays for one pixel, not exactly what you would call efficient. This basically slows any raytraced engine with AA turned on to a crawl, and they don’t have gobs of spare frames to give up right now. As usual, clever optimizations schemes save the day. 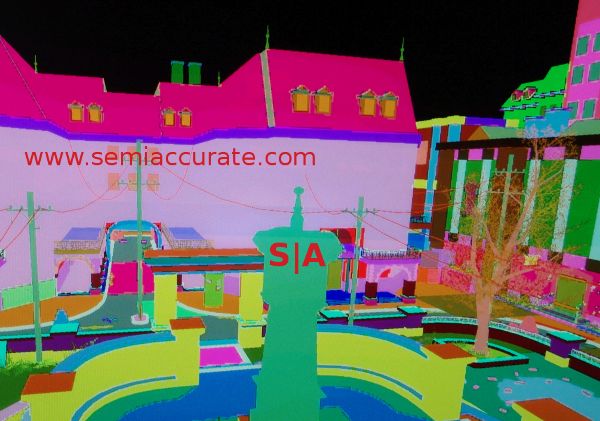 As you can see above, that clever scheme is called surface coloring, and it, err, colors surfaces. The idea is to take every game surface, as identified by the engine, and give it a mesh ID. The picture above basically false colors it for people like you and I that can’t read mesh IDs by the billion in real time. This qualifies you as a luddite in raytracing circles, so for your own safety, don’t go pointing that out in the bars near SIGGraph.

The mesh IDs use surface normals per pixel to figure out where edges are, and then selectively AA those. This still means shooting 16 rays per shown pixel, but it cuts down on the number of pixels needed by orders of magnitude. Even then, not all edges are selected, if an edge isn’t sharp enough, using AA is still a waste. That said, it works, and is quite playable on the rig Intel was showing at IDF. 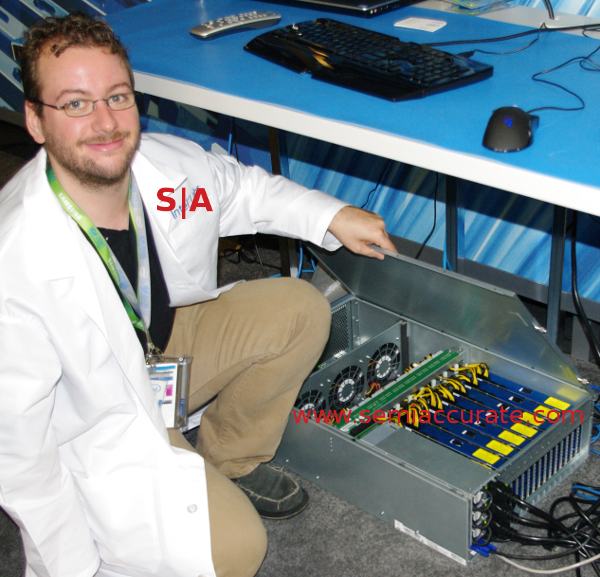 You would smile too if you had this to game on

About that rig…… Yes, it is an 8x Larrabee, err Knights Corner box. It will be a while before you see this in a thin and light laptop case, much less an Ultrabook. Lets just say that this is a rig designed for research, and it is doing just that. A year ago, you couldn’t really do real time AA, HDR effects, and several other things in a real-time raytraced engine. As of this last IDF, you can, and soon it will be doable with only four Larrabees. Progress marches on.S|A