Gigabyte hints at its X79 G1.Assassin 2

Can Gigabyte’s Assassin Find its Way into Gamer’s PCs?

Gigabyte’s getting ready to make an addition to their G1-Killer line of motherboards in support of Intel’s X79 launch next month. The company released a few new shots of its X79 G1.Assassin 2 offering. This offering builds on G1-Killer brand that Gigabyte introduced at the beginning of the year with the X58 G1.Assassin. This particular motherboard, like its predecessor, is aimed at a rather small niche of the market as it absolutely caters to high-end PC gamers. What Gigabyte is trying to do here is build its G1-Killer brand into the go-to motherboard for this group. Admittedly, it’s not surprising that this is the case, but what is entertaining is the way in which Gigabyte’s trying to differentiate its G1-Killer motherboards from the more mainstream motherboards they offer like the UD7 series. 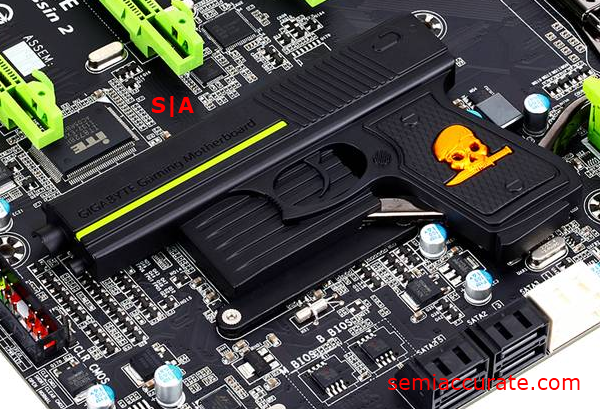 Chips like Killer’s E2100 NIC , and Creative’s X-Fi are included on the board to entice gamers with high quality audio and the best pings possible. In addition to these specialty chips Gigabyte has even shielded certain components with a metal riser to protect them from damage.

But what really separates the G1. Assassin 2 from its competitors is its distinctive color scheme and heat sink styling. Neon green and pitch black are certainly colors that make this board stand out from the rest of the pack, but the heat-sink design that Gigabyte has on this board are even more creative.

As a marketing tool, making your heat-sinks look like the guns that you’ll find in most first person shooters and action games is really quite a good idea. Despite this Gigabyte has received a fair bit of criticism about the style of these heat-sinks with the most common claim being that they appear tacky or campy.  Let us know what you think of Gigabyte’s G1.Assassin 2 in the comments section.S|A