NXP has USB video chips too

At TFE/Fusion 2011, the usual list of component makers were out in force, and the first one to catch our eye was NXP. They were showing off USB GPUs, docks, dongles and switches. 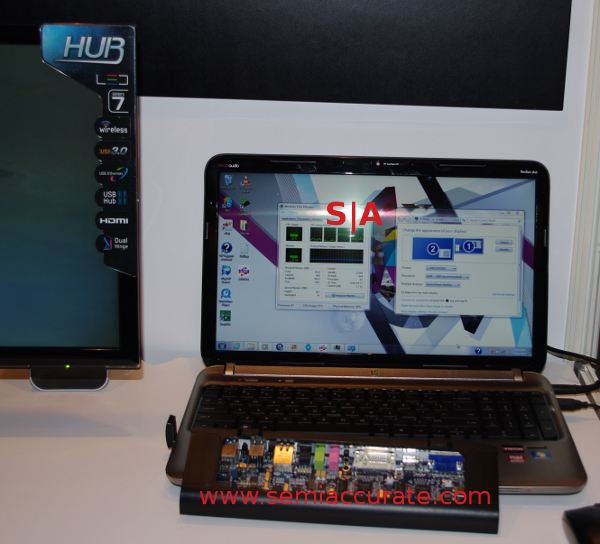 One monitor, not two

You might remember DisplayLink and their USB 3.0 display chip from IDF. At TFE, NXP had a similar solution aimed a bit lower in the market. Instead of a fire-breathing dual 1080p monitor plus other goodies, the NXP chips were aimed at a lower point on the price and function curves. The docking station above could only do a single display out, plus a few other ports, but that is exactly what it is supposed to do. The upshot is that NXP had a ton of different reference designs to show this and other chips off.

Going from port to port

As you can see, there are USB -> VGA, DP, HDMI, and others, as well as video standard -> other video standard converters. These aren’t exactly uncommon anymore, but NXP has the most complete set of silicon we have seen so far. At TFE, they had over a dozen different variants.

The versions shown off were not high end, it was pretty obvious that they were aiming for inexpensive but solid devices, and were not claiming anything else. The USB -> HDMI dongle they were demonstrating was running a 1080p movie at full frame rate over a USB2 connection. There was obvious compression, but you had to look for it. That said, it ran smoothly and never stuttered, but if you did look carefully, you could see minor artifacting. Luckily though, they are promising USB3 variants in the near future that will not have this problem, and hopefully do it at a low cost.

Last up, NXP was showing off a bunch of high speed switch chips, the CBTL02043 10Gb redriver and CBTW28DD14 14-bit switch. The redriver is just that, and the switch is basically a multiplexer for DDRx memories. Again, not scintillating stuff to show off, but just try building a PC without these components. Don’t ever overlook solid but totally unsexy support chips.S|A