There’s been a flurry of activity lately in the video-over-wireless space.  First, Intel released its WiDi technology, a simple bit of software that streamed video from a Nehalem or Sandy Bridge laptop to special adapters you can hook up to your TV via composite or HDMI.  The first generation was awful, with range approaching a massive 12 feet, resolution limited to 720p, lots of reports of dropouts, >500ms pings, and no support for HDCP.

The WiDi refresh in May was a lot better, supporting 1080p and HDCP, but you had to buy a new receiver for 1080p.  Still the range hasn’t improved, as can be seen in Netgear’s literature.  15 feet isn’t a lot of range, and moves this product purely into the niche range, for those who are too lazy to plug their laptops into their $3 HDMI cables. 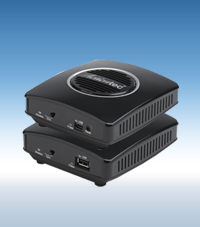 Enter ActionTec’s “MyWirelessTV”, a product with a truly inspired name that claims to do the impossible.  MyWirelessTV is a pair of wirelessly-connected black boxes that connect your TV to your laptop or desktop.  One encodes video, sends it over 5Ghz Wifi, and the other decodes it.  Add pass-through USB and IR and you have a pretty solid setup.  Unfortunately, ActionTec’s literature makes a number of completely impossible claims that diminish their credibility dramatically.  The first sentence alone is enough to send even the least-educated geek off a cliff.  Actiontec claims (emphasis added): “[t]he new wireless solution delivers a 1080p60 3D signal up to 150ft away, with practically no latency, even through walls and floors.”

Excuse me while I think up a good fecal analogy.

As anyone who has every tried to stream 1080p video knows, decently compressed H.264 video requires a bitrate of around 25 Mb/s.  Of course, you can go lower, but at that point you’re not really delivering true 1080p quality, you’re introducing some visible compression artifacts.  And 1080p in 3D requires double the bitrate, so 50 Mb/s.

5Ghz Wifi is a great thing, or so we thought when it first arrived.  But as experience has shown, reaching anywhere near the reported 300 Mb/s peak of 802.11 is nearly impossible, even with line of sight in a tiny living room.  And penetration through walls and floors is much worse than 2.4Ghz – so bad, in fact, that my home setup rarely exceeds a maximum of 27 Mb/s, even though they are separated by a single floor and about 10ft of absolute distance.  There are multiple reasons for this: the average 5Ghz client device has woeful power ratings, nearly half or worse than current 2.4Ghz devices, and the 5Ghz carrier frequency can barely penetrate anything solid.  So excuse my skepticism when ActionTec is claiming that they have managed to bend the universe to deliver 50Mb/s of uninterrupted throughput up to 150 feet away, through walls, floors, your parents having sex, and your collection of ALF memorabilia.

It is too bad that such a wild claim should mar a product that really is, at the heart of it, a great idea if properly executed.  $229 for a wireless KVM is not that bad, if it works.  I would love to be able to control my PC from the other end of the house, wirelessly and without noticeable latency.  But when the company makes asinine comments like “Considering a 100 ft. HDMI cable can cost upwards of $300, MyWirelessTV isn’t just easier…”, while advertising a product that most certainly cannot provide reliability at anything even close to 100ft, why should we be willing to give them the benefit of the doubt?S|A