And shoot off their remaining foot in the process

AMD (NYSE:AMD) does it again, they put out a good product, shoot themselves in the foot with messaging it, and manage to leave a bad taste in everyones mouth. Welcome a new crop of Llano CPUs, and quite possibly the greasiest naming convention since Intel’s iSomethingmeaningless and Nvidia’s G8x infinite renames.

Lets start out with the good. There are what looks like seven new notebook Llanos, and five new desktop versions launching today. I say “what looks like” for a reason, but more on that after the raw numbers.

OK, AMD seems to have taken Llano/Ax and slightly bumped the speed by about 100MHz along with a few other minor changes. This means higher bins, more availability, and other goodness, so what is the problem? Where to begin, that question sadly leads to a target rich environment.

First of all, there is the name, specifically on the A8-3870K and the A6-3670K. They are fast, don’t have the damnable turbo stuff, are unlocked, and are faster than you could get before. This isn’t good? No, it is, and normally we would write that if it wasn’t for two big problems. First is that damn stupid name. Yes, AMD blatantly and unapologetically copied Intel’s naming scheme. Really? Come on guys…….

Yes, Intel screws customers and enthusiasts by taking specs away for no reason other than to weasel more money out of them by selling it back, we know that. AMD looks to have copied that too, but they didn’t have to copy the name so directly. They have a decent product, and can finally make it in a semblance of volume, so must the company snatch defeat from the jaws of victory with a moronic choice of names that recalls user abusive practices by their competitor? I guess so. Well done, simply fscking brilliant! Now it is hard to write about the chips in a good way.

But it gets better. We say that there may be differences because we can’t really view the presentation, it is in a proprietary format (.pptx) that we can’t open. Actually, we can open it, but the result is so mangled that, well, we are more guessing as to what it says than we like. There was an older version we received, and that looks to have much the same info, but, well, who knows? 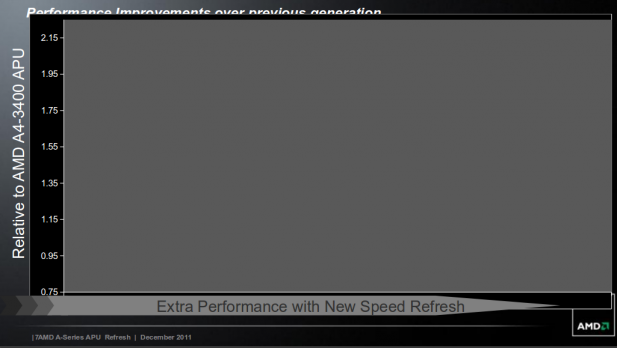 On the up side, that older one was mercifully short, completely lacking the bar graphs and shiny infographics that clearly show the results of a 100MHz or so boost in clock will get you. Or it probably would if it weren’t so mangled, stretched, and overlayed with blank squares. On the up side, it is a few less marketing slides we have to suffer through. That said, use your imagination as to what 100MHz added to a 2.9GHz CPU will do, and you won’t be far off. We think. Does it really matter? That damn K thing is still stupid.

In the end, AMD had good products, but they forever tainted them with stupid, pointless, destructive marketing. Again. There may be 12 new CPUs, but there might be a lot we missed. There might be pricing on them, but that wasn’t in any of the materials provided, nor was there any info about a possible stepping change or any other changes. It may be there in the mangled slides or it may not be, so apologies to the readers if we missed anything or got details wrong. Unfortunately, we didn’t miss that K name. Own goal once again AMD.S|A