Orange announes an Intel based phone

Updated 2x: Just for your reference design, with added sticker

Orange is bringing California to Europe with the release of Santa Clara, the internal code name for their Atom based phone. While not wanting to point this out, the code name is about as subtle as a baseball bat to the head.

The short story about this part is that it appears to be a mildly tweaked Intel reference design, but not the one that Intel was showing off at CES. The phone itself is very likely a newer rev of the older part, it has the same look and specs, but is smaller by a hair here and there. It also may have a few of the rather conservative reference design numbers raised a bit here and there. It looks like this. 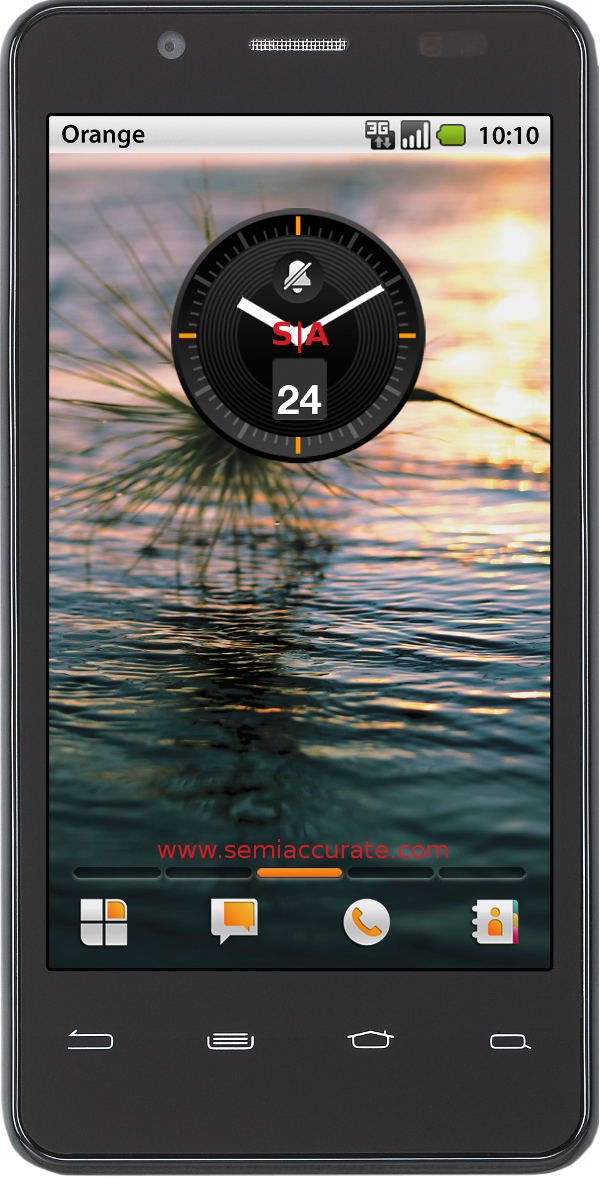 One visible detail change from the last version

The limited specs given in the press release say that Santa Clara has a 4.03″ screen, 16Gb of memory, and weighs 117g. The dimensions are 123 * 63 * 9.99mm, interesting number that last one. Call me overly skeptical, but two of these numbers would prevent me from buying an Orange phone ever again. No, it has nothing to do with the device itself, that is fine, it is the marketing behind it that would have me scurrying for another brand faster than you can say “T-Mobile ethics“.

OK, maybe it isn’t that bad, but it is a big reddish-Orange warning flag to potential customers. What am I babbling about? The company’s seeming penchant for using numbers to mislead customers. Please note the 16Gb of memory, it sounds really big, right? Well, in a NeoGeo-esqe fashion, instead of saying that the phone has 2GB of memory, they are using non-standard nomenclature to sound bigger. The same for the depth of the phone, 9.99mm? Really? Do you really think they will sway hesitant customers with .01mm, or just look stupid while trying.

Any company willing to sell a high end product that doesn’t need to be sleazed to interest the techno-geeks, but does anyway, should be treated with caution. Instead of making you wonder how good the bundled extra value services that the press release touts, it make you wonder how much money will end up on your bill ‘accidentally’ if you hit an icon by unintentionally. As is the current fashion, removal probably isn’t an option either.

Back to the good stuff. The phone itself comes with Android Gingerbread, but there is an Ice Cream Sandwich upgrade planned. Since Santa Clara is pretty much an Intel reference platform, and the author has used Ice Cream Sandwich on an earlier version over two months ago, this seems like a good bet to happen sooner rather than later.

Intel is desperate to force their way in to the minds of phone buyers, and they finally have a product to do so with. Lenovo, Motorola, and now Orange on board, with others likely to come over the next few days at MWC. Orange is also making no bones about its plan to up the number of ‘own brand’ phones it sells too, so it is a safe bet that both sides will bend over backwards to make this device hiccup free. Not a bad start, you could say 99.9% there.S|A

Update Feb 26, 10:30pm: A lot of people are saying the phone has 16GB of ‘memory’. As you can see from a screenshot of the press release below, it does say Gb, specifically not GB. While this could be a typo/autocorrect problem, emails asking for confirmation of both this and the 9.99mm number before publication have not been returned. We did ask first.

There is no release on either the Orange or Intel site that can confirm either possibility, but Anand is saying it is 16GB although we have no idea where he got it from.

Update Feb 26, 11:59.99pm: We got a response back to one of the earlier emails. The Gb vs GB part is very likely a typo, so the phone probably has 16GB of flash, not 2GB or DRAM. Please ignore the ranty bits above.