Filled in the gaps days before the competition start out

Reviews are always made quicker and easier by the utter lack of driver to run the product, so the AMD HD7800 series was a snap. With the launch of the HD7870 and HD7850, we have two more new cards we can’t run yet, cool though they are.

Yes, you heard that right, AMD utterly failed to deliver any kind of working drivers for the cards they sent SemiAccurate, so we can tell you the specs, how nice they look, and where they line up, but that’s about it. Considering that the company can’t even put out functional Linux driver for the HD7750 released weeks ago, this isn’t as much of a surprise as you might expect. While AMD’s driver delivery of late has gotten somewhat absurd, it is nowhere near Intel’s record of multiple products launched that never receive a working driver for their entire life. There is still time to change however. 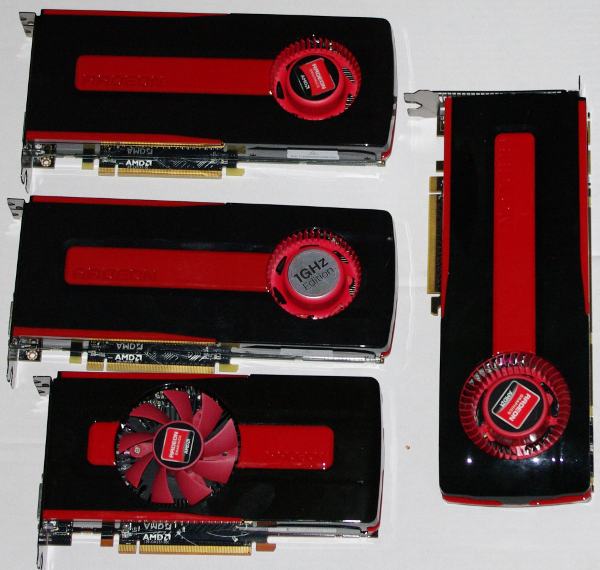 OK, enough with the sad state of software, lets do what we can to tell you about hardware, and it does look pretty good. If you are thinking that the new Pitcarin based duo, the HD7870 and HD7850, are right in between the HD7900 and HD7700, you are exactly right. They split the difference almost perfectly between the smaller Cape Verde and larger Tahiti. You can see that from the specs below, and there are only a few things out of the ordinary. 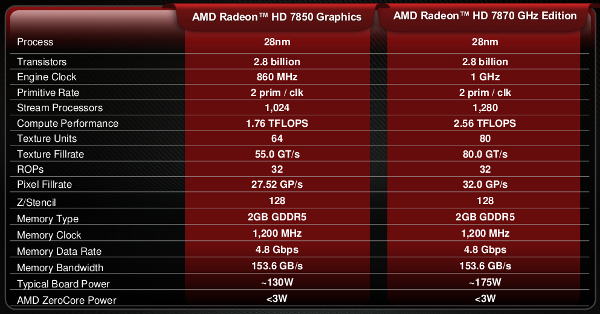 The specs in one table 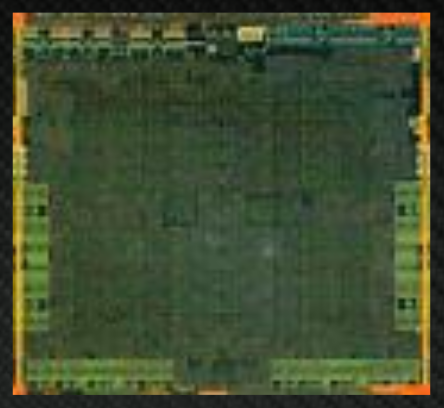 The die as best we have

One thing you may notice is that Pitcairn is about what you would expect, a bit less than 2x Cape Verde in size, units, and transistor density. Tahiti is the outlier, it is way more than 3x Cape Verde in size, and more than 32/10 times as large. GCN has a fixed ratio of four Texture Units (TUs) per Compute Unit (CU), so the count there is what you would expect. Luckily though, the rest of the uncore, dual front ends and Geometry Engines, Render Back Ends, and the like are equal to Tahiti.

This leads to a bunch of questions as to why. The initial thought many have, DP FP rate, is not the case because it takes almost no transistors to tie two SP units into a single DP. That said, Pitcairn will do DP at 1/16th the SP rate as compared to Tahiti’s 1/2 rate, 1/4 in consumer cards. This means the extra die area in Tahiti is likely to be ‘plumbing’, basically making compute faster in non-obvious ways like user-invisible caches. You won’t see the difference in spec sheets, but for some things, you sure will feel it. 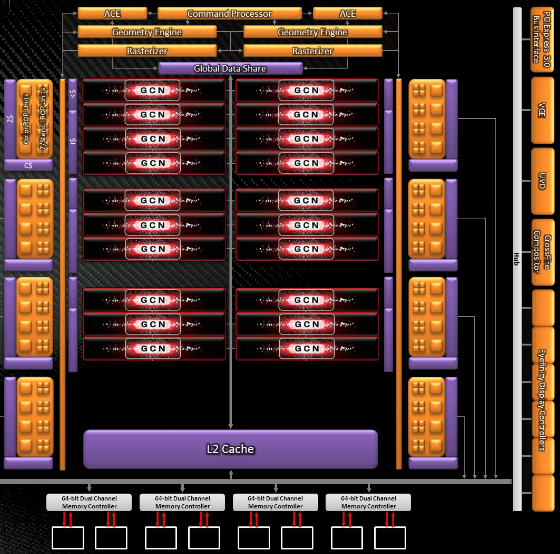 This layout should look familiar

Since Pitcairn clocks higher than Tahiti, 1GHz vs 925MHz, the disproportionate uncore resources should back up AMD’s claim of better geometry performance than Tahiti. Since this is rarely a bottleneck in anything but artificially created pathological scenarios, don’t expect Pitcairn to beat Tahiti at anything in the real world. It is a nice data point, but not really anything to base a purchase decision on.

On the software side, AMD is promising an upgrade to the MLAA they introduced with the 6800 line last year. Better still there is a new Anti-Aliasing mode called Sparse Grid Supersample AA which brings automatic LOD adjustment. Since this is for Windows only, we find it very hard to care, especially in light of the current driver woes, Windows or Linux. That said, all of these new features, and possibly the VCE video encode drivers, are coming in Catalyst 12.3 Beta, 12.4 if you need WHQL certification. Yay?

The HD7870 is priced at $349 and the HD7850 at $249, right on top of Nvidia’s GTX570 and GTX560Ti respectively. Both AMD cards come with 2GB of memory, and should comfortably punt their rivals in to the weeds, matching or exceeding the much higher priced cards. One card that offers a better price/performance ratio though is the AMD 6900 line (Check prices), but since those are conveniently EOL’d and supplies are running very short, unless you are a buyer, this problem is ‘solved’.

AMD is quick to point out that these cards are more than powerful enough to game at 2560 * 1600 with a lot of eye candy turned on, 1920 * 1200 with all the bells and whistles. For this, 2GB of GDDR5 is more than a good idea, it is a necessity. Multi-monitors at 1080p or more may make it stumble, a single monitor isn’t going to be much of a threat. If nothing else, these cards will kill off the <2GB category for $200 and up cards.

Pitcairn looks to be the gaming card of choice this round, performance and power without the power use. The price is high pretty high for a mid-range part, but with the 6900 line EOL’d, it is better than anything else for the money. If you can get one that is, word from the Orient is supplies are going to be really tight for a while. If you don’t mind overclocking a bit, something the whole 7000 line seems to do very well, the HD7850 looks to be the price/performance winner for both the Pitcairn pair and the entire HD7000 line.

While the Pitcairn duo, HD7870 and HD7850, are ‘launched’ today, don’t expect to actually buy one for about two weeks. It seems like a shame to close on a down note, but once again, AMD is paper launching cards. The on sale date for both will be March 19, two weeks from the embargo lift. Officially this is to preempt leaks at CeBIT and GDC, a fairly worthy reason, but given the last two stumbles, it isn’t a wise move. Short story, good silicon when you can get it.S|A