Common Platform 2012: Upwards for both mood and costs

Of the three keynotes at the recent Common Platform conference, Global Foundries was tasked with discussing the business side of things. The mood was upbeat as well, a sign of the recently renewed interest in the company’s offerings.

The idea is roughly the same as last Common Platform, costs are going up, and companies that can afford to make bleeding edge chips are becoming fewer and fewer. On the fab side, those costs need to be shared, and that is why Common Platform brought IBM, Samsung, and GloFo together. Chip design complexity is going up as well, so fewer and fewer tapeouts are happening for any given process. Unfortunately, fewer projects means less customers for each tool vendor, so the price of doing anything on the smallest nodes are spiralling up for customers as well.

This problem is nothing new, we all know it is happening, and all know why. Most people analyzing the problem also see the main effect, a general consolidation of players, as inevitable, but views on it’s effects are varied. Some think it is good, some think it is bad, but no one thinks it won’t happen. The most interesting bit isn’t the overarching idea, but the actual numbers. 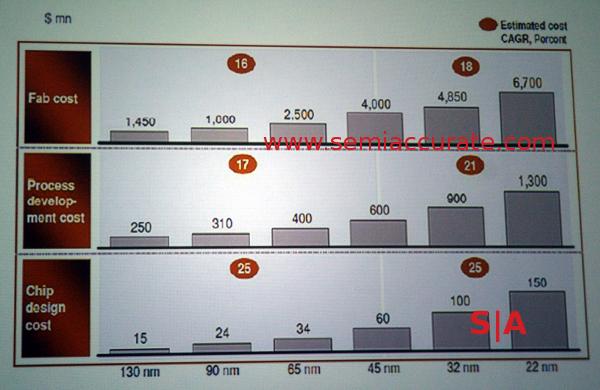 As you can see from this Global Foundries slide, the price for doing anything in the semiconductor world are spiralling up. From the 130nm node to the impending 22nm node, the cost of building a fab has gone up mode than four times. Since a fab back in the ‘good old days’ cost almost $1.5 billion, it has gotten rather spendy in very short order.

This number may be much larger than that of developing a process, but development costs are growing at a much more rapid pace. On the same nodes listed above, development costs went from $250 Million to $1.3 Billion, more than a five-fold increase. One thing to note here is that 22nm is still a planar process, 14nm FinFETs are a major change and won’t be any cheaper. No slowdown in the development ramp is in the cards either, so costs will explode here too.

Unfortunately for the poor old consumer, that would be fabless semi companies, the numbers show up in their books too. Costs for taping out an average chip on each successive node have gone up by a much more sobering and painful number, 10x. Fortunately, that number was pretty small to begin with, $15 Million, but the $150 Million it stands at now is not exactly chump change. Needless to say, this pain has quite a sobering effect on who tapes things out. 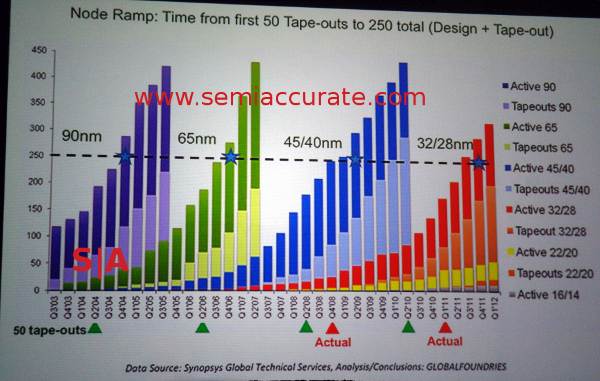 The chart above shows the slowing trend of tapeouts on each successive node, with the green pyramid connoting the time when the 50th tapeout on each successive process occurred. 90nm and 65nm were about as expected, they hit the normal two year cadence that is synonymous with Moore’s law. At 45/40nm, something odd happened, the 50th tapeout occurred two quarters later than anticipated. Worse yet, 32/28nm was four quarters behind expectations, and the signs are 22/20nm will be slower still.

Why? Money. What can be done about it? Not much, fixed costs have to be shared, and that means each wafer will cost more, and the pretty artwork stencilled on them will have to sell in higher volumes to pay for it. We are quickly moving from a world of original artwork to signed lithographs with steadily increasing run counts. Fixed costs are being spread where they can be, but that isn’t even slowing the increase, much less stopping it.

Is there a silver lining here? Not really, but one bit of happy news is the lower right hand side of the graph, active and taped out 22/20nm and 16/14nm projects. Note when they start, and when the tapeouts happened, that is a lot earlier than most people suspect. It is also a lot more numerous than many of the pundits believe. While it isn’t a silver lining, it is better than it could be.

This is one reason why Global Foundries was upbeat. The other is that their much heralded missteps and management changes appear to be settling down and a semblance of normalcy is setting in. Customers do not place bets costing hundreds of millions on teams that can’t deliver, for that money, you need to be reasonably sure what you will get in return. This was biting Global Foundries in the sales region for most of 2011, and they were not the proverbially happy bunny suited bunch.

As mentioned earlier, this year at Common Platform, things took a rather radical turn for the better. The whisper numbers on the floor were that orders for 28nm wafers had picked up dramatically from several different sources, and not small orders either. Last September at GTC, the exact opposite was true, cancellations, executive shuffles, and a general malaise was the order of the day. What was shaping up to be a lean 2012 is looking to be, well, fairly busy if not booked out.

What changed? It is hard to tell, but TSMC’s recent missteps have obviously not helped their cause much, nor has 28nm wafer shortage. While it is not provably tied to anything TSMC has done, we have heard Qualcomm is suddenly much more keen on GloFo’s 28nm process than they were a few months ago. How keen? SemiAccurate’s sources are saying that you should not be shocked if the majority of their chips are made at GloFo by late 2012.

Qualcomm’s story is far from unique in the industry, there are several more companies voicing similar sentiment. Chipmakers that were quite cool when asked about GloFo last year are suddenly much more complementary, but none put their finger on any specific item. Given the risks involved, you can assume the appropriate homework was done prior to signing a nine digit order, something we take as a stamp of approval for GloFo’s HKMG 28nm process.

In the end, costs keep going up, customers are fewer but more valuable, and keeping them happy is paramount. None of the fundamentals Global Foundries has been talking about for the last year have changed, but the Common Platform is looking more and more cohesive, and executives are smiling much more than in 2011. It may not be time to celebrate, but cautious optimism from all parties seems to be in order.S|A