Improved is an understatement

You might remember our review of the GeChic 1301 “On-Lap” monitor from about three months ago. Since then, GeChic says they have been working tirelessly to produce an improved product. We concluded from the 1301 that while the idea was solid, there were a number of serious implementation issues that prevented us from recommending its use.

With the release of the 1302, I’m pleased to say that GeChic has done something that is too rare in this business: they have listened to user feedback and created an improved product based on that feedback, in just under 3 months.

As a programmer, screen space is absolutely essential to me. Laptops have been progressing slowly backwards in this regard: mainstream laptops that used to have 1600×1200 screens moved down to 1440×900 and eventually 1366×768. These days, you need to buy a high-end laptop to get a decent screen, and most people don’t need high-end laptops, they just want enough screen space to multitask comfortably.

The GeChic 1302 fills this void, providing laptop users with another million pixels of screen space for a relatively low price. You can choose to mount the screen directly onto the back of your laptop so you can just fold it out. This is the  most convenient usage and thankfully is much improved on the 1302. If mounting isn’t your thing, the 1302 can be used with included “stand bricks” in both portrait and landscape mode. 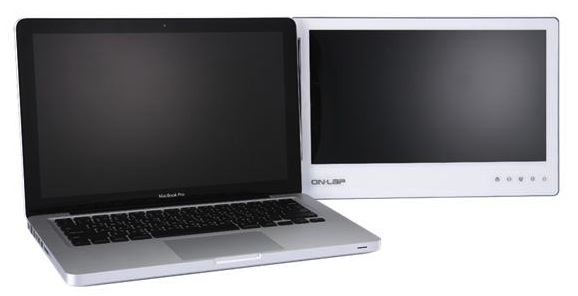 You may notice that the look has changed significantly. Gone is the clumsy cage and awful plastic wire-guide. Gone are the suction cups and cupule mylars. Gone are the fake touch-sensitive buttons below the screen, replaced with real touch-sensitive button. And most significantly, gone is asurprising amount of weight – the 1302 is nearly a pound lighter than its older brother.

The 1301 attached to your laptop via a unwieldy suction cup system and added significant thickness to the product. Many smaller or older laptops had trouble supporting the 1301. Removing it was also quite a pain, as the suction cups were perhaps a bit too good – a slip of the finger and it would reattach itself quite securely to your laptop.

The 1302 goes with an entirely different approach. Instead of a large plastic cage, we now have a simple detachable hinge. Unfortunately, it must be attached to your laptop via adhesive – a deal breaker for some, especially Mac users and those with flashy laptops. But if you’re okay with it, you simply attach a small metal slider to the back of the right side of your laptop lid. Once it is on there, simply fold out the hinge from the 1302 and slide it on. It’s quite a bit quicker and swifter than the 1301, and it works on laptops with smaller screen sizes than the 1302 itself, a glaring oversight in the 1301.

Thankfully, the hinge is much improved from the 1301 as well. The 1301’s hinge provided no resistance – if your screen was tilted at an angle, the hinge would simply swing backwards. This was awful for usability – you could essentially only use the 1301 if your laptop was opened at a strict 90˚ angle. I am happy to report that the new hinge is very stiff and sturdy – it will stay put in whichever configuration you decide to put it in. Combined with the much lower weight of the 1302, each laptop I attempted attachment with held steady. Keep in mind that some netbook hinges are flimsy – your mileage may vary.

While this attachment mechanism is cool, many users may not be comfortable with sticking adhesive to their laptop lids. For the rest of us, there is a workable, yet clumsy workflow. The 1302, like the 1301, comes with “stand bricks”, these smelly rubbery green bricks that hold up the 1302 in portrait or landscape mode. Thankfully, unlike the 1301, the stand bricks actually fit the 1302 and there are even instructions included on how to use them. They feel lazy, though – they are notched on both sides, one wider than the other, but the wide side doesn’t fit the 1302 and is unusable. I would really like to see some sort of built-in mechanism for propping up the monitor here; there is already a built-in hinge, it would not be far off to expect an EVO 4G-style kickstand or something of the like.

Thankfully, once you get this thing running, it’s quite nice. The cable management is much improved – instead of running cables through a flimsy cable channel, a plug not unlike an iPod dock cable plugs directly into the corner of the monitor. Attached are either a USB and HDMI cable, or USB and VGA. They have been extended from the cables in the 1301 and now fit laptops with unfortunate port placement – some laptops required the use of a USB extension to use the 1301.

The panel appears to be mostly the same as the panel in the 1301. Resolution is still 1366×768, colors are fine and brightness is quite good, but it is a glossy display and colors shift quite visibly at angles. You get what you pay for: a 13″ monitor that runs on 5W and weighs just over a pound for $199 – don’t expect IPS here.

Overall, the 1302 is a solid product for road warriors and laptop programmers or designers who need the extra room for their applications. Mounting could still be simpler and the stand bricks are downright awful, but it is much improved over the 1301 and a very solid sophomore effort. I have been using the 1302 for the past few weeks and have found it to be quite convenient for running multiple applications. And while on the move, the weight is negligible; in a standard laptop bag or backpack, it is barely noticeable.

Editor’s note: We included a link to purchase here, unusual for us, as sometimes niche products are not available from the usual suspects.  In this case, they are and so no one needs to write the editor asking where to find it this time around.