Comparing the Ends of the Spectrum

Intel sent us two chips for review in the lead up to its Ivy Bridge launch. The first was the Core i7-3770K, and the second was the Core-i5 2500. The Ivy Bridge based 3770K included Intel’s HD 4000 embedded graphics chip, the Sandy Bridge based 2500 used Intel’s HD 2000 embedded graphics chip. For the foreseeable future a mix of Sandy Bridge and Ivy Bridge based SKUs will be available to consumers, thus we thought it would interesting to compare the top of Intel’s current graphics performance stack to the bottom of that same stack.

As we just alluded to this means putting the quickly aging HD 2000 in the ring with the newly arrived HD 4000 and trying to judge the extent of the gap between the two. If you’re wondering where Intel’s old graphics champion fits into this comparison, remember that Intel is billing the HD 4000 to be about twice as fast as the HD 3000, so cutting the HD 4000’s frame rates in half wouldn’t be a terribly inaccurate way to estimate the performance of the HD 3000. Or you could look at the plethora of reviews from this time last year.

Much like our review of the HD 4000 our goal in this article was to get our resolution as close to 1080P and then dial up the graphics quality from there. But, as you’ll soon find out coaxing playable frame rates out for the HD 2000 at 1080P was a feat in and of itself. It should also be noted that were were running the latest available drivers for the HD 2000 from Intel’s website, and not the drivers that Intel provided for our review of the HD 4000.

Our first game is Counter-Strike: Source. This game had a few notable problems when we tested it on the HD 4000, including a pop up window from Steam informing us that it’s database did not recognize our graphics adapter and text corruption when anti-aliasing was applied. These problems are also present when running the game on the HD 2000. But the text corruption issue is a moot point now because not only does the HD 2000 not support 8x MSAA (it only supports 4x MSAA) in Counter-Strike: Source like the HD 4000 did, it’s also not quite fast enough to run Counter-Strike with any anti-aliasing at all.

As you can see from the results below our in-game benchmark run, at a resolution of 1080P, yielded only 25 frames per second. Unfortunately for the HD 2000, unlike many of the other games we’ve tested with, Counter-Strike: Source quickly becomes unplayable as frame rates drop below thirty frames per second. Additionally, playing on a server with 32 bots yielded frame rates in the mid-teens and thus is not what I would call playable. Even at 2x MSAA the game still wasn’t quite playable, so we ended up disabling anti-aliasing all together. The in-game benchmark noted an almost doubling of frame rates from our prior settings. 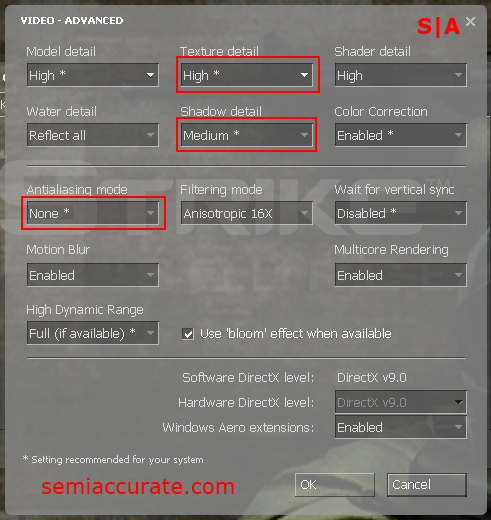 Looking specifically at our graphics settings you can see that Counter-Strike has capped some of the graphical quality options at less than their highest settings. It also rates the HD 2000 as a DirectX 9.0 graphics card, where as the HD 4000 is rated as a DirectX 9.0+ adapter. With all of this information in mind it should be unsurprising to hear that the HD 4000 provides a better experience in this game than the much less powerful HD 2000. 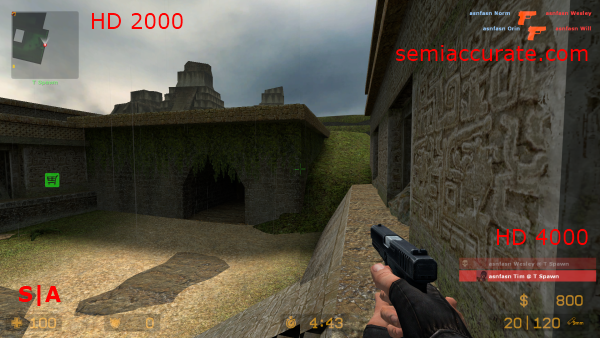 Despite using lower quality settings than the HD 4000, the HD 2000 is able to produce very similar image quality in Counter-Strike. The biggest difference between the two is the use of anti-aliasing, which is less than apparent in this side-by-side due to the scaled down nature of these images. 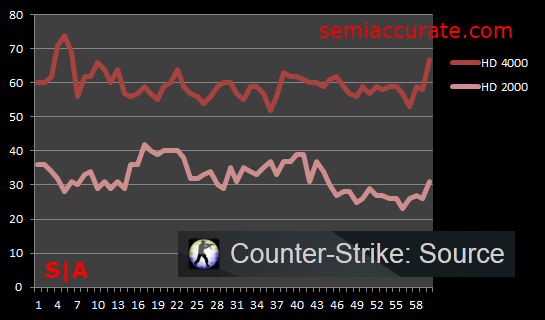 This graph shows a direct comparison between our contenders at the highest playable settings we found for the HD 2000. The HD 4000 is able to consistently deliver about double the performance of the HD 2000 in Counter-Strike: Source.

Our second game is Metro 2033. Now the HD 4000 actually provided a pretty respectable experience in this game. Unfortunately the HD 2000 does not fair as well.

I was forced to run the game in its DirectX 9 mode, drop the graphics quality to its Low pre-set, and then lower the resolution to a mere 720P. And to top it off the game only barely crossed over into playable territory at these exceedingly low settings. Actually, the only way we could have further reduced our quality settings would have been to drop our resolution to sub-HD settings. 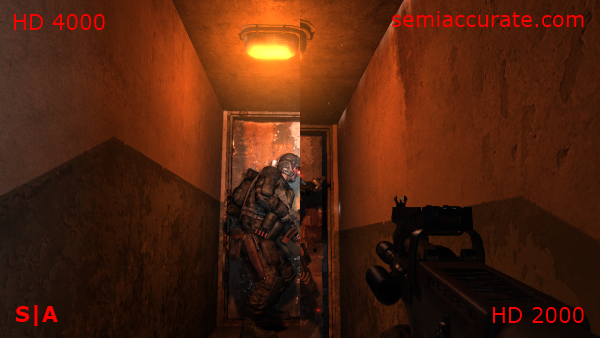 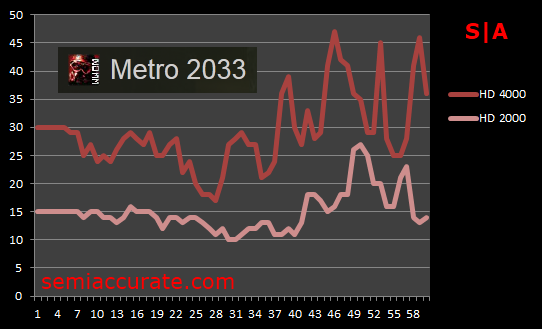 This direct match up again shows that the HD 4000 provides about double the performance of the HD 2000 at equivalent settings.

This is another game that really fared quite well on the HD 4000. Yet again though we were forced to drop the in-game quality settings down to their minimums on the HD 2000. 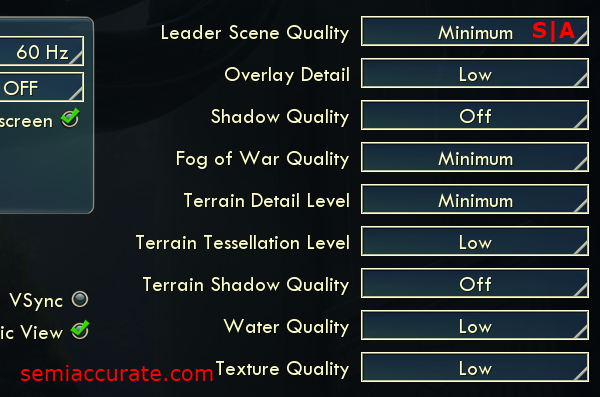 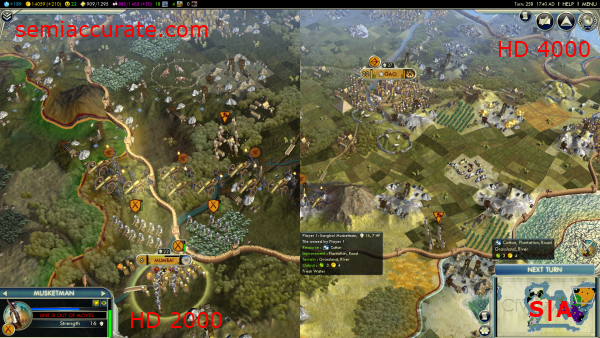 Texture quality is the biggest difference between the HD 2000 and the HD 4000 in Civ 5. Additionally the game map loses a lot of its physical attributes outside of DX 11 mode. 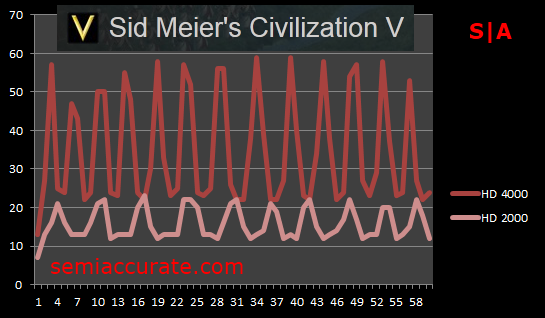 We’re seeing almost three times greater frame rates in Civ 5 with the HD 4000 than we were able to squeeze out of the HD 2000 at equivalent settings. Some of you may be wondering about the see saw pattern in frame rate in the graph above, this is due to us scrolling all the way in on the game map, the high points, and then scrolling all the way out from the game map, the low points.  You do that too when you play, no?

One of the biggest advantages of playing Portal 2 on the HD 2000 is stability. We didn’t experience any mid-game play lock-ups or crashes, like we did when we tested the HD 4000 in this game. We were not unexpectedly forced to drop the graphical quality settings to almost their lowest pre-set. Initially we left the effect detail on high, but as more portals and lasers were added into the game our frame rates dropped from the low thirties and into the low twenties, which prompted us to drop that setting to its medium pre-set. Image quality was notably lower running at these settings on the HD 2000, but we were still able to find settings that made the game reasonably playable at 1080P. 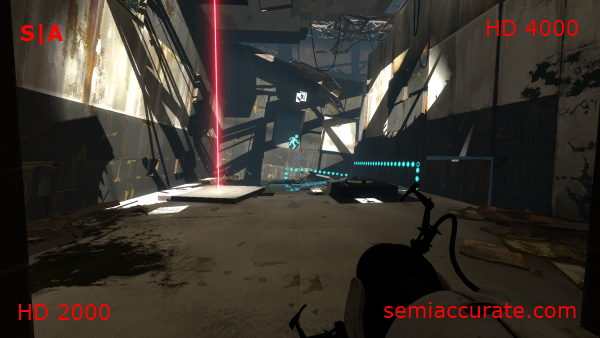 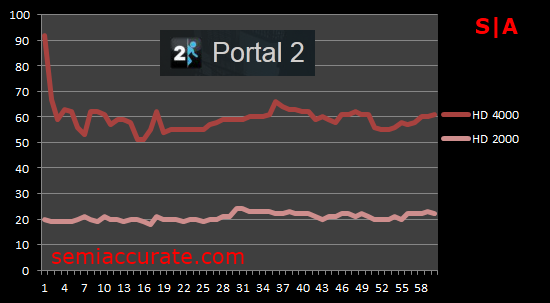 Looking purely at performance we can see that the HD 4000 yet again offers about three times the frame rates of the HD 2000 at equivalent settings.

This was another troubling benchmark for the HD 2000. Stability was good, but it’s beginning  to seem like Intel designed the HD 2000 to have just enough horse power to provide 30 frames a second at HD resolutions, if the given game is running on its “Low” graphical pre-set. 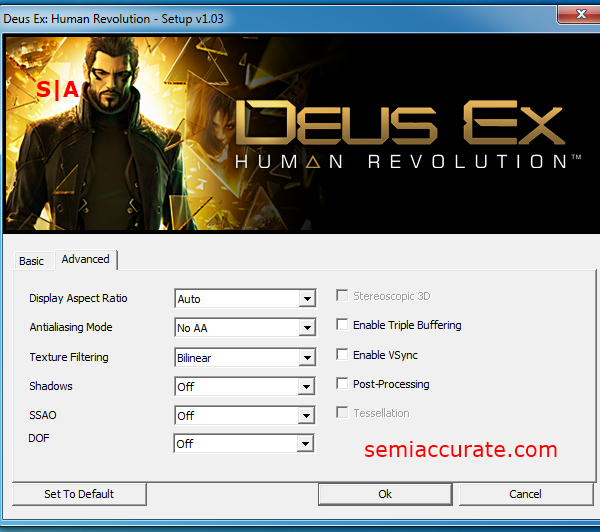 On the HD 4000 we were able to use 16x Anisotropic texture filtering, normal shadows, normal SSAO, and low FXAA, at a resolution of 1080P. The HD 2000 was only capable of running the game at about five frames per second at those settings. So I began to slowly tweak the graphical settings in this game down. I ended up turning all of the advanced features off, and setting texture filtering to its lowest quality option. I was also forced to drop the games resolution to 720P before I was getting playable frame rates without any input lag. 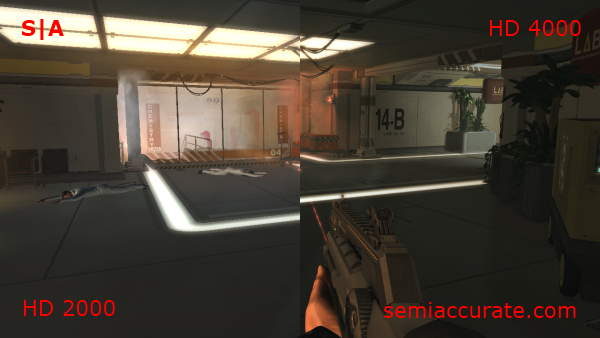 As you can see in this side by side comparison, the picture quality that we were able to achieve with the HD 4000 is significantly better than what the HD 2000 was able to offer us. 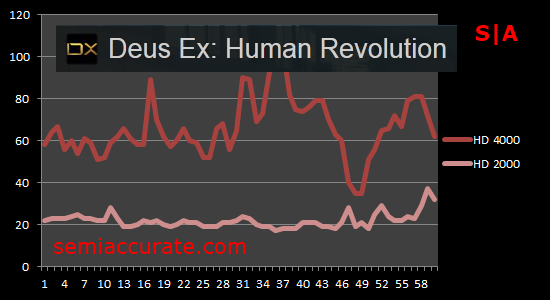 Again we’re seeing that the HD 4000 offers about three time greater performance than the HD 2000, and in some isolated cases up to five times the level of performance the HD 2000 can muster.

This game is much the same story as Deus Ex.

HD 2000 gave us frame rates in the low teens when we used the same settings we had with the HD 4000. So we once again went about dropping out quality settings down to their minimums, and then adjusting the resolution until the game was playable. I ended up using a resolution of 720P again, and putting the overall quality option to its “LOW” pre-set. Only at these settings was the HD 2000 able to provide us with playable frame rates in this game. 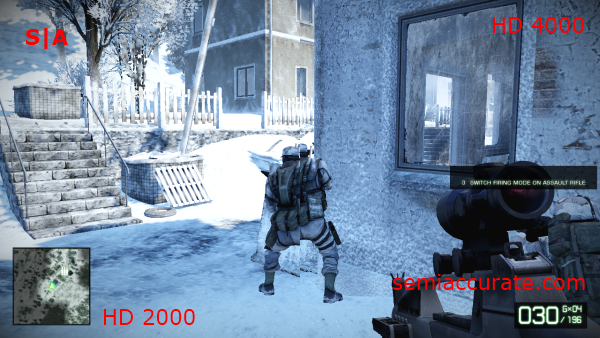 Looking at the side-by-side comparison here, we can see than there is a notable quality difference between our highest playable settings on the HD 2000, and the HD 4000. The biggest difference in quality, which you can’t actually see in these screen shots, was 2D trees that Bad Company used on the HD 2000 to cover the inaccessible hillsides of the in-game landscape. Here you can see that at equal settings we are getting approximately double the performance of the HD 2000, with the HD 4000 in this game. Can you see the pattern yet?

Let’s stop for a minute and review what Intel is promising with its lower-end Ivy Bridge GPU, the HD 2500 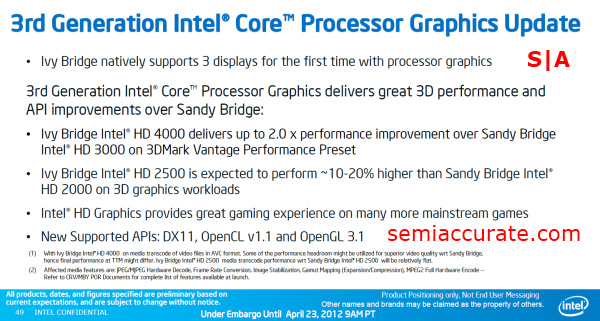 Looking back at this slide from our HD 4000 review, we can see that Intel is expecting the HD 2500 to offer 10 to 20 percent better performance than the HD 2000 we tested in this article. Now with the frame rate numbers that we got in the games we tested with the HD 2000, that small increase does not look like it will have a very tangible impact considering the low level of performance the HD 2000 offers in the first place. Let’s give Intel the benefit of the doubt here and assume that the average performance increase ends up being 15 percent.

After reviewing our findings in this article it seems the only games where that 15 percent performance bump would allow us the increase some settings would be in Counter-Strike: Source, where at least 2x MSAA would be attainable, and Portal 2, where we could enable the “High” effect detail settings, which was just barely unplayable by my standards. Looking at Metro 2033, Deus Ex, Civ 5, and Bad Company that 15 percent increase in performance would be best put to use as an increased frame rate rather than increased quality settings.

Most of the games we tested on the HD 2000 operate, despite being completely playable, in the sub 30 frames per second range. So we can reasonably assume that the biggest improvements that the HD 2500 will have to offer over the HD 2000 is the inclusion of the DirectX 11 and OpenCL 1.1 feature sets, and not its small accompanying bump in performance. But then again those two items alone should make you wary of picking the HD 2000 over the HD 2500.

The big trend that we are seeing here is that while the HD 4000 enabled us to play games at 1080P with Medium to high quality settings and 16x Anisotropic filtering, the HD 2000 has a hard time producing enough frames to keep games playable at 1080P and often needs to drop down to 720P before it starts producing playable frame rates.

As I noted earlier, it seems as though Intel designed the HD 2000 to just barely enable HD gaming on its desktop platforms. And while you might be able to mistake its performance and visual quality of the HD 4000 for a contemporary discrete graphics card, you would have to have to be near legally blind to mistake games running on the HD 2000 for a discrete solution.