If you have ever done any serious coding, you have likely run in to Slickedit, probably the most complete code editor out there. The big news at GDC was that Slickedit now has a native Mac version.

To call Slickedit a simple code editor does not do it justice, the features list is immense. Last time I was coding was in the late 1990s, and at that time, several co-workers were swearing by it. It supports 9 platforms and 40+ languages, but the beauty is in the extensibility. It will intelligently tag, complete, and prevent a lot of silly syntax errors in a way that few other products do, and do it quite intuitively. Best of all, it opens huge projects fast, and didn’t bog down with anything I threw at it. It has been around for more than 20 years, and the pedigree from those years of tweaks clearly shows.

Luckily, improvements keep coming, and the feature list is really long. Take a look, the program does most of the annoying little things you have to do manually almost automagically, and if it doesn’t, you can add them pretty easily. Slickedit has a complete macro language, and you can add language tags with ease. If that isn’t enough, there is a pretty active user base that posts updates and new sets of tags all the time.

Slickedit also has a built in differencing engine and mini-repository so if you are updating things away from the mothership, you don’t much of the goodn 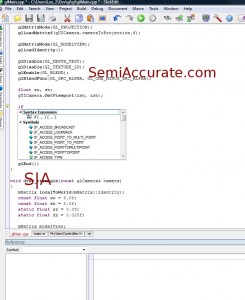 ess your full versioning system has. Think of it as something between history on steroids and a branch of your Git tree, but local instead of remote. It doesn’t take much 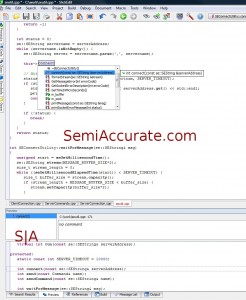 to understand how this can save you.

The latest edition, Slickedit 2011, now adds full native Mac support to the other platforms, basically everything you need to code on. It has a full Aqua interface, Xcode integration, and all the things you need to make the next great soundboard for you iSomething. Seriously though, Slickedit now treats the Mac like a full platform instead of a forced port.

At GDC, we talked to some of the Slickedit developers, including one who did a lot of the work on the native Mac version. He walked us through the program on that platform, and showed us many of the features. Needless to say, we learned quite a lot, including how the camera SemiAccurate used does not like to focus on LCD screens. The video is… err, suboptimal, sorry about that, but the audio is just fine. Luckily, this is better than the other way around, even without the peeps.

If you do any serious coding and you haven’t tried Slickedit, you really should at least take a long look at it. There is a free trial for both the main version and the Eclipse plugin too. At $299, you may consider it expensive, but the productivity the author’s co-workers gained from it was well worth the money. That was a decade ago, and it looks to have gotten much better since.S|A

Editors note: You can learn more about this type of material at AFDS 2012. More articles of this type can be found on SemiAccurate’s AFDS 2012 links page.  Special for our readers if you register for AFDS 2012 and use promo code SEMI12, you get $50 off.  Other ways to have fun is to play the easter egg hunt there is a bonus just for playing.