Making An Argument For AMD’s Trinity

It’s all about Vision…

With Computex coming to a close and AMD’s Fusion Developer Summit set to being next week, it seems that we know all that there is to know about AMD’s Trinity chip. To this end AMD’s John Taylor published a short blog on Monday about the critical reception of AMD’s 2nd Generation of A-Series APUs. He breaks down the reaction to these new chips into three categories: Consumer-savvy, Futurist, and CPU bigoted. He cites a focus on improved battery life and graphics capabilities as the basis for a “consumer-savvy” viewpoint. Futurists, in his mind, are those who focused on Trinity’s progression towards a Heterogeneous System Architecture and the increasing number of applications that support GPU acceleration. And the final category is those commentators who focused on the, relatively weak, CPU performance of Trinity based offerings and proceeded to dismiss them because of it. All in all it’s actually a pretty entertaining read as far as corporate blogs go. 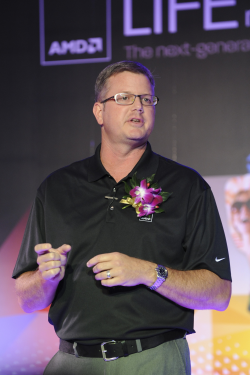 But more to the point this blog hits upon one of the biggest variables that AMD is trying to influence with its marketing campaign for these new APUs, consumer perception. AMD needs to improve how it’s perceived by both consumers and large organizations. If you were to walk up to a hot dog stand in an urban area and ask the cook if he’s ever heard of AMD, he would probably just stare at you blankly and ask if you were from the local organized crime syndicate. Compare this to the response you might get if you were to ask that same cook if he’d ever heard of HP or Lenovo. Chances are he’d recognize them as computer manufactures, and think of HP’s heavily advertised Beats headphones and Lenovo’s ubiquitous Thinkpads.

Now this consumer perception gap is a problem that the staff at AMD obviously recognize today, and have recognized for at least the past few years. The Vision branding campaign that began back in 2010 was AMD’s first really concentrated effort at branding AMD products so that consumers could differentiate between them and the slew of Intel laptops found in stores. The Vision brand also points out to consumers the visual advantage that, more often than not, an entry level AMD laptop can provide you with compared to an Intel based solution.

Needless to say AMD marketing efforts have been getting progressively stronger and AMD’s Vision branding scheme has largely been at the heart of those efforts. Although, that’s not to down play the effort AMD has made to reach customers through social interactions on Facebook, Flicker, and Twitter. Additionally AMD also maintains a who slew of blogs that tend to be updated on a monthly basis, and a thriving YouTube channel. What I’m getting at here is that AMD has the marketing infrastructure in place to make an impact with everyday consumers and enthusiasts alike. Granted, it’s been a long while since we’ve seen any TV spots from the second largest x86 processor manufacturer, but the capability to create advertisements of that caliber is present within AMD.

So getting back to consumer perception I think that it’s very easy to see that AMD has an opportunity, with its new Ultra-thins, to reach consumers that have often failed to notice its very existence. When the first Netbooks came to market AMD was almost no where to be found. It had its even lower tier Geode CPU line, and it had higher end mobile offerings that were not competitive in terms of battery life, which was one of the biggest draws during the Netbook craze of yesteryear. AMD arguably missed the Netbook boat. Again that’s not to say that the Brazos platform, which was AMD’s first real offering for this market space, was a failure; 30 million chips later and it’s hard to say that Brazos was anything but a surprise success. But AMD was only able to capture the Netbook market as Intel was turning its attention towards creating the Ultrabook category and away from that quickly declining market. 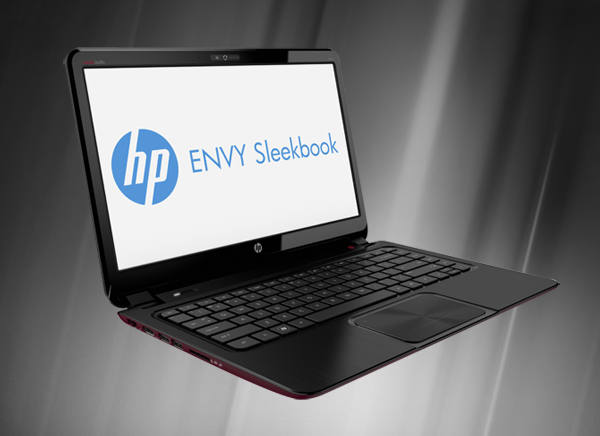 This time things are different. (like we haven’t heard that one before…) But really, Trinity is an award winning product which has had at least a year to come to maturity inside of AMD’s labs. Which is why I think AMD has a shot to, as some older marketing materials put it “change the game”, with its Ultra-thin offerings. Trinity can hit those 17 and 25 watt power envelopes, and can do it without losing the two advantages that this chip brings to the mainstream notebook market, superior battery life and stronger graphical performance. At the same time AMD appears to be undercutting Intel’s offerings when it comes to pricing, and AMD’s OEM partners seem to be out maneuvering Intel’s branding efforts with things like HP’s Sleekbook line of Trinity power Ultra-Thins. Looking purely at the Sleekbook term for a moment, HP has a product name that really conveys the most apparent advantage of the Ultrabook form factor, which is the physical design of these products.

With the exception of super high-end offerings, AMD looks very competitive in the notebook segment and it would be unsurprising to see continued market share gains coupled with a year over year increase in average selling prices in the near future. Trinity is AMD’s most compelling notebook product to-date, and it’s offering AMD a chance to re-brand itself from merely a low cost x86 processor manufacturer, to a graphics focused, yet value conscious choice for consumers. A little more drama in the notebook market is something I think we’ve all been waiting for.S|A