The story of an online community bringing a product to market…

We here at S|A recently got a chance to interview Micheal Mrozek, one of the core members of a small company named OpenPandora, which produces the Pandora handheld gaming console. Long before Kickstarter and crowd sourced development funding became the flavor of the week, the OpenPandora team was designing and producing their own handheld gaming console based off of what their fellow forum members wanted. The idea behind the Pandora was to produce a handheld gaming console that met the needs of their highly active, but small, forum. It had to be a fully functional Linux PC, have an awesome D-pad, and be powerful enough to emulate the mass market console gaming systems that had proceeded it. It took a long time to get all of the pieces into place (read: four years of hardship and delays), but the Pandora has finally matured into the handheld console that its steadfast supporters have always hoped it would.

It’s often best to let those who care the most about  a product describe it in detail. As such we asked Micheal to give us a run down of what specifically the Pandora is. 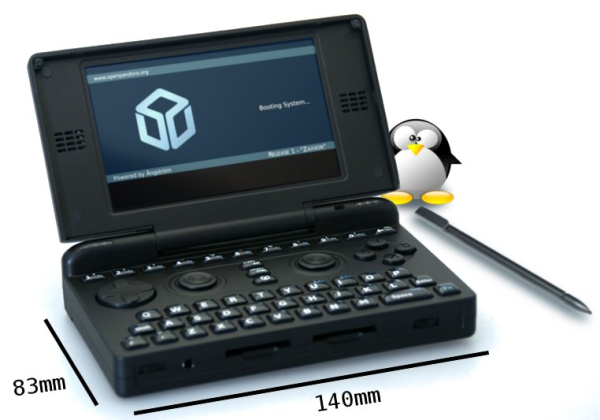 Many of our readers many not know very much about the Pandora, so can you describe the product to me?

That’s pretty hard, as it can do so many things it’s hard to put it into one category. Well, basically, it’s a miniature Linux PC the size of a Nintendo DS, so way smaller than a Netbook. So you got a pretty neat keyboard, a high-res touchscreen, an incredible battery time (over 10 hours in normal usage) and can do things you can do on a normal PC. Coding, Office Work, Websurfing, etc. However, that’s not all. You also have a proper DPad and buttons to play games – and we made sure these are one of the best (as we’re gamers ourselves). So you can both replay classic games (SNES, Genesis, Arcade, Amiga, C64, Playstation, etc.), play Linux or Homebrew games or even code your own games. And another special thing is: It’s open. If you want to run Android on it, you can do so. You rather want Debian, Slackware or Ubuntu? You’re free to do that. It’s up to you what you want to do with your Pandora. We won’t lock you down. Heh, and you can also chat with the creators of the device – ever tried doing this with the PSVita or Samsung Galaxy chief developer?

A lot of people believe that the commercial success of hardware products, like this one, is decided by whether or not it has a “killer” feature. To that end we wanted to know what Micheal thought was the most important feature that the Pandora has to offer.

What is your favorite function of the current Pandora?

Besides being able to play my PlayStation RPG-Collection on-the-go, I’d say it’s not a function but the community behind it. It’s so much fun seeing first versions of new games or ports – and then following the improvements and enhancements which are being included and discussed by and with the community. That’s awesome. It’s also nice being able to play Android games with proper gaming controls and NOT having to fear that they gather any personal contact data from your system.

One of the more harrowing details of the history of the Pandora as a product has been the countless production mishaps, thus we thought it would be nice to see approximately how big the user base is for the Pandora.

Approximately how many units of the Pandora have been shipped?

While 4000 units is a number that compares poorly to mainstream consoles (and Windows Phone 7 sales /pun), it actually a testament to how dedicated the team at OpenPandora is to their product. This is especially apparent when you consider how difficult it is to get a project like this one off the ground, and after you’ve read through some of the news posts on the OpenPandora forums that describe in detail the difficulties of manufacturing the Pandora.

Speaking of manufacturing, the Pandora is a product whose design has continued to evolve since its inception.

The latest version of Pandora seems to have amassed quite a few improvements compared the initial batches back in 2010, what’s changed?

The first initial batch really had some issues. The LCD Cable failed after a while, the nubs did as well. The case also had some weak spots which easily broke. The CPU used back then also had some bugs which have been removed in the current versions. Luckily, all these things were fixable. The new LCD Cables don’t fail anymore – and if an old one fails, we’re replacing it with the new one. Same with the nubs. The case has been improved as well and the weak spots have been strengthened. Oh, and the new units got more RAM – and we also have upcoming versions with a faster CPU. However, all these units are using the same OS and are compatible. This was very important for us. 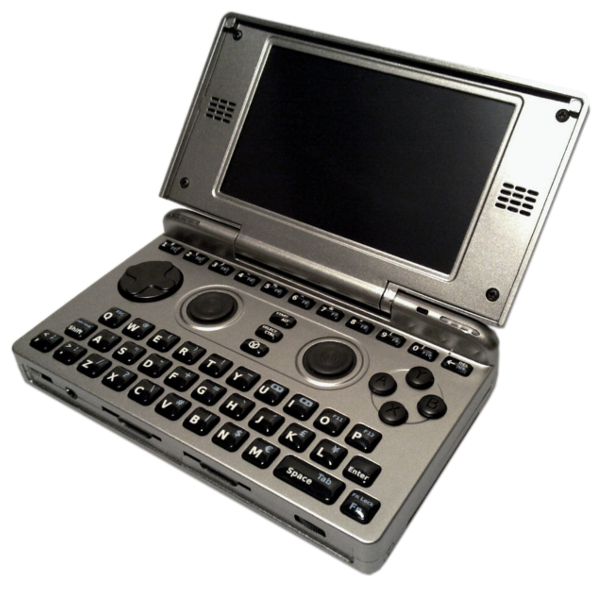 Moving the focus onto an aspect of the Pandora that its larger competitors like to talk about, we wanted to learn more about the ecosystem surrounding the Pandora.

What do you think is the strongest draw to the Pandora, and it’s ecosystem, for prospective users?

It surely depends on the user. I love that the Pandora is open, everyone is welcome to hack on it and play around as much as he likes. And the OS is not crippled – it’s a fully fledged Linux OS. Also, there are no hidden costs. You buy the Pandora once and there’s no need to pay any additional fees or buy games. Well, okay, you need at least one SD Card; And being able to run homebrew and emulators without having the everlasting fight between hackers and manufacturers is great as well. However, while these are strong points for the users who love the Pandora, it also are the weak points for some others. Being open and uncrippled means that it’s a bit more complicated to use than an Android smartphone for example, as it’s a lot more flexible. You can compare it to a normal desktop PC: Even inexperienced users can use stuff like an iPad, but a desktop PC with many possibilities is too complex to them. It doesn’t mean the Pandora is hard to use. If you are experienced enough to know what a ZIP-Archive is, you should be able to use a PC.

The Pandora is not meant to compete for the same class of users that Apple and Nintendo branded products are aimed at. Instead it’s designed to meet the needs of users who are really interested in knowing and understanding exactly how to get what they want from their hardware.

What does the future hold for you and the Pandora?

Who knows? Hopefully, it will continue to sell well. As the Pandora is not being made by a huge company in a developing country, the price is high compared to other devices, like smartphones. However, if you check the message boards, almost everyone will tell you it’s worth the price. We are hoping we’ll be able to continue development and release a Pandora 2 at some point… An OMAP5 with quadcore would surely rock. But it would only make sense if we made money with the Pandora 1 to fund the development of a sequel.

The ~$500 price is the biggest and most obvious draw back to the Pandora, but as any BMW or Audi salesman will be happy to remind you, there is some merit to owning a product of Germany.

What are your thoughts on the sales decline of dedicated hand held gaming consoles (like the PS Vita, and the 3DS) over the past few years?

As far as I know, the 3DS sells pretty well now that it has some good games available. The PS Vita is technically an impressive console – but it doesn’t offer a new in gaming experience. Gamers who have been playing games for years are looking for good games, not only good hardware. As can be seen with all these remakes of classic games we get today (Rayman, Speedball 2, etc.), it’s not all about graphics, it’s about fun and gameplay. And MANY classic old games have more charming appeals than the latest and greatest games. If the PS Vita had more interesting games, it would sell better. I’m also one of these gamers: I only buy a console when there are good games out there. I have a 3DS, but no Vita yet. And I just bought a PS3 – as Tales of Xillia is coming out now. So as long as the new devices don’t offer anything except for a bit better graphics, they won’t sell.

Micheal hit the nail on the head here. Many pundits often talk about the early troubles of mainstream console products such as the 3DS and cite the lack of substantive advantages that they can offer over their predecessors as their biggest drawbacks, and they are not wrong when they do so.

Open Pandora is a very open and community oriented company, what is it like to try and maintain those principals day in and day out?

Oh, it’s pretty easy for me, as I’ve always been honest and open and always loved achievements that were made by a community and not a company.

Recently Open Pandora held an app competition in perparation of a new production run of Pandora units. This event was called the pandora Rebirth Competition.

Are you pleased with how the Pandora Rebirth Competition went?

Yes, there were some pretty neat releases PNDManager really enhances the Pandora a lot. It’s basically an app manager like Google Marketplace – but way more comfortable and nicer (well, in my opinion).

Closing out our interview with Micheal, we decided to hit him with a question that, while a little cliché, often offers a little tastes of a different perspective.

If you could return to the early days of Pandora development and give yourself, or one of your colleagues, a piece of advice, what would it be?

That’s easy: Always work with companies you can easily reach with your car in case anything goes wrong. It might cost more money, but it really helps. That’s the reason the Pandora PCB is now being produced here in Germany and future cases will be produced in England, right around Craigs corner (the iCP case is already being made there). It really is the only way to ensure reliable production.

So if you’re into retro gaming and handheld Linux consoles it would not hurt to spend a little time checking out with the Pandora has to offer. And if you’re planning on attending this year’s gamescon in Cologne you can find Micheal and some of the other Open Pandora guys in hall 10.1, at stand F70. Thanks again to Micheal for finding the time to do this interview.S|A