AMD is Catching Up in the Wireless Display Game

AWD, stands for AMD Wireless Display in this case…

It seems that AMD is having a little bit of a me-too moment in the wireless display category. Intel released a wireless display technology dubbed WiDi back in early 2010. Now the first generation of Intel’s WiDi was abjectly awful. There was no HDCP support, latency sucked, and bandwidth was low. Since then two of those three points have improved and one likely won’t for sometime. Bandwidth is better now that Intel’s WiDi supports 1080P with all of the bells and whistles, and latency has improved to a degree. Unfortunately, the latency is still bad enough to making playing video games on your TV using WiDi an impractical exercise. The final point is the MAFIAA’s HDCP standard support is still non-existent, and it’s likely that WiDi won’t support HDCP for sometime do to its insecure nature as an over the air broadcast. So that means no DVDs or Blurays for any one using WiDi. See how quickly great little ideas like wireless display fall apart in the face of bad implementation and piracy politics?

But enough about Intel. AMD has created a very similar beast under the banner of AMD Wireless Display or AWD. 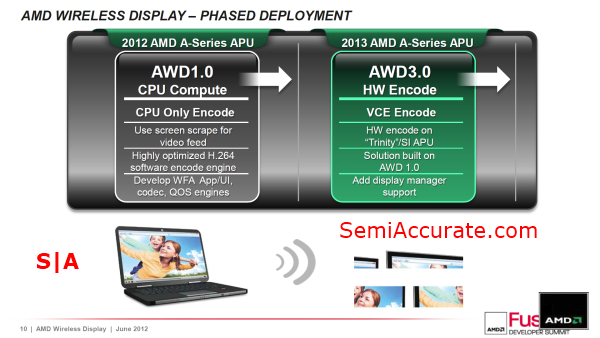 Currently, AWD uses a third-party software encoder to send a mirrored image of you PC’s primary display to your TV using the Wifi Alliance’s WFDisplay Standard. AMD demoed this ability at this year’s CES. The hope is to have a native hardware based solution ready by sometime in 2013. AMD is also aiming to integrate AWD controls into its Catalyst Control Center so you can manage the service from there. 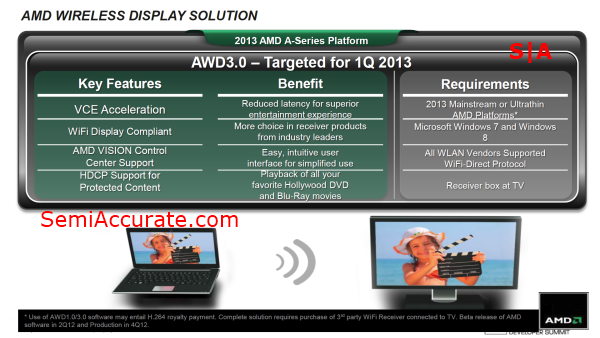 When it comes to dedicated video processing hardware AMD has a long history of being a competitor. Thanks to the fixed function video encoding and processing hardware that they’ve built up over the years AMD is aiming to be able to capture, encode, and transmit videos faster than real-time with future variants of AWD.

Physically, AWD works in almost exactly the same way as Intel’s WiDi. There is a little receiver box that connects to your TV and displays the video stream that your laptop is sending to it over a Bluetooth-like WiFi Direct connection in accordance with the WFDisplay Standard. The biggest difference is that AMD is hoping to exceed the quality of Intel’s WiDi solution by offering lower latencies, support for more video display standards, and the extensive use of industry standards.

The current software based version of AWD called 1.0, does not support HDCP, tops out at 720p by 60 FPS, has between 100 and 200 millisecond’s of latency, and is only partially compliant with the WFDisplay Standard. This is a rather sad state, but AMD is hoping to remedy many AWD 1.0 problems with the 3.0 version in 2013. They’ve promised HDCP 2.1 support, hardware acceleration, 1080p by 60 FPS support, 30 to 60 millisecond latencies, extended display support, as well as full support for hardware scaling, and it will use the all important WFDisplay Standard. 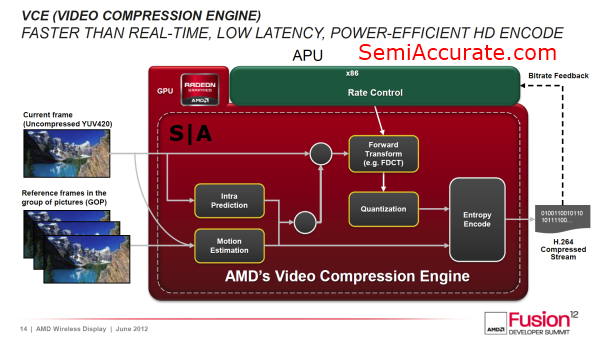 One of the keys to enabling the low latencies and high display rates that AMD is talking about is the recently introduced Video Compression Engine (VCE) which is a piece of fixed function hardware similar to Intel’s Quick-Sync block.

The VCE hasn’t gotten a lot of media coverage up to this point simply because AMD hasn’t done a very good job of supporting it. When it first launched on the HD 7970 in December of last year it was practically dark silicon due to a lack of application support. Luckily, AMD is stepping up to this problem with it Media SDK and introducing native Windows and Linux API that developers will be able to call to introduce UVD and VCE acceleration into there applications. 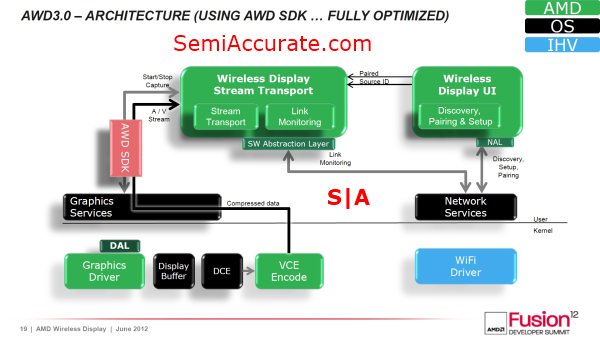 When all is said and done, in 2013, AMD is hoping that this will be the architecture of its AWD technology. It will be interesting to see if AMD is able to roll out AWD 3.0 support for its older platforms, but I wouldn’t count on it.

Outside of the fact that AWD 3.0 isn’t here today, there is not a whole lot to pick on in this roadmap. AMD seems to grasp the concepts necessary to create a truly mainstream Wireless Display experience. Let’s just hope that they’re able to stick to their Q1 2013 launch schedule.S|A