Today is a special day, it’s only a few times a year that we get to see new processors try and carve out a place for themselves in the desktop market. In our Trinity Preview last week we found that AMD’s mainstream wonder chip has enough GPU horsepower to provide a reasonably high quality 1080P gaming experience. Today we’re aiming to find out if the CPU side of Trinity can keep pace with Intel’s Ivy Bridge.

The short story is that it can’t; it’s not even close. The slightly longer story is that it doesn’t matter, in the real world, Trinity still ties with Ivy Bridge at everything. The things that were so fast they just happened are still so fast that they just happen. The things that are so slow that you can get up and grab a cup of coffee are still so slow that you can get a cup of coffee. This is true for both CPUs, but Trinity costs far less and has vastly better graphics too.

Trinity uses the relatively new Piledriver CPU core, which is an improved version of last year’s Bulldozer core, so it falls less woefully short of Ivy Bridge in numeric benchmarks. Most of you have already read quite a bit about this new core here at S|A. So we’ll spare you the rehashing of its specific improvements, but suffice to say that AMD is touting a 25 percent performance increase in PCMark 7 over the prior generation of APUs codenamed Llano. We won’t confirm that claim today as were not testing Trinity against Llano, but we will see how this new APU fares against Intel’s offering. 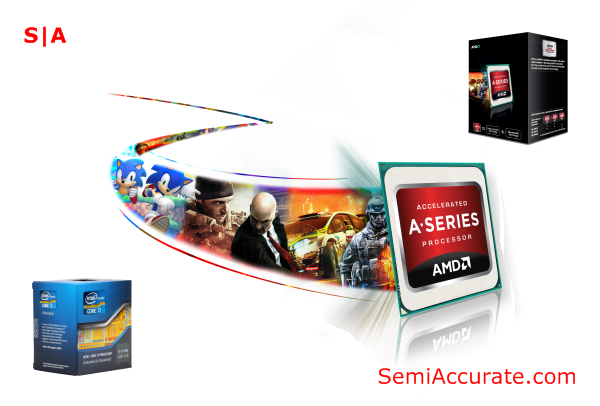 The specific APU that we had to review was AMD’s top Trinity chip called the A10-5800K. This chip is clocked at 3.8Ghz, with TurboCore up to 4.2Ghz on all four cores. On the other side of the fence, Intel’s top Ivy Bridge chip is the Core-i7 3770K. Clocked at 3.5Ghz with TurboBoost up to 3.9Ghz and packing four cores as well, this chip has more CPU power than most users need. We’ve got the best of both breeds going up against each other in this comparison.

Since we reviewed Intel’s Core-i7 3770K back in April we’ve made some changes to our benchmark suite. We’ve expanded it from the eight benchmarks to eleven. Hopefully the additional benchmarks that we’ve added will give you a clearer picture of how these two chips lineup against each other. Without further adieu lets see how these two chips stack up.

Let’s break this down on a case by case basis. Cinebench R11.5 scores have been a sore spot of in reviews of AMD chips for quite some time now, and today is no exception. In the single core benchmark, Trinity is about 60 percent slower than Ivy Bridge and it gets worse when you move to the Multithreaded benchmark. There Ivy Bridge offers 2.4 times the performance that Trinity can muster.

wPrime is another benchmark that is not very kind to Trinity. Ivy Bridge offers a little less than double the performance of Trinity in both the 32M and 1024M tests. If you were hoping that AMD could manage to produce just a bit more performance than that, then now is the time to shed but a single crocodile tear.

Let’s look at these benchmarks from another, hopefully more interesting, angle. If we average the difference in performance between the these two chips in terms of Trinity’s scores divided by Ivy Bridge’s, we can come up with a rather interesting data point.

AMD’s top Trinity chip, the A10-5800K, offers 57 percent of the performance of Intel’s top Ivy Bridge chip, the Core-i7 3770K, on CPU only workloads. Essentially, Trinity’s CPU is only about six-tenths as fast as Ivy Bridge’s.

Now I could break out my violin and start playing you the most gloomy song in my repertoire while this performance data sinks in, or I can offer you more realistic perspective. In my testing the one thing became exceptionally clear was that, whether it was AMD or Intel, the user experience felt the same. Yeah, it takes Trinity twice as long to encode a movie in Handbrake so I can watch it on an iPad, and yes, it does take an extra Trinity an extra 60 milliseconds to finish the SunSpider benchmark. But the tasks that you expect to be quick, like web benchmarks, are still quick; and that the tasks that you expect to be slow, like encoding or long number crunching, are still slow. CPU performance does not affect the real world user experience any more.

The numbers that we are showing you today tell one story, and actually using the system tells another. Make no mistake, by no means would I ever consider either Trinity or Ivy Bridge to be slow chips when it comes to crunching numbers. And this is part of the problem, because more CPU performance doesn’t allow you to turn up the encryption quality or encode a longer movie, so is it relevant? More GPU performance does allow you to increase the resolution of your video game or turn up the image quality settings while still maintaining play-ability. CPU performance has no real analog to this. The real issue here, or should I say the real Achilles heel of Ivy Bridge’s performance advantage, is that the tangible benefits of a CPU that is twice as fast as the competition are significantly smaller than the tangible benefits of a GPU that is twice as fast as the competition. In some sense these two competitors are both fast and slow, and they just happen to have the biggest performance advantage in the areas where the other is the weakest.

Assuming you had a choice between two equal priced Trinity and Ivy Bridge chips, the trades offs of picking one over the other are quite clear. If all you do is read SemiAccurate, render high resolution movies, then re-encode them to send to your iPad, then you should opt for an Ivy Bridge processor. Conversely, if all you do is read SemiAccurate and play Boarderlands 2 then you should chose Trinity. But either way you should definitely spend more time reading stories on SemiAccurate, and for that, both CPUs are overkill.S|A