AMD’s new Vishera based FX CPU is bursting with excitement

Not really, but indifference is hard to get a splashy headline from

We have finally reached that day that you have all (Yawn) been waiting for, the release of AMD’s Vishera. This new Pildriver cored Bulldozer part that is aimed at high end desktops and gamers.

If you take a Bulldozer core and the uncore that was so nifty last year, and then simply slap in a Piledriver core, you have Vishera. If you think a year+ old uncore with no changes, no PCIe3, no additional anything coupled with minor polishing of the cores underwhelms, you are pretty much dead on right. Color us unexcited.

The new CPU is OK but that is about all we can say. It does everything better than Bulldozer, and is about 15% faster in total. That is about it. Does it close the gap to Intel? No. Does it Narrow the gap? A bit. Is it a decent upgrade from Bulldozer? Yeah. Anything else? Not really. Here are the most pertinent specs in a nifty table format. 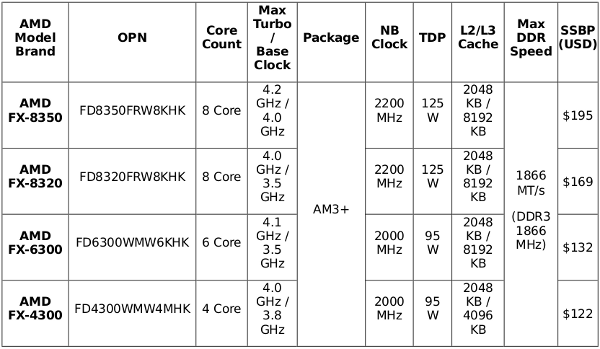 The specs of the chip that we are talking about

We normally put out a die shot here, but the ones AMD provided were pretty and large. Unfortunately they lowered the rez to the point where anything interesting was totally obscured, then blew them back up. The end result is not worth the bandwidth, so we will spare you. The uncore is exactly the same as in Bulldozer, the core is exactly the same as in Piledriver. With a bit of imagination, you can do far better than what was provided, using crayons.

But wait you say, there has to be more! And in this case there is. The die size is 315mm^2, exactly the same as Bulldozer, as is the claimed transistor count of 1.2 billion. And the rest you gasp? Actually, that’s about it. Really. We weren’t kidding with the (Yawn) bit earlier. If you want the testing results, read Thomas Ryan’s review here.S|A