What do you get if you replace the Bulldozer cores in AMD’s Interlagos CPUs with Piledriver cores? Just like with Vishera, you get a yawner called Abu Dhabi that brings little to the table.

The short version of the story is that AMD pulled their 10 core variant of Abi Dhabi from the roadmaps and put in an 8-core version. This chip is noting more than a mildly warmed over version of the current Interlagos/Valencia CPU with a Piledriver core instead of a bulldozer core. Like the consumer oriented Vishera, it is a yawner. Why? It brings nothing new to the table but incremental increases in energy efficiency and absolute performance. The Piledriver core is about 15% better than it’s predecessor and server parts might eke a bit more out of the total than that.

Unfortunately, AMD is woefully behind Intel with their stunningly good Romley platform, and 15% is not going to close the gap, not even close. To make matters worse, AMD did not touch the part that is farthest behind, the uncore. The dual die 16-core Abu Dhabi and it single die 8-core Valencia don’t have PCIe3, don’t have USB3 natively, and are, well, way behind the times. It is a stunning omission, but understandable.

Abu Dhabi is significantly more exciting a place than a chip

Back to the disappointment. Remember when we took AMD to task for “Project Win”? Well, this is what you get. When we said that you can’t delay a semiconductor product cycle to suit economic needs however imperative they are, we mean it. What helps make Wall Street happy 18+ months prior is an unmitigated disaster when the results meet silicon. Instead of a 10-core PCIe3 CPU, you get a mildly tarted up version of a design that was not competitive to begin with. This is not the tool you want to try to lead the charge to increase your 4% server marketshare with.

Is it better than Interlagos? Sure. Is it good enough in face of Intel’s year old parts? Not even close. Will it win any new customers? Not a chance. Will it tempt Interlagos customers to upgrade their CPUs? Even that is unlikely. The situation is dire, and Project Win did nothing to speed up future developments either. Why do we have such a dire prognosis? Take a look at the one, note the lack of pleural, benchmark vs Intel that AMD put in their presentation. 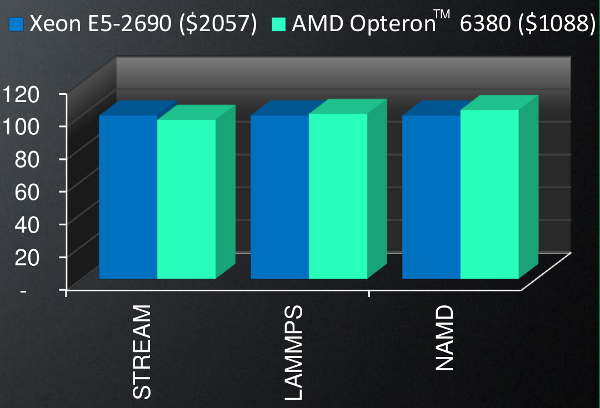 The Abu Dhabi and Seoul CPUs are better than their immediate predecessors, but still not competitive with their Intel competition. The Piledriver cores are indeed 10-15% faster than the Bulldozer cores they replaced, but still far from enough to win new customers. They may be a worthwhile upgrade for some existing Opteron customers, but there is precious little there to recommend to a new installation. Until AMD gets their uncore updated to modern technologies, this situation is unlikely to change.S|A

Author’s note: A lot of people blame Dirk Meyer and his team for this misstep. If you look at what happened, it is very clear that his regime was not to blame for this debacle. They had a 10-core Abu Dhabi with an updated uncore on the roadmaps. Once he was ousted, the new order, likely due to Thomas Seifert’s “Project Win”, castrated the 10-core part and did the minimum possible job for the lowest cost. This is the main reason we said that AMD’s management doesn’t understand semiconductors. The current regime has technical people in place that do understand semiconductors and are top notch technical people, but this was already set in stone before they were hired.