AMD Open 3.0 board spec is out for all to enjoy

AMD is announcing an Open Compute line of server boards today from a project called AMD Open 3.0. Calling it a board or a few boards is a misnomer, it is really more of an ecosystem.

If you are not familiar with the Open Compute Project, it is basically a Facebook led project to standardize some aspects of servers for the megadatacenter crowd. It aims to lower costs, ease concerns about spare parts, and generally make things easier and more available. The concept is pretty easy, but getting Intel, AMD, ARM vendors, OEMs, ODMs, and a host of others together is worse than herding cats. That said, Facebook’s rather substantial purchasing power, not to mention Google and the rest, made that task a bit easier.

Back to AMD, the board they are introducing is modular in the sense that it has lots of optional parts, you can order an AMD Open 3.0 board with lots of SATA ports or few. Same goes for DIMM slots, PCIe slots, and a host of other things that you may or may not want. The first unusual thing about this platform is that AMD doesn’t make any boards, they just defined the spec with the help of big customers. No single ODM makes them either, Tyan and Quanta are the initial makers but others can likely jump in. Complete systems can be had from Avnet and Penguin initially, plus a host of compatible cards from many vendors. 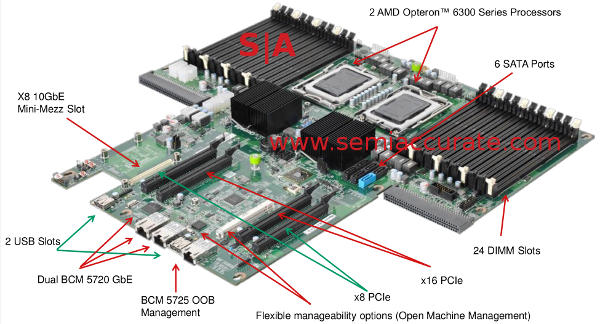 The full board with descriptions, others may vary

The first thing you notice about the board itself is the rather unusual shape of the board, a T rather than the usual L or notched square. There is a practical reason for this, some Open Compute customers wanted power on the left, others power on the right, and a few more wanted redundant power. Since the idea is to please everyone, AMD did just that with left, right, and redundant in one board. It is also designed to fit 1, 1.5, 2, and 3U chassis, again from multiple sources. The idea is to have mix and match parts, and that is exactly what you get.

From there you might notice a few oddities not found on normal server boards like the mini-mezz slot for eight 10GbE ports and the out of band management port, not to mention the slot for Open Machine Management (OMM) hardware. The GbE slot is pretty self-explanatory and mezz means mezzanine, but the OMM spec is a little more obscure.

The base Open Compute definition calls for a minimal level of out of band management, less than any of the full OOB stuff out there, but enough to do the job. More importantly, it is compatible between vendors at that level, but supersets will be common. That base level is built in and the OMM slot lets a customer take things a bit farther by putting in a card. OMM defines the physical, mechanical, and electrical characteristics for an add in card, but not necessarily anything about what it does. If you want remote KVM and all that stuff, there is now a defined slot that multiple vendors can build devices for, and one will probably do what you need.

From there you have the multiple ODMs, multiple chassis makers, multiple VARs, and multiple everything-else-providers making parts, cards, and even Hello Kitty stickers that fit the chassis properly. AMD and others are pre-certifying hardware as compatible, with some of the results like memory compatibility going up on the Open Compute site at the end of Q1. More categories will follow, and if everything goes like it should, datacenter buyers can just pick and choose from a multitude of vendors with compatible offerings.

Lets get back to the most important bit, the boards. There is not one board or even one category, and there are currently two ODMs each making a family of boards for three categories of buyers. Cloud, HPC, and storage are the three main groups for now, but those are likely just a start. Storage has a lot of memory for caching, tons of SATA and SAS ports, and as many drive bays as you can cram in the box. HPC is light on memory and storage but heavy on the CPU side. Cloud is in the middle with generous portions of everything, but not to extremes of the other two.

The nice part about AMD Open 3.0 is that if these particular categories don’t fit what you want to do, call Quanta or Tyan and spec out the boards you like. Since most of these things are a subset of the fully populated version, it is just a matter of not putting the stuff you don’t want to pay for on it. There should be certified solutions for just about everything under the sun in short order, both hardware and software.

In the end, the Open Compute platform is designed for the buyer, and a very specific buyer at that. AMD Open 3.0 is just a board ecosystem that is compatible with the rest of the spec, even if it is in many ways the heart of it all. This announcement is going to be followed by many more from many vendors, and so it will go. The FaceBooks, Googles, and others of the world will have a menu to choose from and a far lower spare parts catalog to stock in the shed behind megadatacenter #17. OpEx should go down for them, and vendors should have a clear path to get in to this lucrative market, along with a stamp of quality to save on the hard questions. It is a win/win for all involved.S|A