Given the lack of new CPUs and chipsets lately, you would be forgiven if you expected Gigabyte to not have anything new at CES. While they didn’t have anything SemiAccurate handn’t previously heard about, there were no less than three things we had never seen in person at their suite.

The first was the most visually impressive, a setup with four 1080p monitors from a single Ivy Bridge board, all using only the integrated GPU. We told you how this was done over a month ago, but there was no fanfare from Intel, the mobo vendors, or anyone else until we almost walked in to one. In essence, this driver update breaks each monitor’s signal up in to two distinct 1080p signals likely through timing tricks. You can put out four distinct 1080p screens, or you can do one big 4K picture like Gigabyte was demoing. 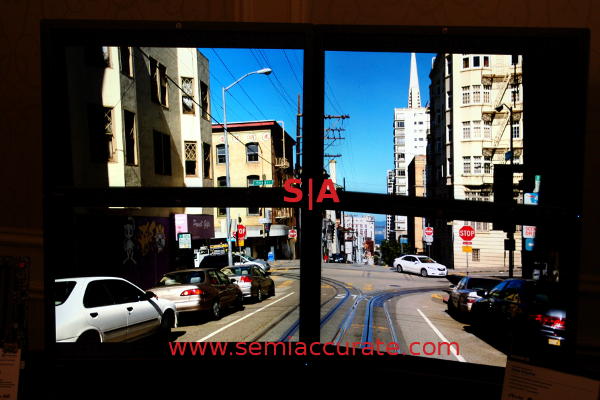 Only two more to catch up to AMD. Where AMD was three years ago. Without timing tricks. And drivers that work. All sarcastic backhands aside, it is a neat trick, we are just not sure that Intel has the GPU power to drive anything other than simple video at half that resolution, not to mention at the full 4K. When this update gets out in to the wild, we shall see how it performs, but the digital signage set is going to love it, especially given how much it doesn’t cost.

The next one was something that Gigabyte told us about at IDF, the thin ITX form factor boards. These are going to be the catalyst for an upcoming revolution in white box/DIY all-in-one (AIW) form factor machines that Intel hopes will flood the market soon. While AIW computers are less noxious than some ‘new and exciting’, not our view, form factors, we are not exactly blown away by them.

The last new thing that Gigabyte had was related to this, but it was from their OEM division. They had the first AIW case design that a local PC store could buy and fill with whatever components they want. In something of an ironic twist, these cases were the perfect match for the Gigabyte half-height ITX boards mentioned above. If you are going to do one half, doing the other is good business. Gigabyte is doing both, and both are the first of their breed we have seen in the wild.

Last up, we feel obliged to mention that in the corner of their suite, there was a lone Trinity board playing Dirt 3 on three 1080p screens at fully playable frame rates. No driver tricks, no hacks, no skips, just a fully playable game on a lot of very wide screens. Not sure exactly why we are bringing this up, we have seen it and more before. It doesn’t fit the themes above, but it sure did look nice and smooth.S|A