CES 2013: Nextbook 7GP and 8GP were a pleasant surprise

You have probably never heard of a tablet maker called E-Fun before, but CES showed that they are worth a look next time you are tablet shopping. The company makes two things, Android tablets and digital pens, and they are not distracted by chasing every little niche out there.

E-Fun is a Chinese company who’s name works in English as well so they kept it, but they did make two main sub-brands, Apen and Nextbook. In case it isn’t obvious, Apen makes various styluses for tablets and laptops, Nextbook makes Android tablets. Unlike some other conglomerates, this is all they design, manufacture, and sell. They have their own engineers, their own factory, and do as much of a device internally as they can.

First up is the Apen Touch8 Smart Pen, a device that plugs in to your USB port then clips on to the side of your monitor. The clip reads a wireless stylus with ultrasound, bluetooth, and other methods depending on the model in question. The not quite released yet Touch8 is meant for Windows 8 of course, the older model range called A1-A5 varies in application and price, ranging from $79-129. When it is released in the near future, the Touch 8 should be on the higher end of this span, but if you need a touch for Windows 8, this is much cheaper than buying a new PC. Better yet, ditch Windows 8 entirely and be far better off.

The other two devices are tablets, the Nextbook 7GP and 8GP, and they should be released any moment now. To be honest, when you hear the words, “We have a really nice inexpensive tablet” at a trade show, most press brace themselves for something really painful. They are usually shown something made of thin tissue paper, a touch screen as responsive as an IRS question line, features that compare to a 1974 eastern block ‘luxury’ car, and build quality that would embarrass a kindergardener’s first popsicle stick and paste masterpiece. When you hear the words “inexpensive tablet”, fight or flight usually takes over and few stick around. More often than not a night in jail after a fistfight is the better option.

With Nextbook however, I knew the PR person telling me about the devices and her pitch was simple, “Take a look at them, they are really nice, a lot better than you would expect. I think you will like them.” So I did, and guess what, she was right. Nextbook has a couple of tablets that are unexpectedly solid, responsive, and didn’t have a feature list that compares to a sensory deprivation tank like most products in this class. That said, my pictures below turned out badly, they look better in person, really. 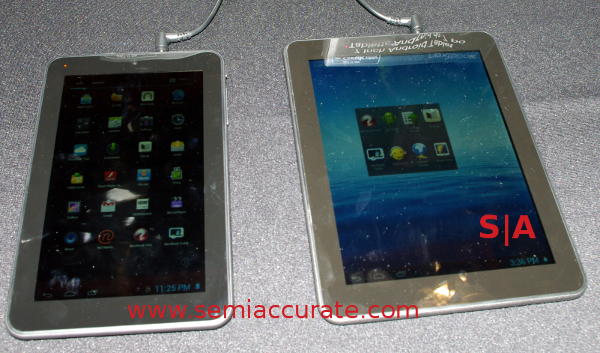 The two are quite similar in specs, but look completely different when held next to each other. Why? Aspect ratio. The 7GP is the industry standard 16:9 form factor that is good for movies but a waste on real work. Luckily, the 8GP is more towards the good old 4:3 ratio, but I am not 100% sure they are exactly that. Neither model has their web page live, not surprising since they have not been officially released yet, so no exact specs. That said, if the aspect ratios are what I think they are, they would be 1280*720 and 1280*960 panels respectively.

Both run Android 4.1/Jelly Bean, and have a 1.5GHz AMLogic CPU which almost assuredly is an A9 core device. They have 1GB of DRAM and 8GB of flash in the lower end models, but if the 7GP and 8GP follow the lead of their immediate predecessors, there will be models with more storage offered too. Since both have a microSD slot, and brand name 32GB UHS1 cards cost well under $50, who cares?

Both are also certified for Google Play and the Google Store meaning they passed all the Google DRM and compatibility tests. This may seem like an obvious thing, you probably assume that Android = certified, but if you roll your own and put it out, you don’t necessarily get access to the app goodies including DRMed content. DRM is evil and anti-user, but it does mean certain standards have been met. Most bargain basement tablets can’t claim this, it is very rare in the price class that NextBook plays in.

Last up is the screen type, it is the major difference between the 7GP and 8GP. The smaller one is listed as a high definition color screen with capacitive touch sensors, so far so normal. The 8GP has the cap touch sensors too, but the screen is a full IPS panel. Yup, IPS comes to the inexpensive end of the tablet market, who would expect that? The 7GP does not look bad at all, but the 8GP stands out comparatively, it is very nice looking and bright.

Both are solidly built too, when you pick them up, they have none of the horrid flex-y feel you expect from the build quality of a sub-$200 tablet of a year ago, much less two years ago. While not perfect, the 7GP and 8GP felt decent enough that I am not concerned about build quality. It may not be a seamless slab of black with patented rounded corners like some devices, but it was far far better than I was expecting, dare I say good?

The reason I set my expectations low is that the Nextbook 7GP and 8GP are really inexpensive tablets from a Chinese manufacturer that has very little brand recognition in the US. That is normally a recipe for disaster but this time, it meant a solid product at a price that made me do a double take. Before I tell you, what do you think a decently built 7″ Android 4.1 tablet with a 1280 screen costs? $129 MSRP, the IPS screened 8GP lists for only $169, and both should be found at etail for much less in short order. It is almost worth picking up a few just to have around at that price.S|A