Adata had the usual display of bigger, faster, and cheaper memory products on display at CES along with a new product category entirely. This new category is one that you will be seeing a lot of soon, NGFF SSDs.

The first new product is one that all modern memory vendors are going for, enterprise class SSDs. Given the lucrative margins they command, it isn’t exactly a surprise, but the engineering involved is a bit more than many expect. Enterprise class margins demand enterprise class reliability, and if you don’t actually offer that, you won’t be in that business for long. To this end, Adata has been making enterprise class devices and memory for a while so the new SX1000 SSD will probably do just fine. It comes in 240 and 480GB flavors, and has a very plain white label, enterprise customers seem to be averse to bright colors and logos.

Moving to the complete opposite end of the spectrum, we have the Dashdrive Air AE400 thingy. We say thingy because like the Kingston Wi-Drive+, the AE400 does a lot of things in a small box. It starts out with a 5000mAh battery, about 3-4x that of a smartphone so it should work for quite a while on a single charge. It will even have a reasonable lifespan after recharging a phone or two, something that could come in quite handy. 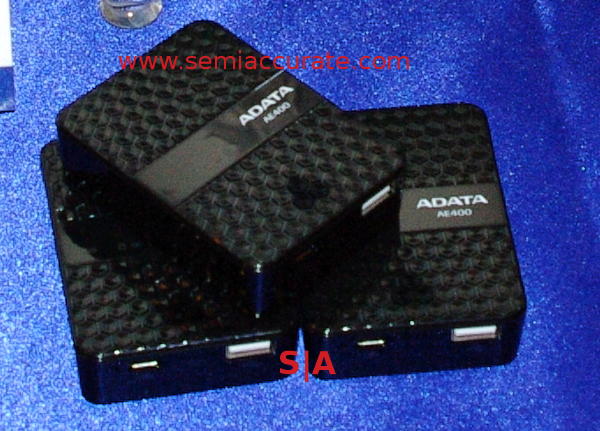 The main use for the AE400 is not a big battery in a shiny black scalloped case, it is a wireless storage, err, thingy. It has 10 user Wi-Fi hotspot capabilities, an SD card reader, and a USB port too. Put your flash card or drive in and wirelessly access it from all your devices. Adata includes support for iDevices, Android, OSX, Windows, and Linux, plus in-app support for the mobile OSes. You can offload images and videos as well as share them around locally.

If the storage provided by a USB stick or SD card is too small, you can step up to the Dashdrive Air AE800 for all your storage needs. This plain black case that looks like a slightly long portable 2.5″ USB HD. This similarity is because the AE800 is a portable 2.5″ 500GB USB3 HD with a 5100mAh battery and most of the AE400’s Wi-Fi goodies put in as well. Rotating magnetic media will drain the battery much quicker than the AE400, but the smaller box is way over-batteried, so this should not be a big problem.

The hot-spot only supports 8 users, but it allows for simultaneous HD and internet data transfers. On top of that, the AE800 is a Wi-Fi signal extender/transceiver, quite the useful feature in most buildings. The AE400 may have all of these too, they might not have made the short trade show spec sheet, but the AE800 looks to hit all the right buttons for this class of device.

The next thing up is probably the biggest deal, an SSD with a new interface and form factor collectively called NGFF. It is for all intents an updated mSATA standard but smaller and better thought out in most ways. mSATA is a 51x30x4.85mm while NGFF is 45x22x3.85mm, and there is only one dual use connector. This connector is split in to three sets of pins called the B and M keys on the edges, plus a common set of data pins in the middle. The B key signifies SATA or 2x PCIe, the M key means 4x PCIe. If both are present, it will work in either socket, but only at the slower speeds. 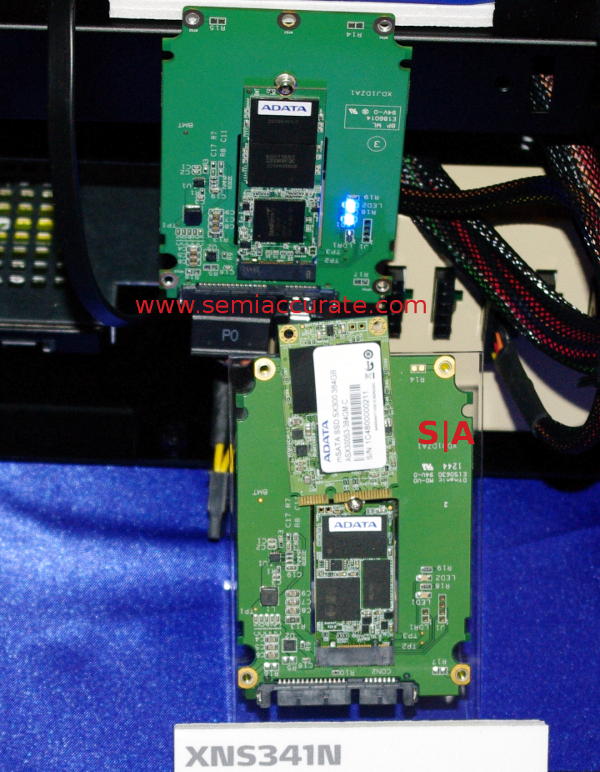 NGFF in the wild with an mSATA in the middle

This may seem far too complex for a rational spec, but if you consider it is aimed at Ultrabooks, stupidity and needless complexity is de rigueur. This is nothing that Adata devised, NGFF is a SATA-IO spec, they just make devices that customers need. In that regard, the bottom device called the XNS341N is an M.2 2242 interface NGFF card with a JMicron JMF667 controller. It comes in 24, 32, and 64GB sizes so it is obviously aimed at the boot cache market. The top drive is the XNS360E, a M.2 2260 interface part with an LSI SF-2281 controller. It comes in 64-512GB capacities and is a true mSATA SSD replacement. This is the future, get used to it.

Last up are two SD cards that are firmly in the evolutionary category, but worthy nonetheless. They are both variants of the 64GB UHS-1 SD card I use for all my pictures, and I can’t recommend the line highly enough. The 64GB SDXC card was the largest offered a few months ago, but as of CES, you can now get a 128GB version. At Computex, the microSDXC UHS-1 card line topped out at 32GB but now comes in a whopping 64GB version. I can say first hand that both are faster than any equipment I use with them, and the new ones are unlikely to be slower, so two thumbs up for progress. Evolutionary improvement is not a bad thing, especially in cases like this.S|A