PQI was at MWC this year and they not only had just one cool device but four that were all pretty interesting. Better yet two of them were categories that I had never seen before, not a common occurrence in the memory world.

The four devices were the Thunder IV, the I-Mini, Air Card, and an unnamed as yet NFC device. The first two are variations on an old theme, speed and size, but the Air Card and NFC are quite new. Below are the Thunder IV, you can tell it by the Thunder script on the side with an, umm, err, lightning bolt beside it. The I-Mini which is barely bigger than the USB socket and the red and black NFC are beside it. 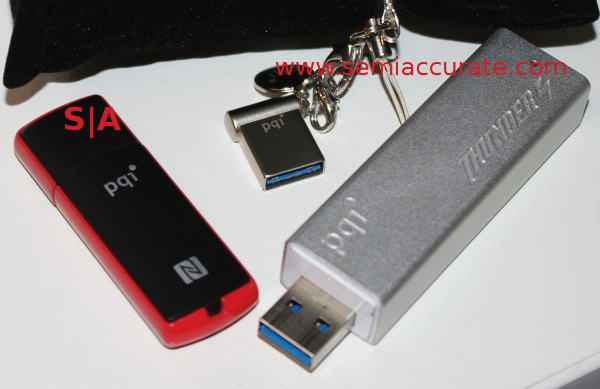 Three of the four flash drives

PQI claims that the Thunder IV is the fastest drive out there with 360/340MBps read/write speeds. Unfortunately that number didn’t hold up for long because as the day came to a close the speeds were changed to an official 400MBps read rate. If you look at what percentage of the theoretical USB3 data rate that is, you can see how hard the bus is being pushed. I-Mini on the other hand isn’t very fast, it is a USB3 drive without RAID or multiple channels. This puts it at a small fraction of the Thunder’s speed, but it can pack 16-32GB in that space with a 64GB version very likely coming soon. The Thunder goes up to 256GB and more is undoubtedly coming too.

Last of the trio is the NFC drive, a product so new it didn’t have an official name yet. The idea is simple enough, the drive is encrypted with a key that can only be applied by NFC transmitters aka your phone. You plug the stick in and get garbage until you hold your phone up to it for a few seconds. The idea is interesting but it all hinges on how well the software is written. If done right, great, if done wrong, you may have to re-authorize every few minutes. More important is the key backup, if you can put a copy on your PC or another device, great. If not a loss of your phone to the toilet monster’s moist embrace or worse yet a mugging means your data effectively is lost too. Not good. Lets see how it turns out in practice before we make up our minds though. 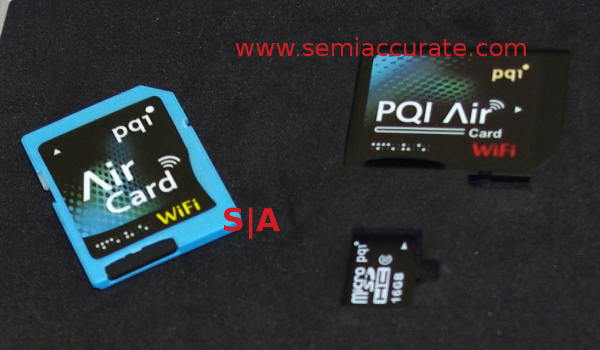 Two Air Cards are better than one

The Air Card is a take on the old Eye-Fi wireless SD card. Instead of a fixed capacity, the Air Card has a microSD slot so you can put in any card up to 32GB and get a full size SD card with the same capacity out. It is essentially a Wi-Fi sleeve for microSD cards, quite a clever idea. How it turns out is very much the same as the NFC drive above, it all hinges on the software PQI has for it. If done right this could be a very nice device, done wrong it will all end in tears. Since both are rather neat and have potential, lets hope PQI did everything perfectly.S|A