At MWC, Griffin was showing off a product that was not revolutionary, evolutionary, or even unique, but their wood headphones were quite nice. Not only that, they had wood ear buds and cables to match.

The technology behind the Griffin WoodTones is nothing new, take headphones and accessorize them with a splash of wood. If you are expecting the next bit to be, “and then world peace happens”, prepare to be disappointed because they are just headphones with wood trim. WoodTones are an over the ear headphone that has a generous size for the cup so a corner of your ear doesn’t get pressed down and they isolate fairly well for a headphone of this price. 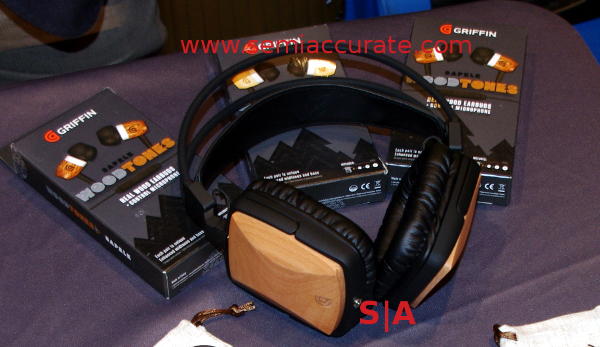 There were also some ear buds with wood trim too, but since I think the concept of buds was created by a dark power with ill intent, I didn’t try them on. That said, they are probably vastly better than the medieval torture devices Delta gave out on the flight to MWC, but that is a different tale of woe and leaving-good-headphones-at-home. They also had cables with wood trimmed ends that were cute but again not unique either.

As you can see, they are simply decent headphones and ear buds with trim in beech, walnut, and sapele. [Sapele: Entandrophragma cylindricum is in the same family as mahogany, a tropical hardwood.] The headphones retail for about $79, the buds for around $25, but even at that price, world peace is right out. If you are looking for headphones with a bit of class instead of having a bright ad for a high school dropout on the side, take a look at the WoodTones.S|A