MWC 2013: Spain steps in to the cell phone business for real

Geeksphone has two claims to fame, the first being they are the only phone maker in Spain, period. You would think there are more, but I can’t find any, please write if you can. Their second big talking point is that they use the Firefox OS exclusively in their two products, Keon and Peak. In the world of phones with big numbers, the specs may not dazzle, but having played with the phones for a bit, they are not at all slow. 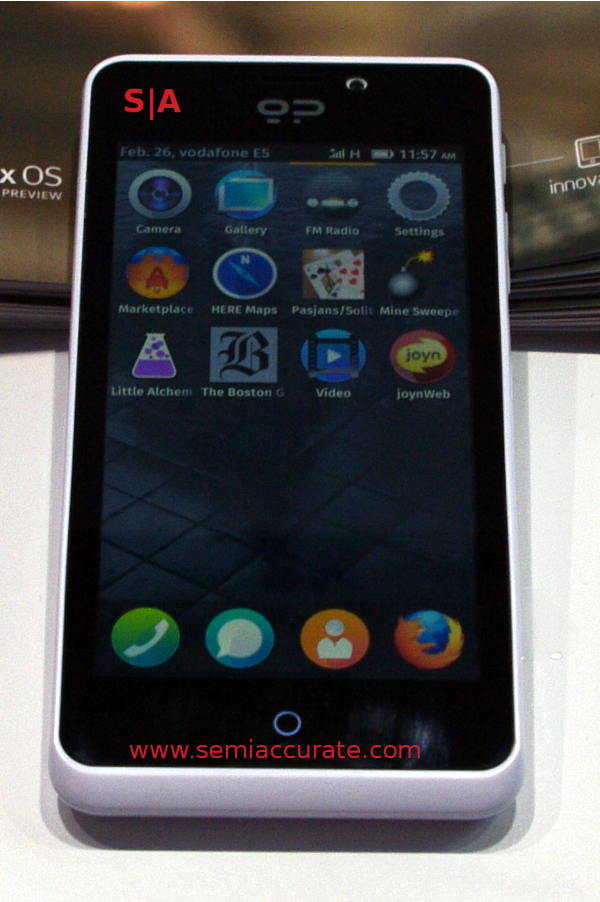 If these specs seem something between glacial and 20th century, technically you would be right. In use however that it doesn’t matter. Why? The Firefox OS is unlike any desktop or phone OS, the software stack is a bit inverted. Apps running on Android or iOS for example have a *NIX kernel, and OS layer on top of that, a browser on that, and the web app as the cherry. This is layer on layer, and each one adds some memory use, latency, cruft and bugs.

Firefox OS on the other hand does nearly the opposite, it has the *NIX kernel on the bottom in a layer called Gonk, app layer on top of that called Gecko that uses HTML5, JS and other web related technologies, and the Gaia UI layer on top of that. Firefox loads the browser, or at least the Chrome layer, directly on the kernel as the Gecko layer. What most users consider to be the OS is loaded on top of that as Gaia, effectively a web app. When you are in an app proper, the OS does not need to be in between the two, it can either be paused or completely unloaded, the Gecko layer is effectively the OS. It does not have to consume resources, be they memory, bandwidth, or CPU time if it is not necessary.

If you look at the uses for a modern phone, there are three major types of apps, web apps, native apps like games, and web pages proper. Of the three, two of them have at least one big software layer, the UI, taken out of the picture. On Android, the Dalvik VM is another abstraction that Firefox doesn’t need, it runs pure HTML5 just above the kernel, nothing between. If it matters, the full layer count in Firefox OS is three, Gecko, Gaia, and Gonk.

Native apps like games are going to still need the same grunt they do on the other platforms, but there will still be lots less overhead on Firefox. This does translate in to better performance from less hardware, or better battery life for the same perceived performance. However you get your performance or use your battery is up to you, but most people agree with the idea of wasting less wattage while doing nothing useful.

So what does all this cost? The Keon costs a little over 100 Euros and the bigger Peak is slated to cost under 200 Euros, both unlocked. That is the other side of the thin layers, less hardware also means less cost, and to many that is the most important metric out there.S|A