Yesterday at GDC, AMD pulled a surprise move that absolutely floored the entire assembled press in a way that hasn’t been done in a long time. Yes, when AMD introduced their new line of server GPUs called Sky, it had a really good marketing name.

I know, who would have believed it, AMD getting marketing not only right, but dead on? The GPU itself is old hat, as are server GPUs, but them nailing marketing? No, we are not joking either, they really nailed it. The Sky line, that’s a pun – get it, is aimed at cloud gaming servers. Sky, cloud, now you get it? I wouldn’t have believed it either, and I don’t mean the hardware part. 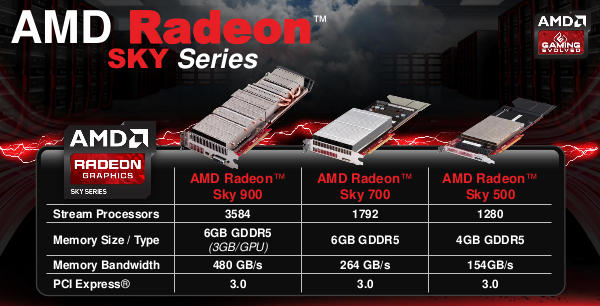 The Sky line has three features, a bit less than a big city

The line itself consists of three cards with the specs shown above. The 900 is a dual Tahiti, the 700 is a single, and the 500 is a Pitcairn based board. There were few other specs given out, but one interesting thing to note is that the Sky 900 is relatively memory light compared to the others, both of the others have 2x the normal desktop memory complement while the 900 has ‘half’ that of the 700 per GPU. This could be for power savings or more likely just geared toward less virtualized workloads that need more GPU power per user. 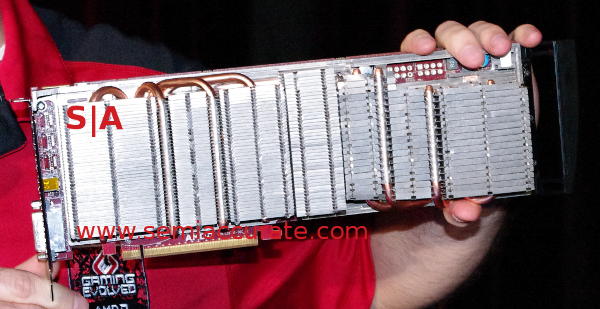 A nearly finished part of the Sky line

The engineering sample Sky 900 above is not functional but in the demo room next door there were several running. This is a real product line that should be shipping to partners soon, but don’t expect to see it on retail shelves, it will almost exclusively be bundled with servers by VARs. The market that it is aimed for is one of volume and complete servers not individual parts.

Since the Sky cards are aimed at servers, you would probably expect them to be priced in a similar manner to the professional parts like Firepros and Teslas. This is where AMD is doing the smart thing and pricing them more in line with gaming cards instead of the pro versions. They will still be higher than the desktop parts, but not abusively so because they are aimed at a very price sensitive market, cloud gaming. These guys market to gamers, not to machines running CAD and design tools that cost more per seat than a nice car.

AMD’s pricing strategy is not just smart, it is aimed at the heart of a vulnerable target. Nvidia is pricing their Grid line at the high end of the spectrum like their other pro products, AMD is not. AMD can step in and not only help out their VAR community but undercut the competition by large margins. Unless Nvidia decides to change their pricing radically in the near future, Sky has a good chance of cleaning up in the cloud gaming sector.S|A