Viking makes a DIMM that can back itself up

Sometimes the coolest things you find are in places you don’t expect like Viking’s SASDIMM and NVDIMM at IDF. Neither were expected or mainstream but both could be very useful.

The first device is called the SASDIMM and it is exactly what it sounds like, a SAS12 SSD that fits in to a DDR3 DIMM slot. It looks just like a DIMM in every respect other than the SAS12 cable hanging off the side. The idea is very similar to their SATADIMM from a few years ago in that it just pulls power from the DIMM slot and all I/O is across the SAS cable. 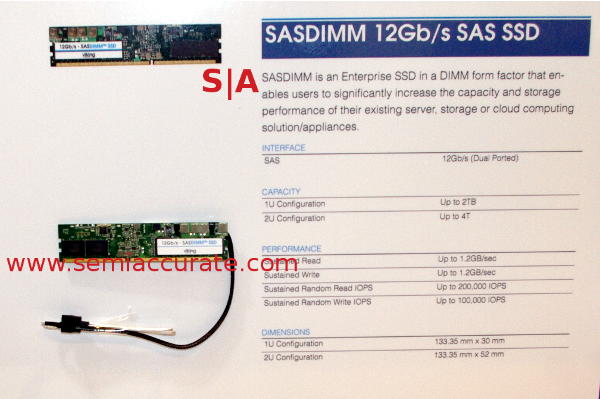 Since it uses SAS12 rather than SATA6 it transfers twice as fast and since it is a few years newer it comes in higher capacities. There are two version of the SASDIMM, a 30mm tall “1U” version that tops out at 2TB and a 52mm tall “2U” version that can hold up to 4TB. Both are rated at 1.2Gbps for R/W and 200K read IOPS and 100K write IOPS. Not bad for an extra DIMM socket that wouldn’t normally be used eh?

If SASDIMMs sound odd the next one will really make you scratch your head, a DIMM that doesn’t lose its contents when you pull the power. If you are thinking there was a big advance in MRAM at Everspin or some other technological leap, you would be wrong. In fact this NVDIMM called ArxCis-NV by Viking requires only the most trivial of changes to existing technology to run. All it needs is a trace run to the DIMMs slots to signal the DIMM that power just went down so it can back itself up. 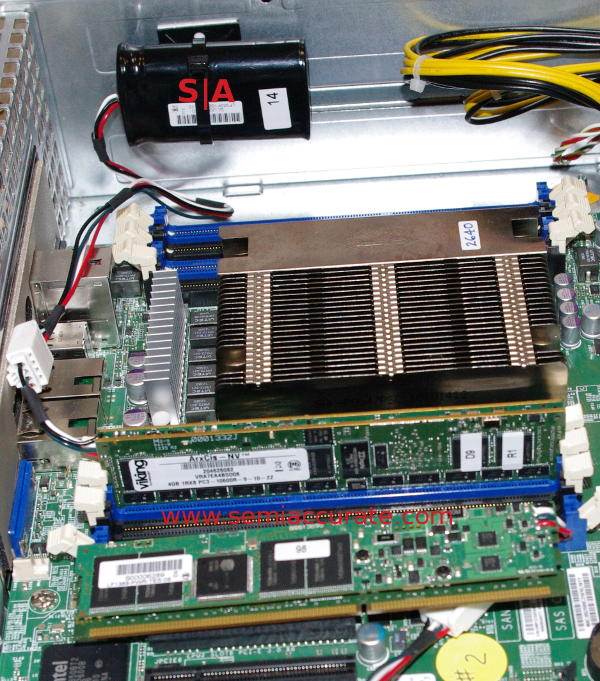 From the side it looks like a normal DIMM with an internal USB header cable coming off the side. A closer look shows that the cable is a power lead that runs to a big supercap and there is a second PCB stacked on the first one. This isn’t a normal 2-8GB DDR3/1333 DIMM by any means, it is a normal DIMM, power supply, and a second PCB containing a huge SSD strapped to the side.

When the power goes out, the (in this case) SuperMicro Romley PSU sends the “Oh Sh..” make that “Oh hi there!” message to the DIMMs and the dump memory to the SSD. The SuperCap is big enough to power the device for enough time to back everything up and shut down cleanly. The SSD is big enough to keep multiple checkpoints in memory so a write is not destructive, you can have multiple backups that were hopefully scheduled on a DIMM.

There is one other minor change that is needed for these NVDIMMs, you need a BIOS that is aware of them. The idea is that when you reboot after a power whoopsie you can go in to the BIOS and pick your restore point or none at all. It doesn’t take a genius to see how this capability would be astoundingly useful for many lines of work, you could even do some interesting things to circumvent long boot processes too, not to mention security related peace of mind.

Both the SASDIMM and ArxCis-NV could be very useful in the right systems and given the little or no work needed to deploy them, why not? Traditional NVDIMMs have some severe issues related to them, think rebooting right back to your BSOD, but the ArxCis-NV gets around those nicely with the BIOS and multiple copies. The SASDIMM is just more storage in tight environments but then again who doesn’t want a few more TB of 12Gbps SSDs in a system? I want a few of each.S|A