LSI extends Syncro to four nodes and beyond

AIS 2013: Unofficially it goes to 32-node failover, officially no comment

Last year LSI made Syncro an official product, this year at AIS they expanded it to four servers and beyond. Better yet the product is now available on real OSes, not just Windows so any added uptime isn’t clawed back by the OS itself.

If you are not familiar with Syncro, formerly called HA-DAS, it is a way to have servers fail over to each other via shared storage. Essentially SAS is the communications and synchronization route, and since the storage is shared externally, failover is both quick and reliable. The two initial problems, Windows and two-way server pools, have now been relegated to the dustbin of history.

The new 4-node Syncro isn’t completely finished yet, there is still a bit of polishing to do for performance. Currently if the master node fails, the failover nodes are a bit slower than they should be but this is a pretty minor loss. By the time it comes out in the near future this will be a non-issue, the cause is known and being ironed out. Systems as complex as Syncro are all about the details, ironing them out is both detail oriented and time-consuming work. 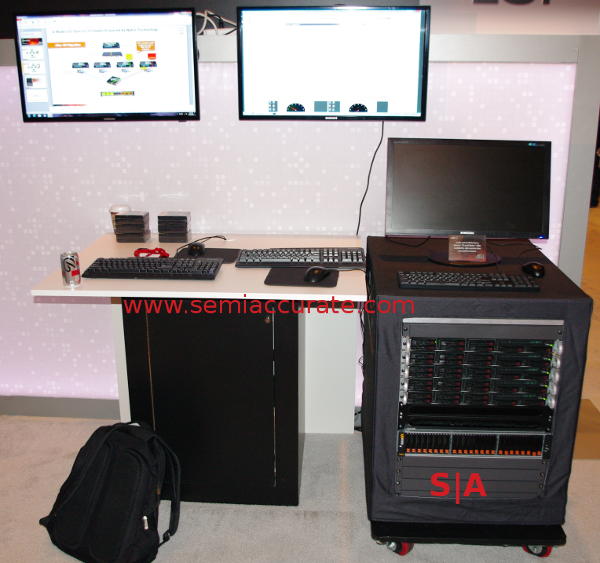 From here things get interesting. If you can go from two to four, how many nodes will Syncro scale to? How does 32 sound? Officially Syncro only goes up to four nodes but if you ask LSI engineers sweetly, bat your eyelashes a bit, and maybe toss in a bit of blackmail, they might let slip that 32-node Syncro will probably be a product in 2014. Since 2-way was launched at AIS 2012, 4-way at AIS 2013, one would be forgiven for guessing that 32-way could debut at AIS 2014. Unofficially it is still a work in progress, officially LSI only counts to four.

The one real problem that remains is write-through vs write-back caching. Currently Syncro 4+ will only do write-through caching, write-back is being worked on. Once this detail is ironed out, both the 4-node ceiling and the performance drop on migration should be a thing of the past. It won’t be long now until you can have 31 servers fail without downtime. That should meet the standard of ‘enough’.S|A

Editor’s note:  This is S|A management’s dream.  Unfortunately it will not solve issues with Xcel Energy nor with Comcast’s downtime issues.