CES 2014: From a clunky prototype to a sleek device in one year

Some of you might recall the Pentax/Ricoh 360 degree camera from CES 2013, it is now out and called the Theta. Aside from being a neat little device, the changes from the prototype give an interesting view of how a product evolves.

The idea behind the Ricoh Theta is quite simple, put two 180 degree spherical lenses on both sides of a camera and you can take 360 degree spherical images. Instead of a clunky camera with a motorized mount, stitching together many manually taken pictures, or other hoop jumping, Theta does it automatically. The 2013 prototype looked like this. 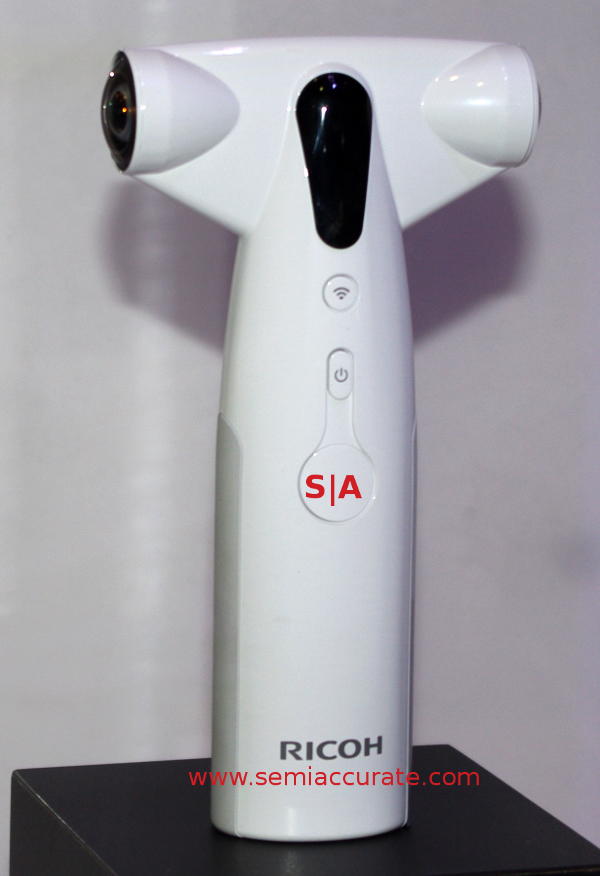 Step forward a year and the clunky prototype that looks more at home at that show after CES than CES itself is now a sleek and available product called the Theta. If you compare it to the iPhone next to it the dimensions are pretty similar other than thickness. The only thing you can say about the form factor that isn’t positive is those lenses look pretty vulnerable, I hope the Theta comes with a hard carrying case.

You can buy a Theta now for $399 or just peruse the image gallery on Tumblr for an idea about what can be done with it. The concept is easy enough to grasp, you put it down and trigger the shutter with a cell phone, either that or press a button manually. If you do the latter you will be awkwardly in the picture because it is a 360 degree view. That is a hint to hide behind something and trigger it remotely to avoid being a pioneer in a new form of selfies.

Getting back to that product evolution bit, notice that the old one looks like a cross between an adult oriented massager and a ball peen hammer while the new one looks like a cell phone? The important bit is not the shape or how some might assume it tries to fit in with the coffee shop set, look at the lenses. Other than being smaller and cheaper on the production Theta the important bit is that they are much closer together.

By moving the lenses from ~10cm apart to ~1cm apart the non-viewable area decreases drastically. Similarly the prototype had almost no part of the camera body viewable from the lenses while the new may have a bit but since the sides slope dramatically this will be minimal. If each lens is a bit more than 180 degrees in the viewing angle, the Theta will have nearly zero shadowed area.

Take a look at the Nutria picture here and scroll to the photographer’s hand. You can see a tiny sliver of the camera but mostly the image is perfect. If you follow the seam down through the bush and the water you can see some artifacts but unless you know to look for them it just looks like natural light banding. By the bottom of the bush there are obviously two images that the Theta is blending so that should give you a good idea of the viewing angles of the lenses. Any of our clever readers out there want to do the math and work out the viewing angles? The first to do so wins a gold-plated nothing, deluxe 360 edition.

Other than driving lot of cost out of the prototype, Ricoh made it more convenient to use with the new cell phone form factor. In addition images from the Theta now work with Google Maps and Google+ so there is an outlet to post your pics on that won’t disappear in short order. Better yet the new form factor decreased the shadowed area much more than I would have ever thought possible. While the Theta isn’t for everyone, it has a bunch of interesting uses at concerts, trade shows, and game/texture map creation. It is possible to do what Ricoh does via ‘traditional’ methods, Theta is vastly easier and cheaper than anything else we have seen.S|A