Coolchip Technologies turns a fan into a heatsink

CES 2015: Yes they spin the whole heatsink around

Coolchip Technologies was showing SemiAccurate a very, err, cool, CPU, err, cooler at CES. Instead of the fan on top of a heatsink spinning, Coolchip turns the fan into the heatsink and spins the whole thing.

The Coolchip cooler looks like a fan blade but it is in fact both a thin heat plate along with motor, bearings, and fan/heatsink device. There is no visible gap between the two main pieces, you can barely see any split between the two. Inside there are traditional bearings and a thin air gap that the fan rides on. It is quite interesting that the mechanism for conducting heat is the thin air gap itself but both mating surfaces have been treated to increase surface area. It looks like this. 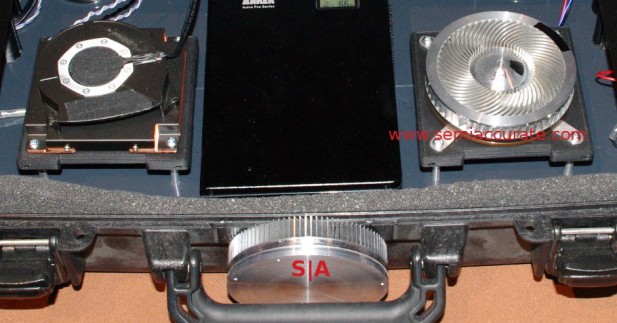 Traditional cooler on the left, Coolchip on the right

There are two different prototype coolers here but both do the same thing and both are 1U thick, about the same as a traditional ducted heatsink/fan. Coolchip is claiming around a 50% increase in cooling performance and about 30db less noise versus a traditional solution. The show floor was far too noisy to hear either one but the claim seems very plausible.

The first product you see from Coolchip will be a 1U cooler aimed at the enthusiast and gamer markets. It will be interesting to see how they compare to an oversized rig with multiple heat pipes for both performance and acoustics. More interesting is that it will be sold in partnership with Coolermaster, a company that understands this market well. Since they do the engineering and testing for traditional solutions in-house, this bodes well for Coolchip actually delivering on their promises. I guess we will see the result by Computex if not before, it looks quite interesting.S|A