CES 2015: Alienware Graphics Amplifier is a bit narrow in for and lanes

Dell’s Alienware was showing off an interesting PCIe connector at CES, something SemiAccurate didn’t know existed. While it didn’t live up to the initial non-Alienware made promises of 16 lanes, it does have some interesting potential.

The idea is not a new one, take a PCIe slot and put it on an external cable. Now you can have external PCIe devices for space and power constrained PCs like laptops. Think of it as the non-moronic way of doing Thunderbolt but without the cost or drawbacks of that failure. It all starts out with a cable that looks like this.

Yes that pretty little thing is my business card

What you are looking at is not AMD’s XGH 8-lane PCIe2 connector, it is Dell/Alienware’s own internally designed 4x PCIe3 connector. Ironically they both have the same net throughput due to generational differences and the Alienware version is a lot slimmer, but the concept is the same. Instead of the slim travel box to plug into it, you have a typical Alienware design on the chassis. 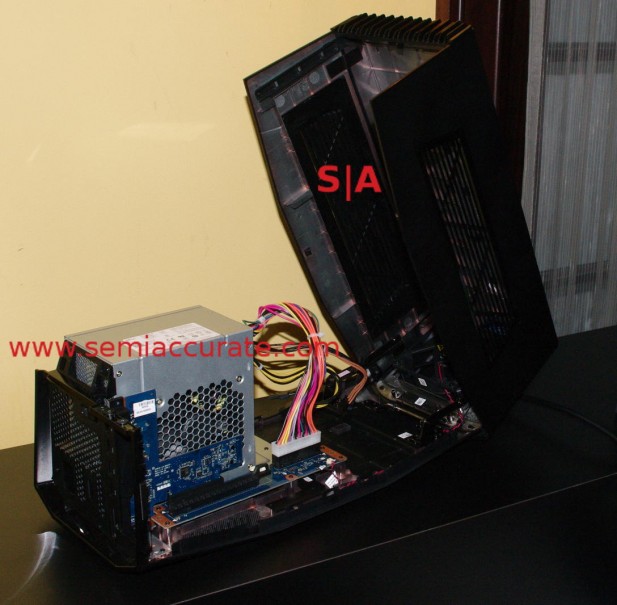 Plug-in any GPU here and you should have better graphics

The part you see above is called an Alienware Graphics Amplifier (AGA) but by itself it doesn’t do all that much. Until you plug-in any PCIe GPU it is just a box with an alien head logo, once you put in a GPU, off you go. It has a 460W PSU so you should be able to plug-in just about any modern GPU without a problem, it is hard to push that wattage in the real world.

Therein lies our problem with the AGA, the lane width. As we have said earlier, four PCIe3 lanes are not enough for a high-end GPU, they will throttle performance long before you reach the 460W limit of the PSU. We brought this up to Alienware and they denied it was a problem but, well, we don’t believe it. If you put in a low to mid-range GPU, not a problem but once you get into the high-end, elephant breathing through drinking straw time. Dual GPU cards? Right out. Until we get at least an 8x cable, the AGA is a band-aid, not a solution.

Other than that the AGA should be compatible with the Alienware 13, 15, and 17 laptops, this would be all three of their offerings. Not at all ironically they are all still Haswell based devices, it will be interesting to see what happens when the ‘big’ Broadwells come out. Do you want 4x external PCIe lanes or PCIe SSDs, pick one, not both.

In the end the AGA is an interesting step up for a power contained chassis but it doesn’t fix the fundamental problems that underly laptops and graphics. Until Alienware doubles the lane count, think long and hard about your use cases before you buy, an AGA is unlikely to be what you expect.S|A