On the APU front we finally see the début of the Carrizo-L core in the newly minted 7000 Series APUs. There are 12 new chips which will be out on May 10th so the wait won’t be long. Of these, seven are desktop oriented and come with unspecified clocks. AMD lowers the bar by only listing turbo bins in the press release, and we don’t dignify that by commenting on them they shouldn’t have done it. 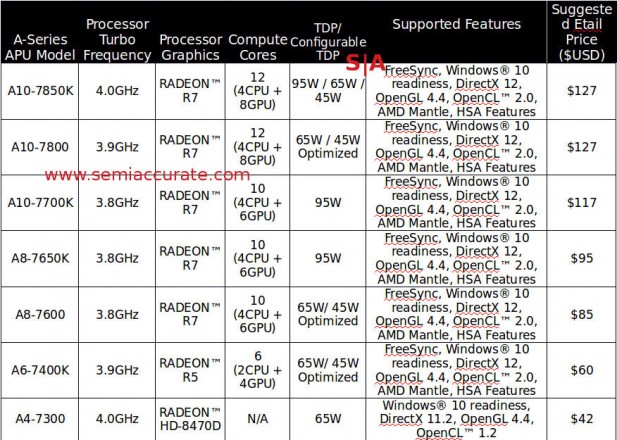 On the GPU side things range from 4-8 GPU cores (64 shaders per core) and CPUs range from 2-4. TDPs run from 45-95W or about what you expect from a modern desktop part. The price range is pretty good ranging from $42 to $127, for that money these would make a very slick media box.

For mobile there are only five new parts and again only max turbo is listed. This ranges from 1.5GHz to 2.5GHz so like the desktop, AMD is hiding the real numbers. Sad. CPU cores range from 2-4 but GPU capabilities are not specified. Power is listed from 10-25W but some parts have TDPs listed as a range for reasons we can’t explain. GPU frequencies are not listed either.

M300 and 300 are about all we can say about the new GPUs, other than that they are available now. AMD just launched them without specs, model names, or anything else. We could understand a little reticence if the launch was a bit away, but if you can buy them now… In any case those specs should be out soon, and hopefully they will be far less stretched than the CPU specs. With luck this release was a low point that will never be seen again. *HINT*.S|A