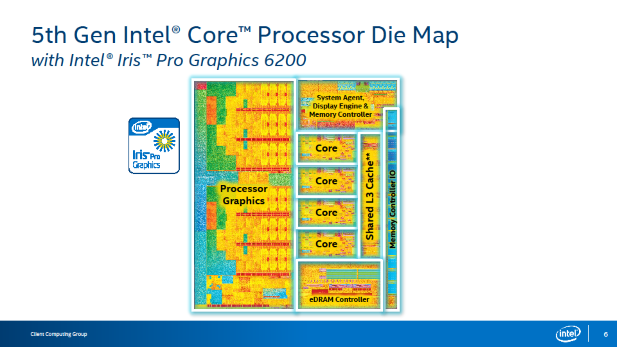 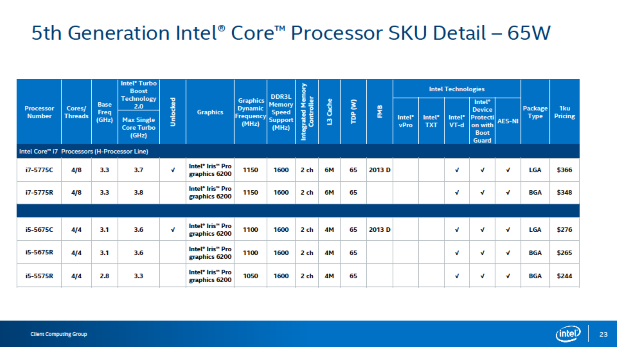 As others have detailed extensively Intel’s graphics architecture is designed to prize power-efficiency over all else. This differs from AMD and Nvidia which more often than not design their chips to attain the performance crown rather than the power efficiency crown. This is not to say that Nvidia’s Maxwell architecture and AMD’s GCN 1.3 aren’t very power efficient designs, they clearly are, but rather it’s to emphasize that Intel’s biggest concern is power efficiency above all else. 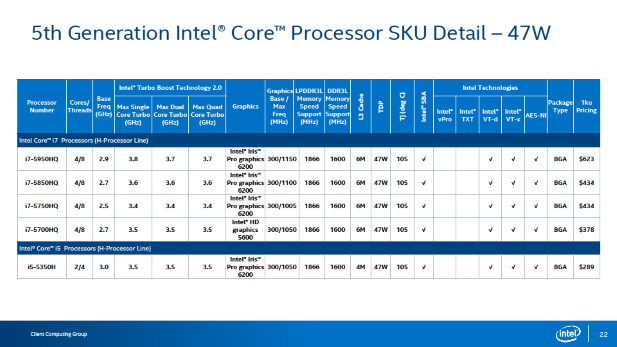 With that in mind it should come as no surprise that Intel’s new Broadwell chips sip power. The mobile chips equipped with Intel’s Iris Pro Graphics 6200 have a 47 Watt TDP and the desktop versions offer 65 Watt TDPs. Compare this to AMD’s top desktop APU A10-7850K which is rated for 95 Watts and appears to be handily beaten in graphics testing by Intel’s new chips.

For the last few iterations Intel seems to have settled on 6 MBs of cache as the right size for the L3 on its quad-core chips. These desktop and mobile performance Broadwell SKUs are no exception. Although Core i5 branded models only have 4 MBs of L3 cache enabled. Yay binning.

Both LGA packaged chips in this new line up, the Core i7-5775C and the Core i5-5675C, come from the fab with an unlocked clock multiplier. This is good news for overclockers that have been dreaming of getting their hand on with an L4 cache.

As far as pricing goes these ten chips are aimed at the performance segment and they are priced accordingly. The cheapest desktop SKU will go for $244 and the cheapest mobile SKU is $289. With that said Intel’s pricing for these new Broadwell chips isn’t out of line with its existing pricing structure. The socketed Broadwell parts command a $30 to $50 premium over the Haswell-based parts that they replace. 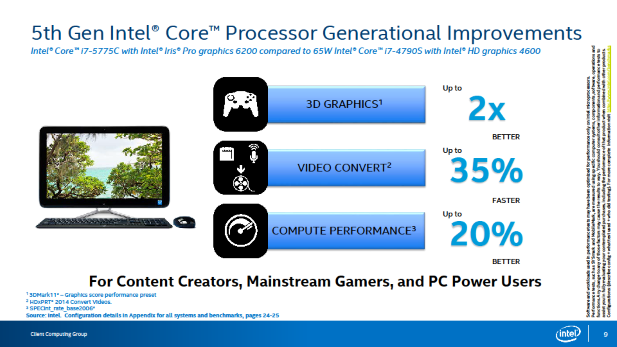 With no competition from AMD’s parts above the ~$230 price point Intel is only pricing constraint is its older Haswell chips. For now, there is a clear premium required when purchasing a Broadwell chip. Is there enough new goodness in Broadwell to justify the price bump? Of course that depends on your use case, but as interesting as these chips are we’d recommend holding off just a bit longer.S|A