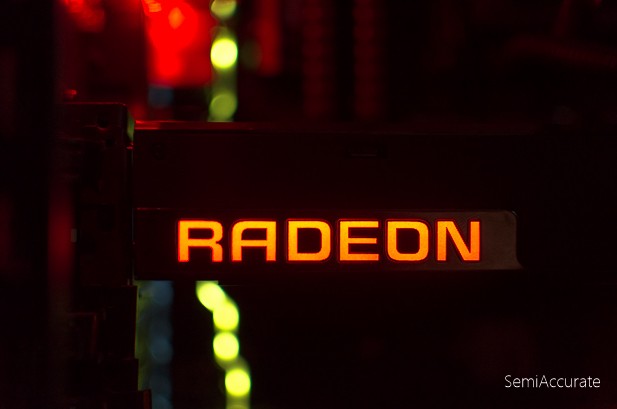 The most interesting software feature to arrive alongside the Fury X is what AMD calls Frame Rate. This is a panel baked into the catalyst control center that you can enable or disable with a checkbox and then configure using a slider to cap the maximum number of frames the Fury X will render on a per second basis. This slider allows you to choose FPS caps anywhere between 55 FPS and 95 FPS. The obvious use case for this is to limit the number of frames rendered to 60 FPS to match the 60 Hz refresh rates found on most monitors. This enables the PowerTune features of the Fury X to intermittently drop into their power saving modes because in many cases the full might of the Fury X is not required to drive a single 1080P display at 60 FPS.

On the other hand, if you have a newer monitor that supports 120 Hz or 144 Hz AMD’s Frame Rate will be of little use because the slider tops out at 95 FPS rather than 120 FPS or 144 FPS as would be necessary to use these monitors to their full potential. Additionally, if you are one of those people that prefer to see your full screen rendered content at a low frame rate of 48 FPS, 30 FPS, or 24 FPS you are out of luck because the bottom of the slide only goes down to 55 FPS. In effect AMD’s Frame Rate control is only useful to two groups of users at this moment. Those with 60 Hz displays and a those with rather rare 75 Hz displays. If you fall into either of those categories, then AMD has created a great new way for you to save on your electricity bill. If not, then you get a glimpse of a future where users can configure their GPUs to stop rendering frames that will never be displayed.

Another limitation of AMD’s Frame Rate control is API support. In our testing we found that only DirectX 11 and Mantle titles like Crysis and Sniper Elite 3 responded to this setting. While DirectX 9.0c titles like Counter-Strike: Global Offensive and OpenGL titles like Robot Roller-Derby Disco Dodgeball did not respond to the frame rate cap. 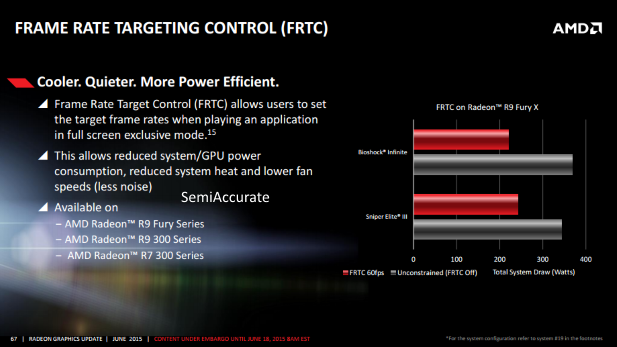 The power savings potential derived from this capability is immense. It’s interesting to see how this concept has evolved from a mobile-focused idea that AMD’s Richard Huddy discussed with me at IDF last year to a desktop GPU feature found on AMD’s halo graphic card. The potential for frame rate limiting is clear but I don’t think we’ll truly grasp at it until AMD’s Frame Rate panel includes a simple check box to limit the maximum rendering rate of the GPU to the refresh rate of the display it’s connected to. With that said, wouldn’t it be interesting if AMD’s next-gen mobile products used Frame Limiting by default to reduce power consumption and extend battery life in gaming scenarios? We think so.

Moving back to the test bench we wanted to get a handle on what degree of power savings we should expect from limiting our Fury X to producing just 60 FPS. To do so we re-ran our three Mantle titles in DirectX 11 mode with a Frame Rate cap of 60 FPS and used a Kill-o-watt to measure power consumption at the wall. This is not a direct measurement of the Fury X’s power consumption but rather an indirect measurement that looks at the power consumption of the whole system and contains a certain percentage of power supply inefficiency. With those caveats in mind let’s look at our results.

In games where frame rates are comfortably above our 60 FPS cap there are significant power savings. In Battlefield 4 our system draws almost half the power it did when it was unlimited. Coincidentally our Fury X drew just a hair over half as many frames per second in this game. In Sniper Elite 3 we saw of a power savings of 21 percent from drawing 16 percent less frames. Finally, in Civilizations Beyond Earth we find that frame limiting had little to no effect because even without the cap our Fury X was only drawing about 47 FPS.

All in all, these are pretty impressive results where we can see that framerates and power consumption scale in a sudo-linear fashion on the Fury X. Additionally there appears to be no downside to leaving frame rate limiting enabled even in games where our Fury X can’t hit that limit.

AMD’s Frame Rate limiting feature is a good first step. Its benefits are clear and its potential use cases are many. Now all it needs is a mobile implementation, the ability to default to the connected display’s refresh rate, and support for a wider range of caps.

With the Fury X and Frame Rate limiting AMD is offering users a choice: do you want the highest possible frame rate or do you want the same user experience with power savings to boot? We vote for the latter.S|A