Gigamacro has a unique imaging device, one that takes things inches across and captures them at microscopic detail. About the time you read this, the company should have posted the largest texture ever made at over a trillion pixels.

Technically speaking what Gigamacro does is called robotic scanning, taking a microscope and automating its image capture process. The physical mechanism, moving the camera around, focusing it, and panning it is the easy part, the hard bits are reassembling the results into a coherent picture. Lets take a look at how they accomplish this task of making insanely huge images. 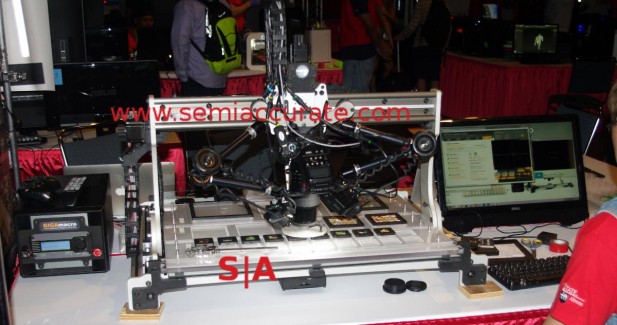 One rig to snap them all

As you can see from the image there are three parts to a Gigamacro installation, the device itself in the center, a workstation on the right, and a compute node on the left to crunch the numbers. At its heart is the robotic camera, a microscope really, mounted on actuators. You can set the X/Y coordinates, a high and low depth, and of course the resolution. The camera can image things down to a resolution of just under a micron or so, not too shabby.

The first interesting trick is that while the camera is focusable, Gigamacro does not actually focus it on the fly, they use a set focal plane. This of course means that anything 3D that is pictured could be partially in and partially out of focus depending on its depth. The Gigamacro software works around this by moving the camera up and down to take slices at each X/Y coordinate.

So if you are imaging a 1×1 inch thing at a resolution of about 1 micron, it not only has to pan around a lot, but it needs to take several pictures at each stop. This takes a long time. That one trillion pixel image had the pictures taken during the last Siggraph with the help of volunteers who made the 16 inch x 83 foot original. As you might guess taking multiple snaps at different heights of something that big with a microscope took all of the show.

What takes even longer is stitching the resultant images back together in X, Y, and Z dimensions. In the end however you get a texture with everything in focus regardless of its height or aspect ratio, computation photography matched up with brute force. Sometimes brute force works well, or at least automated repetition by something that can’t complain.

A few hours after this story is posted, that one trillion pixel image called Terabite should be posted on the company site. It is called Terabite because the original was made up of food. Yes last year the Siggraph volunteers made a 16″ x 186′ food mosaic that was automatically scanned with a microscope at a resolution of about 12K ppi. Crunching the numbers on the results took about a year which is why it is being revealed at Siggraph a year later. Better yet the Gigamacro guys said they hid ~50 easter eggs in those trillion pixels and are threatening to run a contest to find them all. Waldo was an amateur hack in comparison.

If you want to do trillion pixel wallpapers of your favorite whatever, Gigamacro would be more than happy to help you with that endeavor. The company sells the entire rig as a turnkey solution complete with training and support for only $48,000. After it is set up and the learning curve scaled for you, what you do from there is up in the air. If you don’t have any ideas, check out some of the metallic beetles in their gallery, it is like Google Earth with shiny things.S|A