A New Way of Thinking with AMD’s R9 Fury Nano

To make something small, you have to think big… 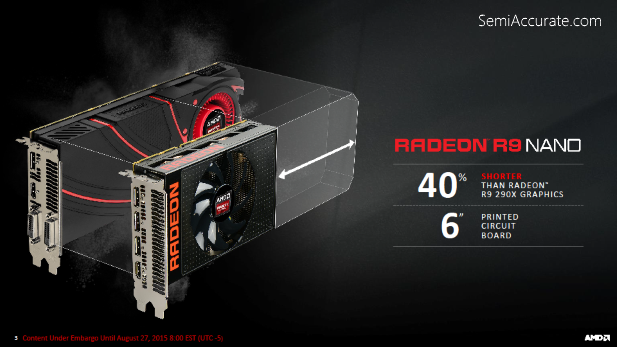 Traditionally the best graphics card on the market is the graphics card with the highest performance per dollar ratio. Secondary to this consideration were metrics like performance per watt, size, total power required, overclocking potential, attractiveness, and driver support in no specific order.

Unlike low-end or mid-range offerings Flagship GPUs have always been about one thing: offering the highest absolute performance level possible; power consumption, cooling, and size be damned. We’ve seen this over the years with products like the GTX 480, the HD 7970 Ghz Edition, and more recently the Titan X. 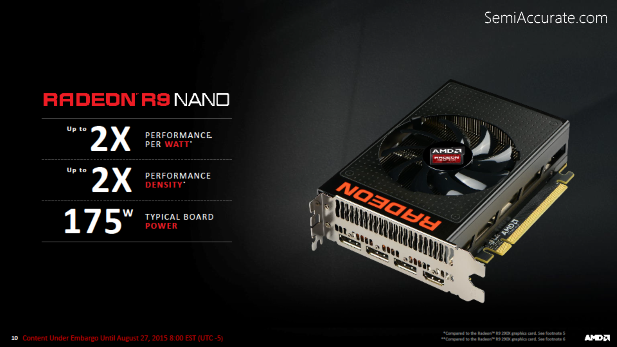 But with the R9 Fury Nano AMD is trying something different. It’s taking the best bin of its massive GCN 1.3 equipped Fiji chips and instead of tuning and configuring them for absolute performance they’ve opted for a different path. Instead of creating a brutal monster of a GPU like the R9 Fury X or the R9 290X they’ve looked at the performance per watt scaling curve on their Fiji GPU and created a product that pegs that curve in the knee to deliver the most efficient Fiji-based product possible. 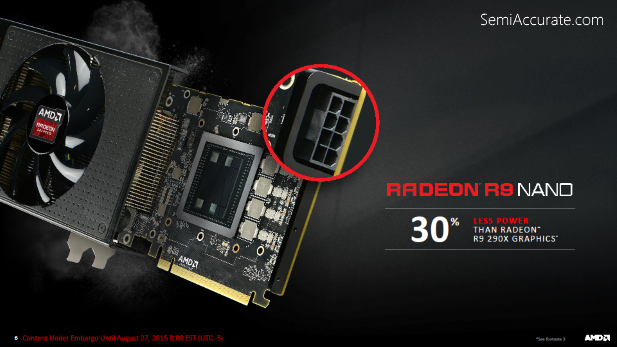 First off, size. Unlike the nearly foot-long R9 290X the R9 Fury Nano is only six inches’ long. It’s still a dual slot GPU, but it’s certainly not a giant brick like most high-end GPUs. It also requires only a single eight-pin PCI-E power connector, rather than the pair of eight-pin connectors present on the R9 Fury X. 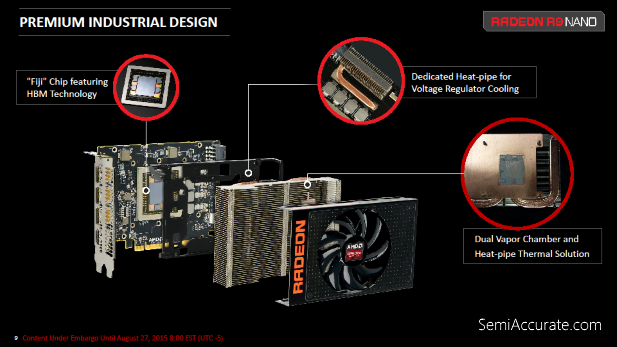 It’s got a sturdy vapor chamber cooler on it with a heat pipe dedicated to cooling just the VRMs and a single fan with an open air-flow design. According to AMD in a case with a positive air pressure setup, ninety percent of the heat coming off of this card will flow out it’s back bracket thanks to its horizontally oriented cooling fins.

With the R9 Fury Nano AMD has taken all of the goodness that would usually be reserved for a dual-GPU monster card and effectively halved it. There by producing a product that is without question the best in its admittedly almost non-existent class. If innovation in the graphics card market is what you’ve been waiting for then this is it. AMD’s R9 Fury Nano is small, powerful, and highly efficient. 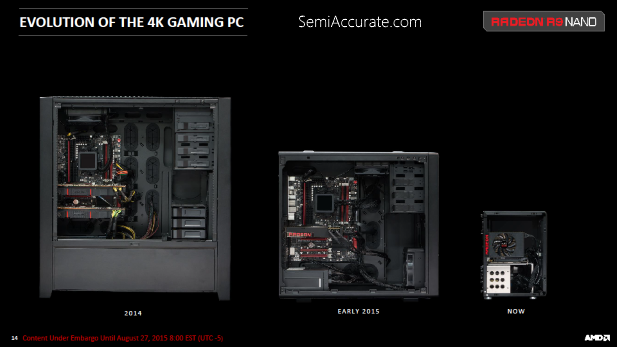 This is the future of PC gaming, not giant ATX towers with kilowatt power supplies. Compactness, efficiency, and quietness are now the key metrics by which graphics cards will be measured. With the R9 Fury Nano AMD is set to nail all three of those metrics. The longer I think about this card the harder I’m finding it to not be impressed with what AMD’s created.S|A