Intel goes back to developer roots at IDF

IDF 2015: A turn for the better despite what some may say

Intel did something unexpected during IDF, brought it mostly back to its roots as a real developer forum. In short there was a lot of tech and SemiAccurate sees the 180 degree turn in form as unquestionably in the right direction.

While there were some grumbles that stories weren’t handed out wrapped in a bow for mainstream press, and there were no big silicon announcements, there was a lot of actual content at the show. Even the first keynote may not have been stunning but there was actual content to talk about and more shockingly things developers care about. Most of this was between the lines and you had to understand what was being shown off to get it, but it is a show for developers, right?

The theme of the keynote was there are three assumptions about the next gen of computing, “sensification”, “smart and connected”, and “extension of you”. This is the long way of saying Intel has serious phone envy but we know that already. The sensification bit is putting sensors connected to the sensor hub in Skylake, Intel’s Realsense 3D camera was front and center there. The idea is to make a PC aware of its surroundings in more and varied ways.

Better yet Windows 10 plays a huge part in this, you know the OS where you can’t turn off the spyware even if you try. SemiAccurate can see the advantage of sensors but only as long as the owner is in full and absolute control of them. With Windows 10 there is no question that the user is not in control, can’t stop the privacy abuse, and it is only going to get worse with more sensors. Intel really needs to act on this quickly and decisively before the whole well is poisoned if it isn’t already.

That problem extends to the “smart and connected” meme too. The only thing worse than an always listening always seeing device is one that you can’t stop from phoning home. For some reason this feature is being sold as always updated email with no talk of what goes the other way. Put an external network scanner on your new Windows X box and be afraid of the new advances.

Last up is the “extension of you” theme, in short your PC becomes personalized and disappears. This seems to be a more hit and miss proposition because I for one want my laptop to be seen and be big enough to actually use. I may want my wearables and comms devices to be transparent and go unnoticed but not my PC. That is a tool that is meant to be used, when I am woodworking I don’t want an unobtrusive hammer, but I do want a keyboard big enough to not cramp my hands.

To go about these things there were several potentially interesting bits of possible tech stuck in Skylake. We say possible and potential because even at the architecture briefs, other than the truly excellent graphics one, there wasn’t much actual tech discussed. That said one of the big bits in Skylake is dropping audio latency most likely through the sensor hub in Skylake.

This hub will allow the always on/wake on voice functions in the usual method, a low power dedicated DSP. Once this low sample rate device detects its trigger, it wakes up a more powerful block that does the heavy lifting. Between the two of them you can achieve the low power and high performance needed to do the job. This is pretty obviously a feature shoved down Intel’s throat by Microsoft in an attempt to copy Google and Apple but it may actually have real world uses one day. Be afraid of this until you can turn it off in hardware if you run an MS OS, really.

Another sensor based device was the next Google Tango, it now runs an Intel Realsense camera. While this is undoubtedly a big step up from the last version, I honestly don’t see the point of a 3D scanner in a device yet. During the first few days of ownership you will scan your house, pets, spouse, and things in the yard that can’t run away fast enough. Then what? In a niche market it can be a killer device but not for the general case, or at least not for a long long time. [Editor’s note:  I disagree.  Small manufacturing and prototyping for 3D printing will find a 3D scanner useful.  Small machine parts that are no longer made could be scanned and sent to CAD for ‘repair’ of the worn pieces and then machined in a fairly quick and inexpensive process keeping a 80 year old machine in service, for example.]  The Tango was notably not shown off as having an Intel CPU though, that absence spoke volumes. That is kind of a let down, the current crop of Intel Atom’s are actually decent devices that would be fun to play with.

In a more practical form factor, Intel showed off the Realsense camera in a Razer USB module, a nice use of the silicon. Think of the classic webcam with Razer styling, Intel engineering, and one more dimension than usual. Before you have visions of the silly Youtube D-grade celebrities doing silly things, this one has a real use, one in gaming no less.

That use was shown off in the iRacing sim with Realsense tracking your head and changing the views on the screen as you moved your helmeted melon. If you leaned, the screen reacted as if you were really leaning, look up it looks up, etc etc. While this is nothing a 2D camera and a lot of CPU time could not accomplish, it is quite a bit more seamless with a 3D camera. If you are a real racing enthusiast, check it out. For everyone else, there should be 2-3 more compatible demo games released with the hardware, maybe. Honestly I hope this catches on, it really could be a good thing.

For smart and connected we come to the EPID or Enhanced Privacy ID. This is nothing more than Mcafee password stores bundled with Windows-only apps. Think of a easily jimmied lock box bolted onto a piece of Swiss cheese, what could go wrong? Better yet you get 15 free passwords then it charges you for more, kind of like the 83 million free password managers out there but more expensive.

Moving back to hardware and the “extension of you theme”, Intel actually talked about the Curie platform. This is a real SoC with a Quark CPU, BTLE radio, sensors, and Wi-Fi. In short it everything you wanted in a 486 plus Pentium op codes and radios. It looks fairly well thought out but that may just be the scant details released talking.

Curie is obviously aimed at the ARM SoC world and it attempts to woo developers with the familiarity of x86. Unfortunately Intel is not releasing any documentation, pricing, or needed info about Curie so it is hard to line it up to the incumbent ARM SoCs. If the prior Quark based SoCs are any indication, Curie is going to be priced too high by a significant multiple so lets hope we are wrong here. In any case having a potential real competitor out there is a good thing as long as power draw is not out of line. Again. 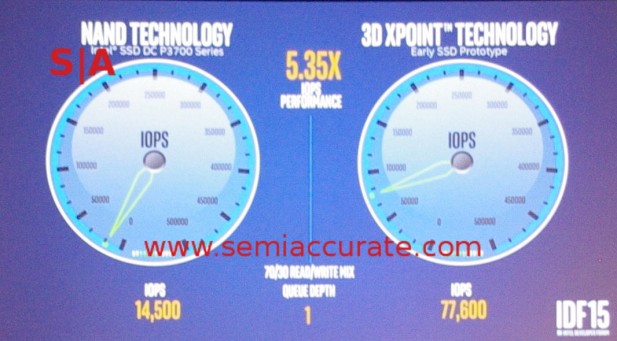 Remember that this is only a rough prototype

Last up was even more tech, the first demo of the Intel 3D Crosspoint memory. If you don’t think Crosspoint is a fundamental game-changing technology leap, you simply don’t understand what it is. The demo at IDF showed one aspect of its performance, speed. As you can see above an early prototype SSD based on Crosspoint trounced an Intel DC P3700 SSD in IOPS. Given how fast that flash-based device is, Crosspoint really is in a different class.

As hinted at during the unveiling, Crosspoint is going to be closer to DRAM than flash in most metrics, price included. During a later keynote, Intel claimed it would have up to 4x the density of DRAM, less than we were expecting, and cost half as much, about what we were expecting. About the only bad thing you can say about Crosspoint is that Intel is now calling it “Intel Optane Technology”, a term we will only repeat with mocking scorn from here on out. It is Crosspoint, Optane is just dumb.

In the end the first keynote of IDF 2015 was a refreshing step in the right direction. Despite the silly marketing bits there was actually a lot for developers to care about at the show. There wasn’t much sugar-coated shiny things for the press, just a lot of smaller bits that brought the show back to its roots. With luck this direction is a permanent change and things will move farther away from pointless entertainment and back to cool tech. We will know next year but things are looking way up so far.S|A