A few new details and a lot of support

Yesterday the HSA foundation put out a few more tidbits on tech and partners. SemiAccurate thinks a few of these are quite interesting so sit back and enjoy the technical minutia.

Some of you might recall that in June when AMD announced Carizzo there was some waffling around its HSA compliance. There was a good reason for this, mainly that the compliance tests weren’t actually done so they couldn’t be run yet. That is fair enough and as of last week, AMD said they passed the current compliance tests but the HSA board hasn’t gotten through the certification process. It may have been announced that Carizzo is now HSA 1.0 certified but AMD messaging will probably hide that fact well.

Luckily there was a host of other hardware and IP vendors chiming in with news of their offerings. ARM was the first out of the gate with the news that the Cortex-A72, Mali-T880, CCI-500, and CCN family are all HSA friendly components. Those are our words, there isn’t a clean way to say that these IP blocks will not inherently screw up an HSA implementation but an implementor can do so on their own with said blocks. Or something like that. In any case, the majority of ARM offerings for this class of devices will allow you to build an HSA compatible device if you want to.

Roadmap without much detail

Mediatek was the next to chime in about their offerings with the picture above. While it isn’t exactly a detailed technical roadmap, it does strongly hint that their offerings next year will be HSA compliant. Better yet it also puts quite a bit more emphasis on the memory fabric and accelerators, it will be interesting to see how much of this is Mediatek generated IP. 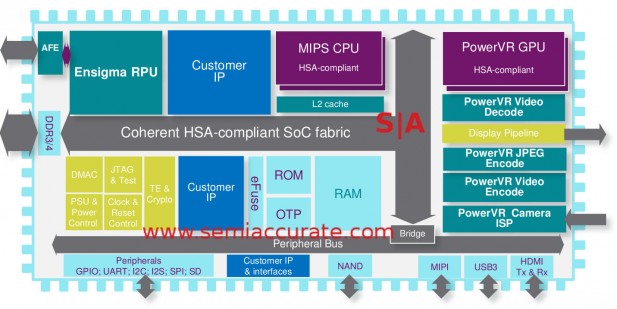 Imagination is in the game too

Imagination then stepped up to the plate with what is probably the most significant new bit of hardware news, MIPS CPUs and PowerVR GPUs are going to be HSA compliant. This will happen in a “Staged roll-out from 2016 onwards” so you can expect it to be shown off early next year. The chip above is probably the successor to one that made its debut at CES 2015 so you can do the rest of the math..

During SemiAccurate’s conversation with the HSA Foundation, three interesting technical tidbits came up. The first was about non-CPU/GPU units and if they could also be HSA compliant. Several HSA slides had DSPs and NICs listed as blocks but they were de-emphasized compared to the two main types of logic. The short answer to the inclusion of other blocks is yes they can be HSA compliant and NICs are a much better candidate in the near term than DSPs because DSPs typically lack a lot of the control structures needed for HSA. Most IP blocks could probably be pulled in and made compliant but the real question is if there is a need to do so.

Next up is a little more obscure and that is byte ordering between big-endian and little-endian systems. HSA has a software layer that will swizzle bits where needed but there doesn’t seem to be a standard for the bytes themselves. Should they be re-ordered as well as their bits reversed in an endian-ness change or should only the bits be reversed and the bytes stay where they are? Given the potential number of IP blocks that can make up an HSA device, this isn’t a minor concern but it is not an immediate one. By the time the hardware comes out that forces an answer, I suspect there will be one in place.

That brings us to the last part, testing software. There is obviously a set of compliance tests, AMD is using them now. There are also quite a few tools for debugging HSA code on various platforms but that tends to vary by the platform itself. One thing that isn’t in place yet is an HSA debugger that can work on the bytecode when separated from a platform that runs it. In other words at the moment you can debug HSA code X on platform Y with tools specific to Y but there is no way to debug or simulate X’s bytecode without bringing a specific set of hardware and it’s quirks into the picture. While we are not sure if this is needed although it does seem like a nice thing to have when picking apart those nasty low-level headaches.

In short the HSA foundation is banging the drum on their new offering, one bit of hardware ‘done’ and several more in the pipeline. With support from AMD, ARM, Imagination, Mediatek, and a bunch of others, the future looks pretty solid for the standard. Add in a growing number of tools, compilers, and language front ends and you have the makings of an ecosystem. It’s been a while in the making but I think we can say FSA/HSA is finally here.S|A