Along with the curse of social media and apps

AMD just released a new version of their drivers, Radeon Adrenaline. There is a lot of good here, especially on the Pro side but SemiAccurate just doesn’t get the social media bent.

Lets start out with the good, the first thing we noticed is that Adrenaline has Linux drivers shipping with the launch drivers. This is good. Better yet you can choose between the open and closed, Pro and consumer, all in the same software suite. This is really good, closed source bothers some, but not this author, so the choice is great. We would love to tell you how it works but due to travel schedules the nearest compatible card is ~1500 miles away. Maybe in a few weeks.

The next biggest bang is on the virtualization front, an incredibly important piece of the Pro puzzle. We first told you about it over a year ago with the S7150 GPUs and now AMD takes another step forward. Based on their MxGPU tech we now have open sourced GIM or Guest Interface Manager. It is an open-source KVM driver for for the host OS aimed at the providers. (Note: We can’t find a direct link to it at the time of writing) Don’t underestimate this, it is huge for hosting and virtualization not to mention VDI. Having a fully hardware accelerated GPU is a killer in this space.

On the ProRender side the biggest bit to catch our eye was an importer for game engines or in this case game engine. You can now suck Solidworks projects into Unreal Engine directly which should save a bit of time and annoyance for developers. This seems more aimed at the non-game users of Unreal Engine, a huge space that most don’t realize exists. In any case, frictionless imports is a good thing that hopefully grows to include many more platforms on both sides.

Last up on the Pro side is a promise to update the drivers on a quarterly basis, specifically the second Wednesday of the second month, presumably of the quarter. Like most hard release schedules, SemiAccurate will take this with a grain of salt because development is hard, complex, and rarely meets arbitrary time schedules. That said we think AMD will come really close to meeting this so good luck guys. Something something full of woe. :)

Moving on the the consumer side we get the usual performance gains. What is interesting about the above two slides is not the double digit performance gains in existing hardware and software over the last year but the latency side of things. AMD is now paying attention, or at least publicly calling out latency. Taking ~4ms of latency or more out of a game’s response time is a good thing, it will lower frustration and player annoyance at software even if they don’t know it is happening. The more of this type of optimization the better.

Other features added in Adrenaline include target frame rate control for Vulkan, borderless windowed support for multi-GPU, and compute vs graphics profiles for coin miners. This last one is said to boost etherium mining by ~15% on an RX570 which should please a lot of the coin mining set.

On a more visible user facing front we have enhanced sync which has been around for a while now. New in Adrenaline is that it moves to all GCN based GPUs to start out with, a pleasant surprise for those with older cards in their machines. Add to that Vulkan support, notebook support, and multi-GPU support. Eyefinity is now able to use the tech as well, another boon for the multi-monitor set.

This is where we move to the stuff that SemiAccurate finds, well, lets just say not mission critical. Yes we mean UI addons, social media, and *GASP* phone apps. Call us Luddites, call us old school, but social media and phone apps are not useful to the core mission of a gaming card. Sure you might base your entire identity and ego on streaming your trolling sessions but seeing what this has done to gaming, it is something we would rather have not exist. Games are no longer games and social media ties and streaming are a big cause.

With that in mind AMD has added a host of social media functions to their drivers and put streaming front and center. Combined with an overlay you can stream, post, and annoy your contacts with things they really don’t care about in many new ways. If you think your grandmother cares about your latest Doom frag, you are wrong. Really. But you can now organize all your clips and screenshots in the AMD driver, yay?

On the technical side there are two interesting aspects of this, borderless region capture support and chroma key. Both are useful tech as long as they work in non-gaming apps which we assume they will. Throw in multi-monitor capture and you have an interesting feature set for businesses. On top of that you can separate out audio tracks for streaming, another useful thing for things like conference calls. All of this can be used for social media and streaming games too don’t forget, but if you haven’t gotten the point yet, please continue, your worth really is tied up in your like count.

Another big bang is the overlay, something AMD has desperately needed for years now. While we are tempted to say it brings the goodness of the Windows 8/10 UI to gaming, we won’t. It does allow useful features to be accessed with a single keystroke that doesn’t interrupt the game. Until we get a chance to play with it, we won’t give it a thumbs up but on paper it is a good idea. 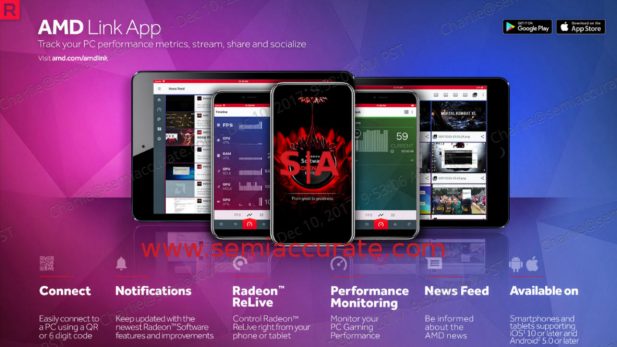 The future is a low IQ one

The last big bang is one we were not expecting, an iPhone and Andriod app for controlling your GPU called AMD Link. You can link up to your PC with a QR code or by manually entering the information needed. If this works with an external proxy it may work well until AMD gives up on running the proxy, if not it will be a massive support pain explaining NAT traversal nuance to skiddies. In any case we will give this feature a hearty, “Didn’t you have anything better to do?”.

Overall the new Radeon Adrenaline looks like a solid advance on the Pro side and quite decent on the consumer front. Overlay and added features are welcome, especially the fleshing out of existing features to include new APIs and use cases. The performance gains look solid too and the attention to latency is quite welcome. As for the social media… well if you like that kind of thing, enjoy. If you haven’t caught on by now, we don’t. That said there is more than enough to like in AMD’s Adrenaline update, go download two copies just because.S|A