XDF 2018: If you need high powered compute, it is here

At Xilinx XDF 2018, Nallatech/Bittware was showing off some liquid cooled FPGA boards for those who need really high performance compute. The XUPVV4 and XUPVVP are about as high performance as you can get on a single PCIe card.

The two cards that caught our eye were the XUPVV4 liquid cooled, 4-DIMM/memory channel high end FPGA pictured below and the even more insane XUPVVP 2-DIMM/memory channel board. Why is a two channel device more extreme? Imagine the XUPVV4 with the top two DIMMs removed and replaced by an entire row of power circuitry. Slap a water cooling loop on them too and pump ~300A of current at .85v through it all. 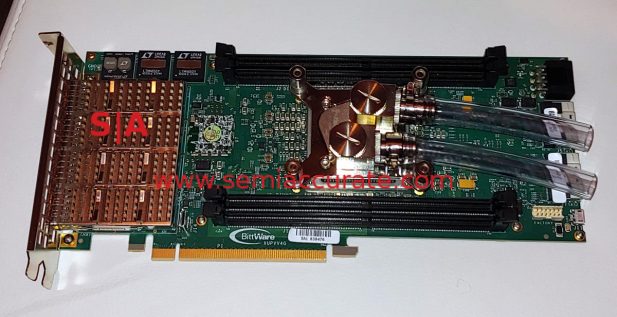 The idea is an old one, more power for more performance. Nearly 300W should do the trick when it runs it’s course through a Xilinx Ultrascale+ VU13P FPGA. Throw in four QSFP cages supporting 100GbE each and you have a pretty impressive device for sucking in data, tweaking it, and pushing it back out with minimal latency. If it isn’t enough power for you, well you will have to wait until the next generation parts come out.

Should the bandwidth of four DIMM channels be insufficient for your needs, you might want to look at the VU37P with the Xilinx Ultrascale+ VU13P, HBM2, plus two DIMM slots for extra capacity. This should give you enough bandwidth and spillover capacity to meet most users’ needs. This one supports the same 4x QSFP and adds up to four more with an adapter. Once again if this isn’t enough, see the above about waiting for the next generation.S|A