Supercomputing ’19: OneAPI is the real star of the day

Intel has three new updates for Supercomputing on CPU, GPU, and software. SemiAccurate thinks the GPU will grab the headlines, the CPU will dig a small hole, and the OneAPI software will be the standout.

On the news front the obvious winner is Ponte Vecchio, the new GPU based on the much hyped Xe architecture. It is a 7nm family of devices said to be based on one architecture with many different microarchitectures. As you can see in the slide below, the level of detail given out says that it uses face to face stacking (Foveros) likely for cache, sports CXL (Xe Link for branding), is tightly coupled in multi-chip configurations, and uses EMIB bridges (not pictured). 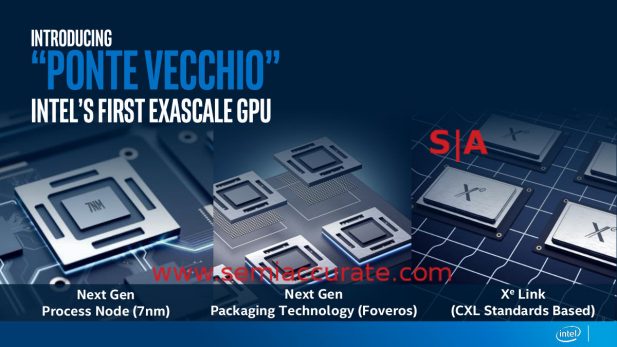 What makes Ponte Vecchio so interesting is the bit about multiple microarchitectures. To us this says there will be one interface with a multitude of different implementations each focused on a specific use case. If you are thinking, “You mean like the big vs small Nvidia GPUs only not done in a half-hearted way?”, you are on the right track.

The consumer GPUs will be heavy on graphics bits and lighter on DP/AI features while the data center variants will have more of an emphasis on compute and connectivity. This will allow Intel to apply the right resources to the right task while not breaking the software. If we are speculating correctly here, it is a really good idea and one that Nvidia will have to follow. It is also a very expensive idea, one that you won’t undertake unless you are pretty sure the sales volumes will be there to amortize the cost over. 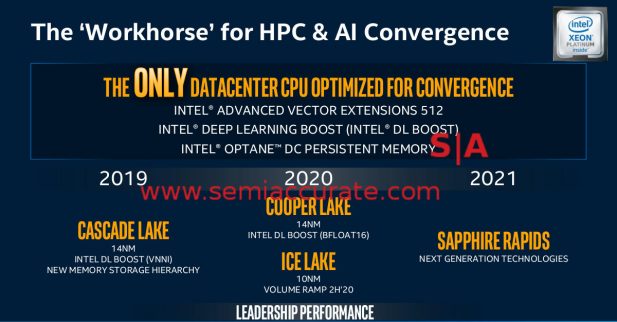 The Roadmap in no detail

On the CPU side we have a much tamer announcement, basically the name Sapphire Rapids, a name we got slightly wrong when we exclusively told you about it two and a half years ago. Why are we down on the CPU side? Look at the slide above, specifically the 2020 column with Cooper Lake and Ice Lake. Notice the bit about BFloat16 on Cooper? This is a good thing, no questions there, and Intel has been pimping the whole AI functions angle pretty hard for a while now.

The problem is that while Cooper has BFloat16, Ice Lake does not. If you look at the slide above, it is important enough for Intel to call it out on Cooper but they won’t point out that it goes away later. This sets up a false set of expectations for customers and onlookers which is entirely the point. Intel is digging a hole here that will take a lot more to get out of then the benefits they get from it. In short SemiAccurate feels self-inflicted wounds like this are stupid and should be avoided but Intel won’t. Other than that, the roadmap is what it is, officially acknowledging the name Sapphire Rapids.

OneAPI has a distinct place

If you look at the above slide, the box that says OneAPI said, “Languages & Libraries” on the prior slide so you know what Intel is trying to replace. Instead of multiple libraries for multiple languages, some available for a wide variety of hardware, others not, Intel hopes you will use OneAPI instead. In theory it will do the same jobs as the languages and libraries but be constant across multiple types of hardware.

Normally SemiAccurate would not be all that interested in a proprietary interface that is tied to Intel hardware but this one is different, it is open. Intel is promising that OneAPI will be an open specification, something that should ease a lot of concerns among potential users. We are cautiously optimistic that Intel will do the right thing here, if they don’t OneAPI will have all the uptake of the other 73 million vendor specific ‘open’ software stacks out there, IE forgotten when Intel stops funding it.

If it works, and SemiAccurate hopes it does, it could be a really good thing for the industry and promote the use of the right hardware for the right job. If there isn’t the right bit for your code or algorithm, there is the box called “Level Zero” at the bottom, basically a direct hardware interface for those that want or need it. Low level programming is a good thing if you are willing to put in the immense effort to do it and Intel is wisely not trying to close that door for their hardware.

While OneAPI will be an Intel product, Intel strongly hinted that there are third parties that will be doing plugins or modules for the layer. This makes sense in that if Intel wants you to use their interface, they also want to encourage non-Intel hardware to work as seamlessly as possible with it, that will only sell more Xeons.

Intel is probably never going to write direct support for Nvidia GPUs for example and Nvidia is unlikely to ever write a plugin for OneAPI, but that would be the end goal. Instead Intel has a handy conversion tool to go from Cuda to DPC++ along with a set of debuggers and analysis tools. It will be interesting to see who jumps aboard first on the hardware side but in theory, if everything is really open, OneAPI is a really good idea. 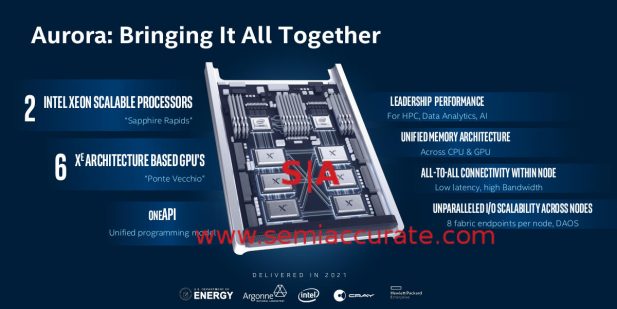 Last up is the bit that brings it all together and likely prompted most of the name disclosure for today, Aurora. This is Intel’s big supercomputer win in the upcoming generation that combines two Sapphire Rapids CPUs, six Ponte Vecchio GPUs, and is coded for with OneAPI. Doesn’t that wrap it all together nicely? If you think so, the Intel people will probably thank you for getting the point. As long as Intel delivers on OneAPI it should make extracting performance from a heterogeneous supercomputer a lot more accessible.S|A