Updated: Think 9-Series with 1 added to the number

Today Intel is launching the 5th rebrand of Skylake mobile called the 10-series mobile -H aka Comet Lake. SemiAccurate doesn’t see anything worth bothering with here but on with the show.

Lets start out with the good, we have a new model name to talk about! Six of them actually, with the top line i9-10980HK running at a top turbo clock of, wait for it, 5.3GHz(*)! Memory speeds go up too and Intel is touting all sorts of advantages like Optane, unlocked CPUs, Turbo Boost (Max no less) 3.0, and more. The entire list of specs looks like this. 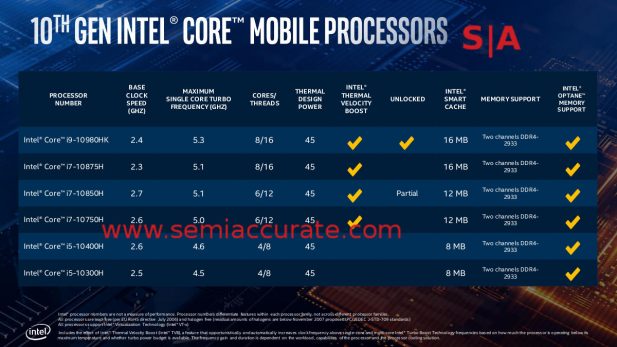 Now back to the real world, lets start out with looking closely at the unwarranted but breathless spin starting out with the (*) above. 5.3GHz sounds great doesn’t it? Until you stop and think about it and look at the details, most of which Intel refused to provide. The last generation i9-9980HK ran at 2.4/5.0GHz base/peak turbo so at best this part is 6% (5.3 / 5 = 1.06) faster. And that is for peak turbo with a PL2 of 135W _AND_ has the OEM putting the effort into Intel’s ‘Thermal Velocity Boost’ while running crazy amps across the board in a mobile form factor. If you don’t do that, and basically no one will, the 10980HK runs at 5.1GHz peak turbo or 2% faster. Stunning advances on this one, eh?

The rest of the ‘benefits’ are marginal, some like upgrading DDR4 from -2666 to -2933 will provide a little bump for users, but the palpably desperate push for ‘Optane’ is a vast regression on energy use. It is too hot and pointless to use in a mobile form factor but it is expensive. Turbo Boost Max 3.0 is similarly overhyped, you can now boost two cores to the top frequency which seems to be a response to what Microsoft forced, not what Intel wanted to do. In any case as we discussed above, you will almost never see those last 200MHz in the real world, but that is nowhere in the presentation. (Note: We asked Intel for the turbo tables for these parts but they refused to disclose that basic information. The one bit they did provide is that the all-core turbo frequency for the 10980HK is 4.4GHz.)

That brings us to the last bit, unlocking. To their credit, Intel was responsible for making overclocking and related hobbies a thing, but that was decades ago. Since then they have progressively neutered it and tried to sell back those intentionally removed features to users at an exorbitant price. They progressively and myopically destroyed the culture and refuse to take even minor steps to rectify the problem. The -H series is a painful example of this.

What we mean is if you look at the ‘unlocked’ column above there are two unlocked parts, the 10980HK and the 10850H, but only ‘partial’ on that last one. You might not have noticed earlier in the week but AMD launches their ‘Renoir’ based 4900HK mobile parts that absolutely destroy anything Intel has to offer. Beware of painful, intrusive crushing ads and obnoxious autoplay videos for this link, but Tom’s Hardware shows just how badly Intel is beaten like a drum in this segment now.

Intel’s response is to let the bean counters run wild and come up with a farcical ‘partially unlocked’ SKU. What this means is only two cores can be unlocked. I can’t wait for an Intel employee to try and justify this on technical grounds, and I know they will just like they tried to justify locking out ISAs on earlier CPUs. This is just screwing over the customer, they have no excuse. While they could get away with it when there was no competition, we will just point out that the current AMD parts are faster, cheaper, more efficient, and better in every way. And unlocked. 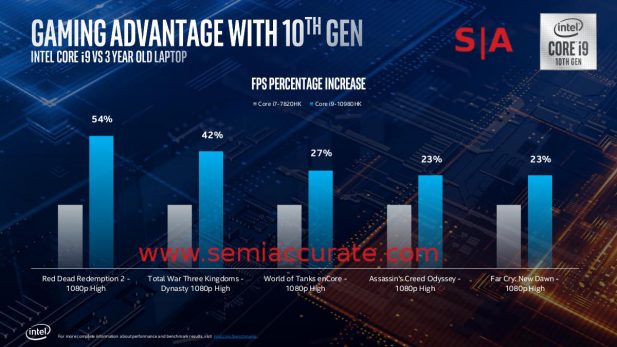 Speaking of performance, Intel put up some pretty impressive numbers for the new -H series. This comparison shows a solid performance gain of nearly 34% in some popular but not overly stressful games. That is pretty good. Until you read the fine print. Lets start out by pointing out the obvious, it is a comparison to a three year old part, in this case an i7-7820HK vs an i9-10980HK, both top of the line in their respective generations.

Since Intel does not provide SemiAccurate with samples to test, we have to rely on Intel’s internal numbers. We asked for comparisons vs the last generation 9-Series -H SKUs and against Ice Lake SKUs but Intel would not provide those. No points if you can figure out why. Comparisons vs AMD’s Ryzen 3K are similarly absent, it is too early for Intel to get and test Ryzen 4K parts but we don’t expect them to ever post those numbers when they get them.

So back to the i7-7820HK vs i9-10980HK, why is this a problem? The laptops tested had very different configurations, mainly in the GPU which is the most important factor in the performance of games. This was pointed out in the fine print but this key and singularly relevant issue was not on the slide above. In any case the 7820HK uses GTX 1080 and 16GB of DDR4-2400, the 10980HK uses a GTX 2080 and 32GB of DDR4-2666. This isn’t a conspiracy, just what the relevant laptops of the day shipped with, the only problem is this wasn’t pointed out explicitly in the hopes that many of the press wouldn’t notice this ‘minor’ oversight.

Looking at the numbers from TechPowerUp, a 2080 mobile has about the same performance as a 1080Ti non-mobile. If you compare the 1080 mobile to a 1080Ti non-mobile part, the Ti scores about 25% higher across a wide range of games. That means if you take that almost 34% lead in the performance numbers Intel provided and subtract out 25%, you are left with 9% uplift from a *THREE*YEAR*OLD*CPU* to today. The doubled memory likely does almost nothing for games performance but the added 266MHz probably adds a fraction of a percent.

Then there is the most damning bit of the comparison vs the three year old 7820HK, cores. That three year old CPU has four cores, the new 10980HK has eight, both with two threads per core. So when you subtract out the GPU performance, that vaunted ‘new’ Comet Lake part on a ‘vastly improved’ process, still 14nm though, gets a 9% uplift under perfect conditions with twice as many cores. Really? Worse yet that 7820 has a 3.1/4.1GHz base/turbo frequency. Intel regressed on the base clocks for power reasons which directly impacts real world performance and responsiveness. Even with an ~25% deficit in peak turbo clocks, that three year old CPU falls behind by less than 10%, and that is with half the core count! Did we mention that the core is the same on both, different code names but both are Sky Lake.

In short there is basically no reason to buy the new 10-Series -H parts over a (likely highly) discounted 8- or 9-Series mobile part, it is the same chip with a different sticker. Best case you are getting a 6% bump over the 9-series if the vendor implemented everything to spec which basically no OEM ever does. Did we mention that the AMD Ryzen 4000 mobile crushes the 9-series in just about every way? Yes, I think we did.

That brings us to the GPU side of the chip, or the majority of the die by area. It is… well we have no idea. It is literally not mentioned anywhere in the slides SemiAccurate got, not even in the backup materials. SemiAccurate had to ask to even get Intel to acknowledge that >50% of the chip even existed. They said, “The internal graphics is Intel UHD Graphics with up to 24 EUs and up to 1.25GHz.” Please do note that this is EXACTLY the same as the previous i9-9980HK. If you had any doubts that the 10-series is the same exact chip as the 9-Series, do you really need any more convincing at this point?

We would love to provide you with more details on exactly that so we asked for the information. Intel of course refused to provide die area, transistor counts, and any information as to how the uncore differs from the preceding designs. They also did not provide any information about sidechannel mitigations in Comet Lake but since it is the same chip as before we will go out on a limb and speculate there are no new security updates here. Price was no provided but we did ask.

Update April 2, 2020 @ 7:10pm: Intel responded to two more questions about security patches and price. Here is what they said.

So in the end what do you have? About as close to nothing new as you can get and not have the OEMs laugh at the new stickers they need to put on the ‘updated’ laptops. The 10-Series -H parts code named Comet Lake bring nothing new to the table other than a feature tweak and tighter binning. In the real world you can expect a 100MHz speed bump for fleeting milliseconds at peak turbo on some SKUs and that’s it. Did we mention AMD’s Ryzen 4000 Mobile parts beat the same chip with a 9-Series sticker on it like a drum?S|A